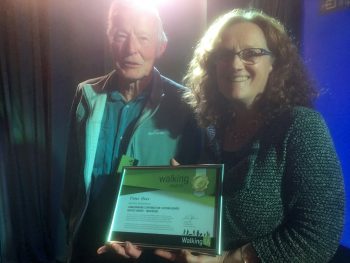 Peter Beer has been a member of Adelaide Bushwalkers (ABW) since 1959 as a prolific walk leader of overnight and extended walks, and organising training weekends for new members. Peter served 2 years in the vital Walks Secretary role to persuade members to lead walks, then a further 4 years as President. In 1982 the club awarded him Life Membership.

Peter contributed to Walking SA as a volunteer from 1996 to 2010. He served as President, Secretary, and representative on Conservation Council of SA. He prepared funding applications & budgets, particularly for walking trails in the Adelaide Hills – notably the Pioneer Women’s Trail, a vision of the Hahndorf Branch of the National Trust SA, where he also worked to mark the trail on site.