To enable the completion of the Pioneer Women’s Trail

This final report is presented as an executive summary in deciding what form the proposed fording of the Onkaparinga should take and, from the several options remaining in an urban fringe rural setting that is undergoing rapid urbanisation, the optimal location for this crossing.

The Pioneer Women’s Trail commemorates the pioneer women and girls who, soon after arriving in 1838, walked overnight from Hahndorf to hawk their produce in Adelaide. Leaving at midnight to walk 35 kilometres along a rough bush track, at 4am they would reach a small stream in the foothills near Beaumont, wash their sore feet and tidy themselves before walking into Adelaide to hawk their produce.

The Pioneer Women’s Trail commemorates the pioneer women and girls who, soon after arriving in 1838, walked overnight from Hahndorf to hawk their produce in Adelaide. They continued to make this journey for almost two decades, leaving at midnight to walk 35 kilometres along a rough bush track. At 4.00 am they would reach a small stream in the foothills near Beaumont, wash their sore feet and tidy themselves before walking into Adelaide to hawk their produce. They would then purchase needles and thread, sugar, tea, tobacco for their menfolk and carry two bricks each to build a new church at Hahndorf.

The Bridge Feasibility Study recommends an optimal location for the bridge and an innovative and cost-effective bridge design. It also identifies the remaining challenges that lie ahead before bridge construction can proceed and before the Pioneer Women’s Trail can be completed to Hahndorf.

In January 2012, The Walking Federation of SA Inc (now Walking SA) was notified by the Office for Recreation and Sport (ORS) that it had been successful in its application for funding under the Community Recreation and Sport Facilities Program (CRSFP) to assess the feasibility of constructing a bridge at Verdun to span the Onkaparinga at Sandow Road Reserve, an unmade section of Sandow Road that remains in public ownership. The overriding rationale behind the grant application was to complete the Pioneer Women’s Trail to Hahndorf and to locate the bridge to provide strategic links to other trails that have been, or are being developed, within the Mount Lofty Trails Network.

The project proceeded according to the timeline attached to this briefing until May 2012, when the two councils involved – Adelaide Hills Council (AHC) and District Council of Mount Barker (DCMB) recognised that the Verdun Bridge Feasibility Study had the potential to become a significant source of expenditure to the two councils with administrative responsibility for this historically “first leg” of the Pioneer Women’s Trail. Matt Wittwer (AHC) and David Cooney (DCMB) therefore required an independent consultant to determine the optimal location for a pedestrian/cycling bridge. They recommended Meechi Road Consulting who had been previously contracted by the AHC and DCMB to develop the Adelaide Hills Trails Network Strategy (AHTNS) and Regional Trail Identity Signage concepts.

The Meechi Road Consulting study was conducted by Libby Dowling in March 2013. Libby was asked to identify and assess the several route options and crossing points available that would best integrate with the AHTNS. She identified four potential routes to connect the Pioneer Women’s Trail to Hahndorf:

The report, Extension of the Women’s Pioneer Trail to Hahndorf Site Study, considered the advantages and disadvantages of each and concluded that option 1 and option 2 were the best of the crossing points available to the Pioneer Women’s Trail, the Heysen Trail and the Amy Gillett Trail.

All four route options are marred by road design and existing bridge infrastructure inadequacies re pedestrian and cycling access and safety. Also, the design of existing vehicular bridges made no provision for safe pedestrian lanes. As a result of rapidly increasing urbanisation in the district, heavier vehicular traffic flows along Onkaparinga Valley Road and Mt. Barker Road will require councils to provide for safe (shared) pedestrian/bicycle paths as suburbs extend into rural land in the Adelaide Hills.

While none of the bridge location options identified were considered optimal, a bridge crossing at Sandow Road Reserve provided the best links with the existing trail network and the fewest infrastructure challenges, although several pinch points1 along Onkaparinga Valley Road – especially between Sandow Road and Silver Road will require negotiation between Adelaide Hills Council, The Department of Planning, Transport & Infrastructure (DPTI) and adjacent landowners.

Were the two existing road bridges on the Mt Barker Road (North westerly) approach into Hahndorf to be replaced by new bridges incorporating pedestrian laneways, the Mount Barker Road historic link would become more cost effective. While this link was considered much less aesthetically attractive due to its proximity to Mt. Barker Road, it would require negotiation with landowners at fewer pinch points, although links to the Amy Gillett Bicycle Trail and the Heysen Trail would be less direct. However new bridges with integrated pedestrian lanes on Mt. Barker Road are unlikely to be constructed any time soon although AHC and DCMB will have already begun to address the issue of pedestrian and cycle pathways in Verdun and Hahndorf due to the rapid urbanisation in this urban-rural fringe area.

The Meechi study vindicated the Walking Federation’s (now Walking SA) preferred option for a bridge to span the Onkaparinga at the intersection of Sandow Road Reserve and the Onkaparinga River as shown in the map extract. The site is also located on the shared (Onkaparinga River) boundary of the Mount Barker and Adelaide Hills Council areas: 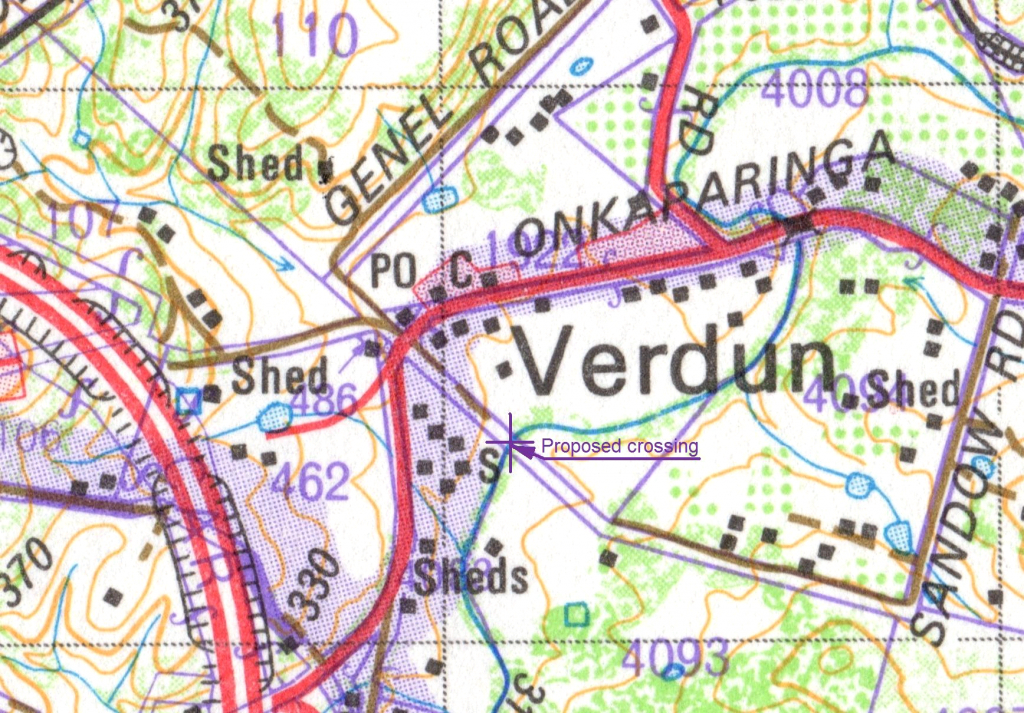 View location maps of the road reserve and adjoining allotments:

The Sandow Road access from Verdun to the proposed bridge consists of a short bituminised section of made road within the grounds of the Hills Christian Community School but soon ends in a heavily weed-infested unmade road reserve. This section of the Sandow Road Reserve lies within the boundary of AHC. The reserve remains in public ownership and is not subject to any leasing agreement with adjacent land owners. The longer section of Sandow Road is on the opposite (southern  Hahndorf) side of the Onkaparinga, and consists of a short section of unmade Road Reserve (URR) on an alignment bearing South East of the proposed crossing which contains a wood lot planted by persons unknown, presumably an adjacent land owner and is loosely fenced across with rusty barbed wire in poor condition. Beyond this URR section is a vehicular track which provides access to adjacent properties. There is also a right angled alignment bearing approximately NNE which is managed by DCMB.

The evaluation process for deciding where the bridge will be located

The criteria considered in determining the optimal pedestrian crossing are identified in following document: Criteria for deciding Bridge Location.

The Sandow Road crossing has long been considered the most viable option from a walker’s perspective as it takes walkers away from the very busy Mount Barker Road where the existing bridges make no provision for pedestrians. These pinch points pose a significant risk to pedestrians seeking to cross them. The Walking SA-preferred route accesses the proposed crossing via Ambleside Road, Selma Avenue, Heysen Road and an unsealed section of Sandow Road which aligns with an unmade section of Sandow Road Reserve. (See the Property Locator Browser map.) While it is not essential, the short cut identified in this link which runs through the Cedars property may be of commercial advantage to the owners of the Cedars. An easement would need to be negotiated through DCMB and ORS. Access through the Cedars (Heysen) property would eliminate a pinch-point of concern at Onkaparinga Valley Road between Heysen Road and Sandow Road and would avoid the need to cross the Onkaparinga Valley Road twice to use the triangular section of Reddens Road immediately opposite Sandow Road (eastern-most exit) at its junction with the Onkaparinga Valley Road. (Refer to the above map for these two sections of Sandow Road which form a right angle with each other.)

The Onkaparinga Valley Road connecting Heysen Road, Sandow Road, Verdun with Silver Road (the current location of the Pioneer Women’s Trail Trailhead) is a very busy road with several pinch-points that would require negotiation by AHC with The Department of Planning, Transport and Infrastructure (DPTI) and adjacent landowners to ensure trail user safety when walking between Sandow Road (western-most exit) and Silver Road.

The proposed bridge on Sandow Road is easily linked to other trails in the vicinity.

On the recommendation of Matt Wittwer, Civil Projects Coordinator, Engineering AHC, three engineering firms were identified and invited to submit tenders for the design of a bridge spanning the Sandow Road Reserve at Verdun. They were Magryn, MLEI and Combe Pearson Reynolds. Of these, Magryn and MLEI responded with a design concept.

The Magryn Engineering design concept was chosen on the basis of experience through their collaboration with engineer, Franek Savarton whose innovative work in Saudi Arabia with “breakable bridges” and their structural innovation of hand rails that would reduce hydraulic impact in flood conditions making it possible for a lower and less costly, but nevertheless robust bridge to be considered. Consultant Engineer, Christiane Husmann of Magryn Engineering was assigned to design a bridge structure having regard to 50 years of flood data provided by AHC. View the proposed bridge site on this map of flood data (circled).

View the Revised Design Revision A.

Following the submission of the design of the bridge by Christiane Husmann, and at the recommendation of Matt Wittwer – Civil Projects Coordinator, Engineering (AHC), a peer review process was undertaken by James Pierce, James Pierce & Associates, Consulting Engineers – Civil and Structural, now based in Queensland.

In response to James Pierce’s review of the design, the following minor changes were made as a result of the peer review by James Pierce with input from Matt Wittwer and Christiane Husmann:

This feasibility study concludes that the bridge will be a cost effective addition to the Adelaide Hills Trails Network and will provide a safe crossing of the Onkaparinga River – especially as the peak of river flooding corresponds with the peak of walking activity. A cheaper, “fair weather” crossing such as a ford or stepping stones is also not recommended due to the proximity to the nearby Hills Christian School, Verdun. The bridge on Sandow Road Reserve will provide strategic links to the Heysen Trail, the Amy Gillett trail and to the proposed trailhead at Pioneer Park, Hahndorf and will allow the Pioneer Women’s Trail to be completed from Silver Road to Hahndorf. However several pinch points along Onkaparinga Valley Road between Sandow Road and the existing Silver Road trailhead are of concern and will need to be addressed. An easement from Heysen Road entrance to “The Cedars” through to Sandow Road Reserve – while not essential   will eliminate the need to use the two short triangular sections of Redden Road currently used by the Heysen Trail. This possible easement will need to be negotiated by DCMB.

The challenge will be to attract sufficient funds from a future Community Recreation and Sport Facilities Program (CRSFP) and other State and Federal Government grants, from AHC and DCMB and from corporate sponsorship to bring Christiane Husmann’s bridge design to fruition and link the Pioneer Women’s Trail to the Adelaide Hills Trails Network.

This Bridge Feasibility Study is supported financially by the Government of South Australia (Office for Recreation and Sport), The Adelaide Hills Council, the District Council of Mount Barker and Walking SA Inc.