The conference will be held at Flinders University’s Victoria Square campus, the same venue as last year. Walking SA is supportive of this conference and keen to include a high level of walking related content. There is currently a call for papers so the conference organisers are inviting abstracts addressing the conference theme or other topics related to walking and cycling. They invite presentations both on research and practice.

The volunteer organising committee is led by Peter Lumb and a number of walking and cycling related specialists supported by a highly qualified reference group.

Last year’s conference attracted a broad spectrum of presentations and interactive sessions by a range of international, national and local speakers. They added valuable content into a wide range of walking and cycling issues. Even if you don’t wish to present you are encouraged to attend the conference. Walking SA will provide further information as the program evolves.

Over the last eighteen months the Lavender Federation Trail has been extended by 106 kilometres, taking the end point from Eudunda to Clare, and making the trail a total distance of 320 kilometres. It now crosses the Heysen Trail at Webb Gap where the two trails will share the section that transverses the Tothill Ranges from west to east. It’s a fitting meeting of trails, as Terry Lavender played in a key part in initiating the Lavender Federation Trail, and in developing the Heysen Trail.

Two major member organisations of Walking SA, South Australian Recreation Trails Inc. and the Friends of the Heysen Trail, are celebrating this unique crossing on Sunday April 17th, 2016. There will be local walks from 10.00am onwards and there will be an official opening ceremony at Webb Gap at 12 noon. 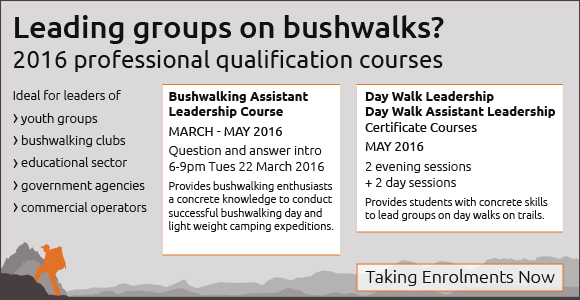 A course conducted by Bushwalking Leadership SA twice during 2016. It is the required minimum qualification for leaders intending on working with DECD schools and many independent or CEO schools.

The practical workshops and 3 x day field experience will be supplemented by an online eLearning component.

For those interested in shorter activities, training will be conducted in May 2016 for Day Walk Leadership and Day Walk Assistant Leadership Courses to train aspiring leaders to conduct successful day walks in tracked areas.