During August 2016 two new walking trails are being officially opened. 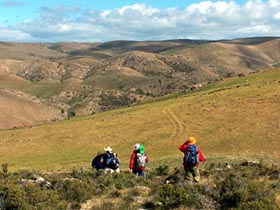 The Sanderston Trail is a five kilometre linear trail across high ridge country adjacent to the Saunders Gorge Sanctuary. The trail has been 12 years in the making. The trail is a challenging walk with some steep sections but rewarding with spectacular scenery revealing many kilometres of unbroken dry stone walls. From the western end of the Sanderston Trail there is a six kilometre link trail connecting to the Springton Loop Trail which then intersects with the Lavender Federation Trail.

Guided walks are available at 10.00am. At 12.30pm an official opening ceremony will be held at the Three Chain Road trail head sign which is nearby the Saunders Gorge Sanctuary. This is to be followed by lunch and at 2:00pm trail walks on the Sanderston Trail and into Saunders Gorge. The Saunders Gorge walks usually attract a fee of $10 for adults, $5 children or $25 for a family but at no cost on the opening day. 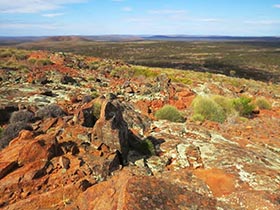 There are currently two walking trails on the Hiltaba Nature Reserve, with a third trail, the Barbara Hardy Walking Trail opening on Friday 26th August.

There are plans for a total of five walking trails at the Hiltaba Nature Reserve to honour the four founders of Nature Foundation and also the major supporters Bob and Betty Lewis.

Construction will soon start on the Murray Coorong Trail (MCT) thanks to a massive financial boost from the State Government’s Community Recreation and Sport Facilities Program.

The project was awarded $280,000, part of a State Budget allocation of more than $40million to sport and recreation facilities across South Australia.

The three Councils leading the project – Mid Murray, Coorong and Murray Bridge – will collectively contribute a further $101,700 during 2016-17. This will complete construction of 25 kilometres, being the Trail’s first stage in each district.

Once complete, the 450 kilometre trail will promote wellbeing, encourage tourism and business expansion, showcase our River and Coorong, and conserve and protect biodiversity. Work on this project began in 2012, with careful planning ensuring a purpose built trail is designed for walking and bike riding, with the eventual goal to link Cadell in the Riverland to Murray Bridge, and on to Salt Creek in the Coorong.

Mid Murray Council Mayor Dave Burgess said he expected the Trail to become a national icon, with the combined funding a coup not only for community health, but also for the region’s economy.

“The Murray Coorong Trail will help establish the Murray and Mallee as one of the most attractive recreational destinations in our State,” Mayor Burgess says.

“The trail will run along some of our most beautiful stretches of the River Murray and Coorong, showcasing our region to the growing population of walking and cycling enthusiasts who visit.”

Coorong District Council Mayor Neville Jaensch said this project would add strength to the raft of recreational activities already on offer across his district.

“We have been investing heavily in recreational facilities across our district which support people of all ages and abilities, and this major trail will connect them all,” Mayor Jaensch said.

“While the majority of the trail runs along the length of the Murray and Lakes, over time there is capacity to extend recreational opportunities to other communities.”

Rural City of Murray Bridge Mayor Brenton Lewis said the Trail would have an incredibly positive impact on the local community.

“This trail provides a facility for families, older residents, fitness enthusiasts and anyone else interested to get out and be active while exploring our beautiful local area,” Mayor Lewis says.

The Murray Coorong Trail Management Committee will begin detailed planning and community engagement before construction on each of the three Stage One sections begins later this year.

Walking SA has been successful in receiving funding from the office of Recreation and Sport for its Walktober 2016 initiative. This is a significant opportunity for Walking SA’s members to promote walking in their club or organisation as well as reach out to the walking community at large to promote our vision of more people walking more often. Over the next few months we will be establishing a program for Walktober 2016 and we are actively seeking involvement from all our members to be part of it. We would like members to:-

In recent months we’ve listed 15 new walks in our Find a Place to Walk directory.

Over the last twelve months or so the directory has expanded to over 180 trails around the state, so there are plenty of places to explore for walking. 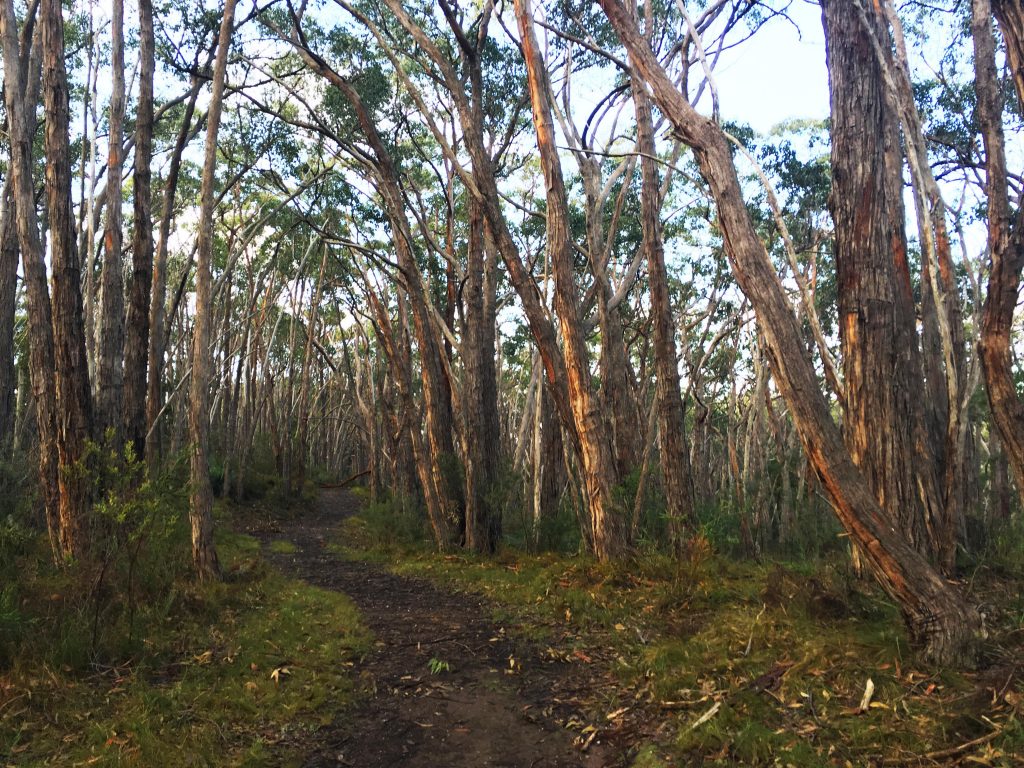 Hike along fire tracks & walking trails, through a secluded forest to the summit of Mt George, with magnificent views from a rocky outcrop lookout.

Enjoy an easy stroll through the stringybark forest near Stringybark Campsite. The walk is suitable for children, explore the forest, mushrooms and birdlife. The walk is especially enjoyable near sunset and sunrise. 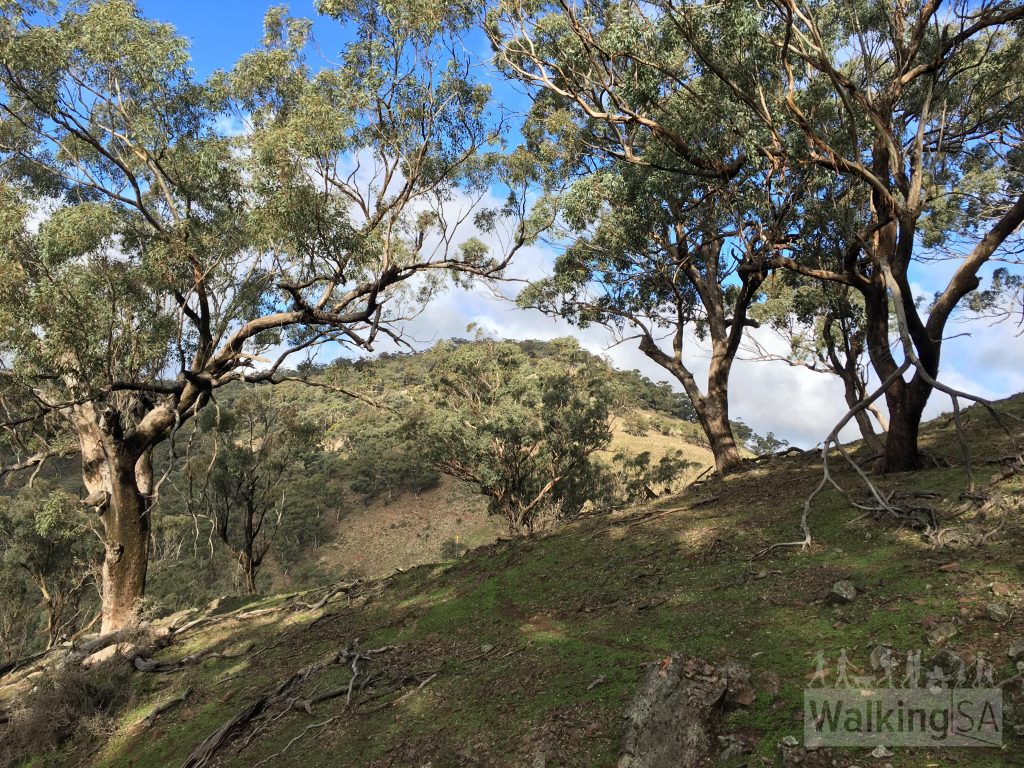 A circuit hike along the Heysen Trail up to the summit of Mt Brown. The trail is well marked and gradually climbs the summit, taking in Waukarie Falls and Bald Hill Viewpoint. 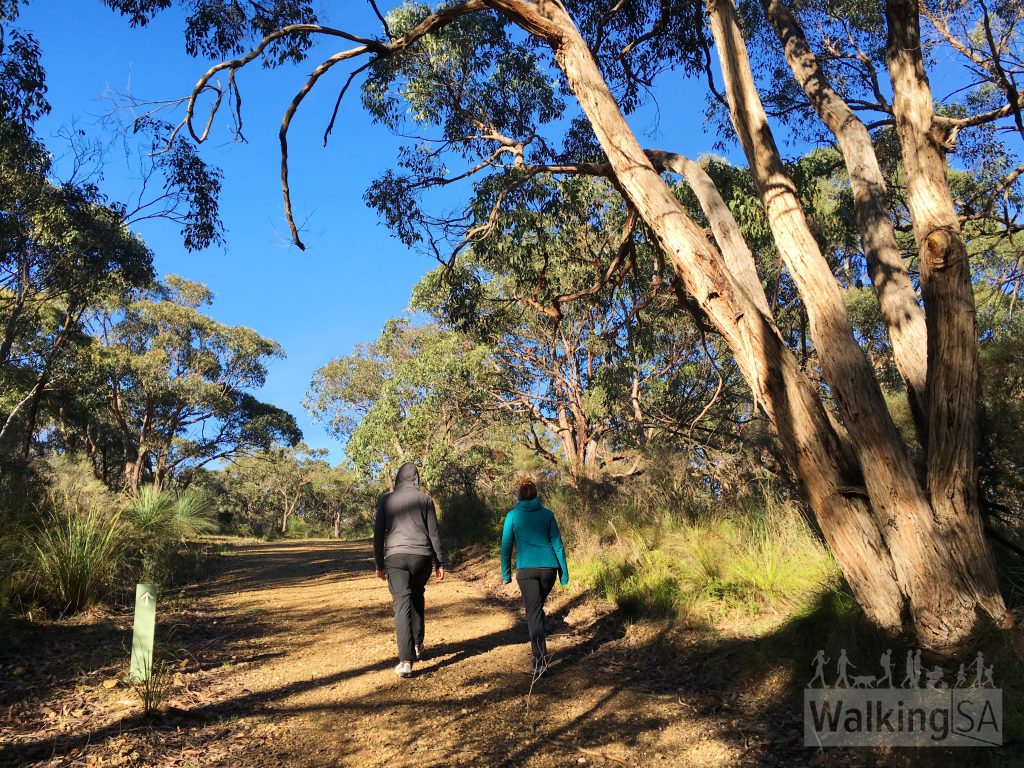 Enjoy a walk through the regenerating forest. Watch out for echidnas, kangaroos and birdlife. During late winter and spring you’ll see wildflowers along this trail. 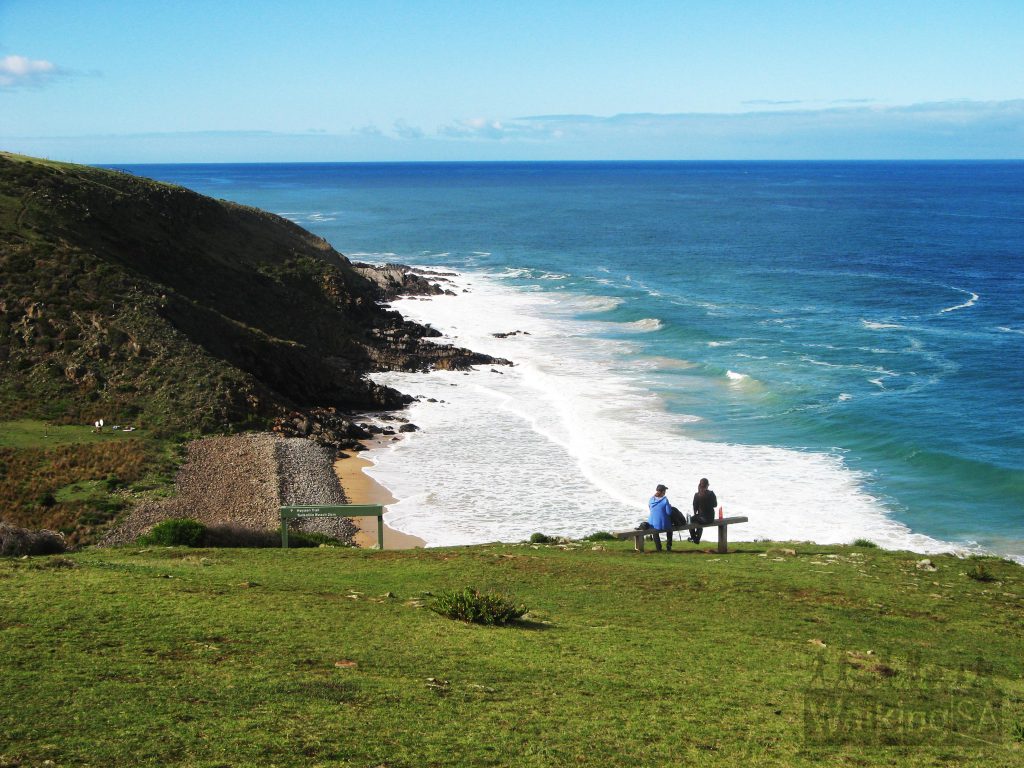 Enjoy a well-graded trail with breathtaking views of Kangaroo Island, The Pages Islands and Tunkalilla Beach. Watch out for dolphins at Boat Harbor Beach. 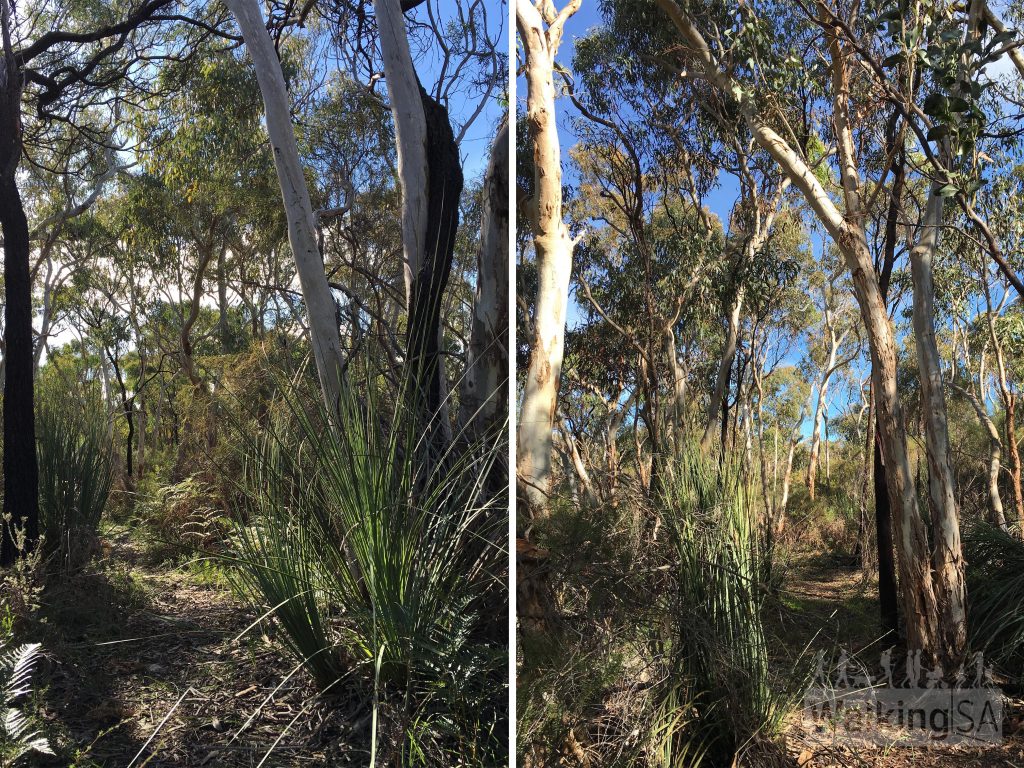 Wander through this forest on walking trails and fire tracks. The trail is well marked. We recommend this extra eastern trail as especially delightful to walk through, with some good views. 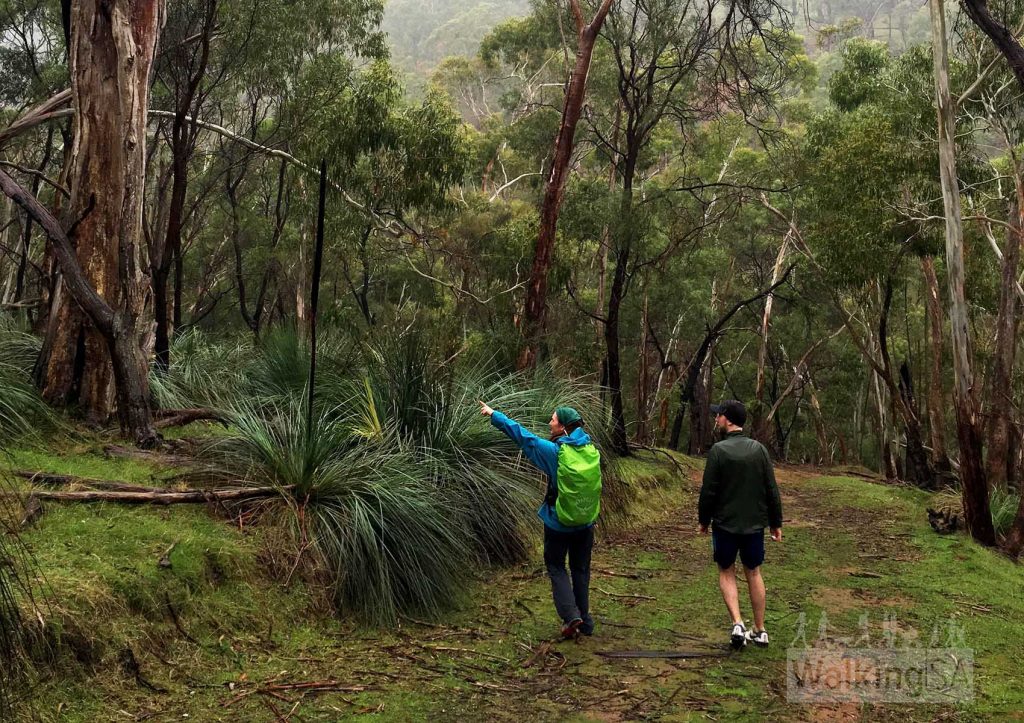 This hike through the rugged hills of Montacute Conservation Park is challenging, but rewarding with excellent views. 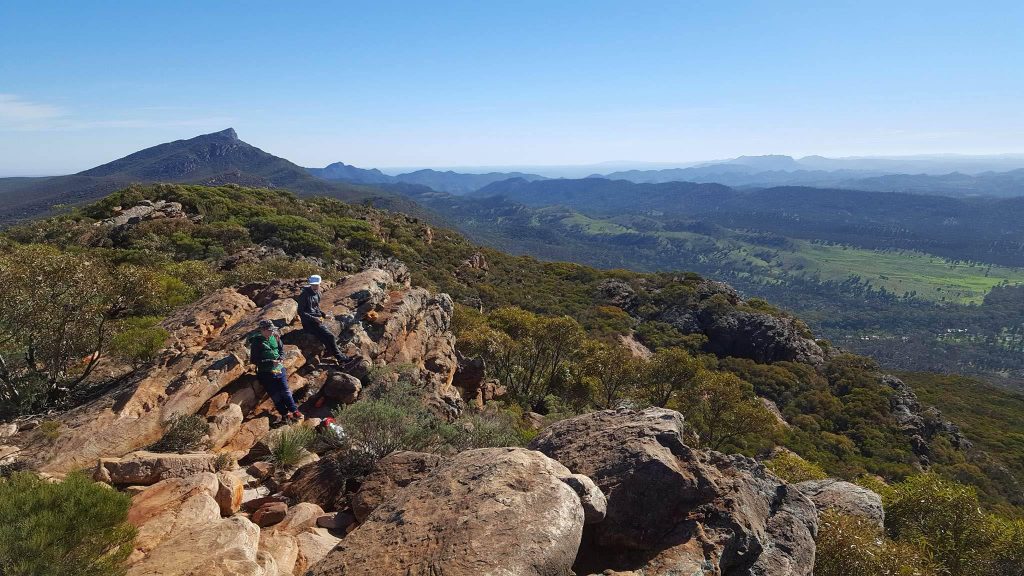 A steep rocky climb to the summit of Mount Ohlssen Bagge, with rewarding views both inside and outside the Pound. Look for reptiles along the way. 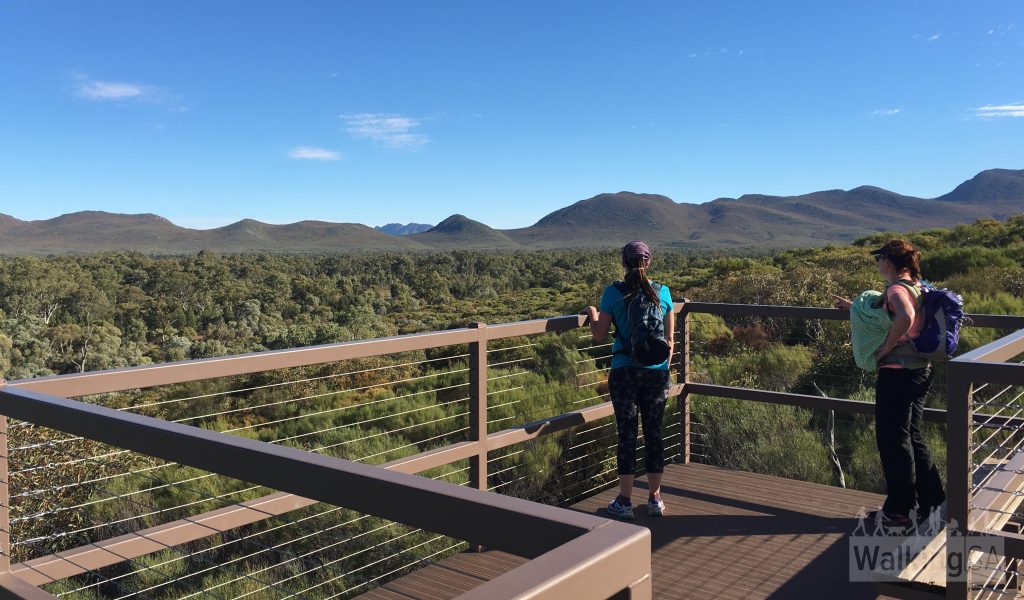 Walk through the Pound Gap into Wilpena Pound, and up to one of the Wangara Lookouts for panoramic views into the inside of Wilpena Pound. 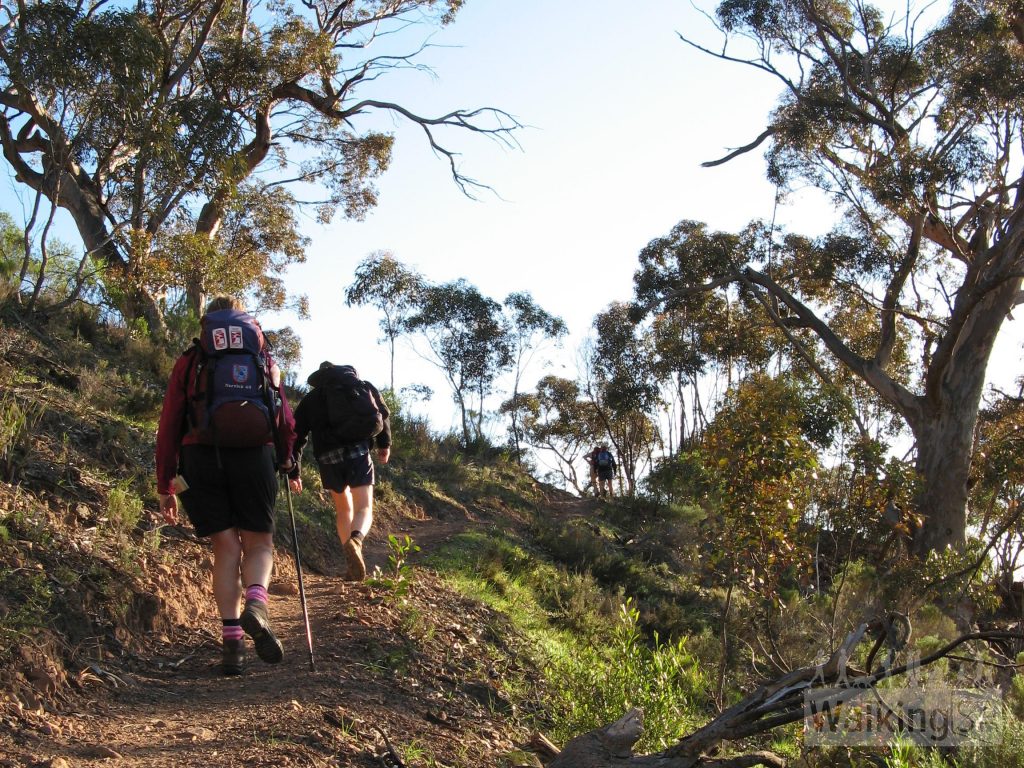 Hike along the Heysen Trail up to the summit of Mt Remarkable. The trail is gently graded as it contours up to the summit. You can start the trail from the main street of Melrose, walking up to the Monument on the bitumen road past the caravan park. When walking across the scree slopes watch out for the remnants of a small plane that crashed here in 1980. 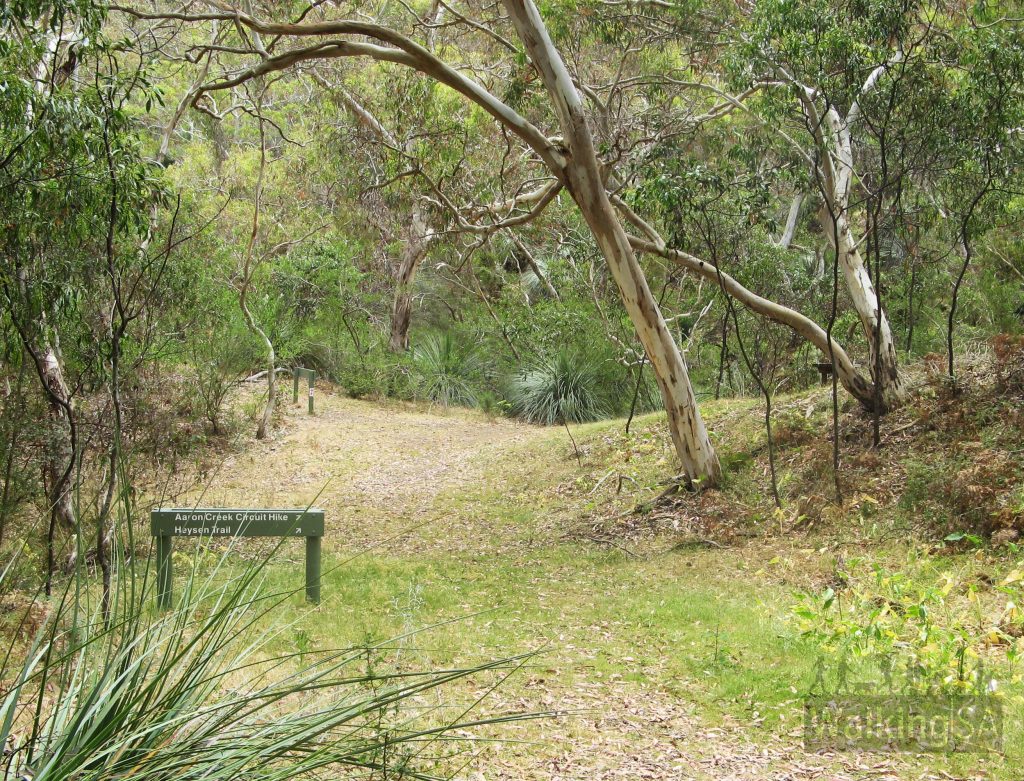 Explore the grasslands with views and kangaroos, before descending into Aaron Creek with its lush vegetation and winter waterfall. Take a picnic along to enjoy at the picnic table at Eagle Waterhole Campground. 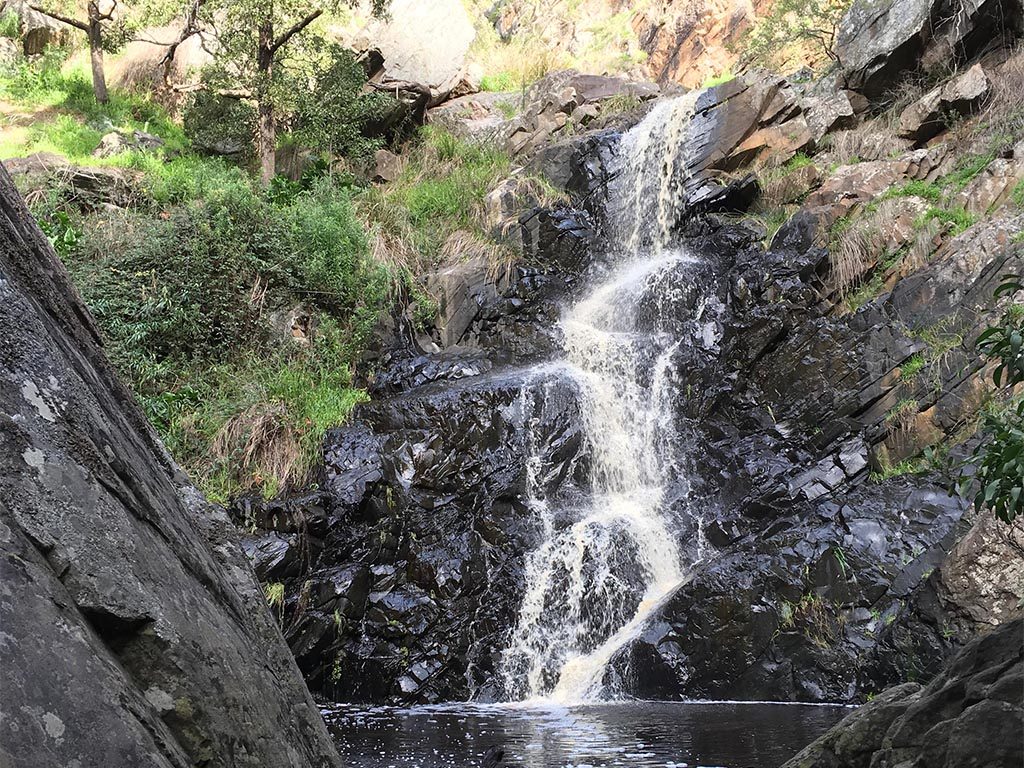 Enjoy a short 250m walk with the family. The trail starts at the picnic area, following the creek upstream for 250 metres to reach the rock pool & waterfall. There are several picnic areas along the way. 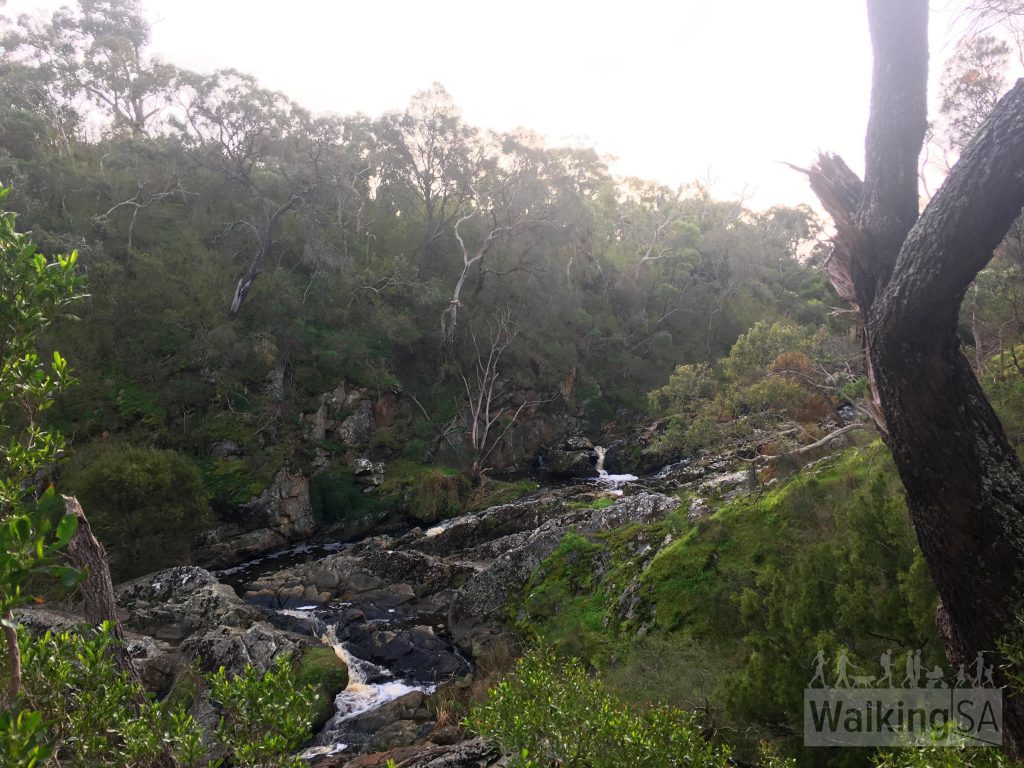 Enjoy a short walk to the lookout to see the waterfalls, as water cascades over numerous pools. The lower car park is adjacent to a picnic area. 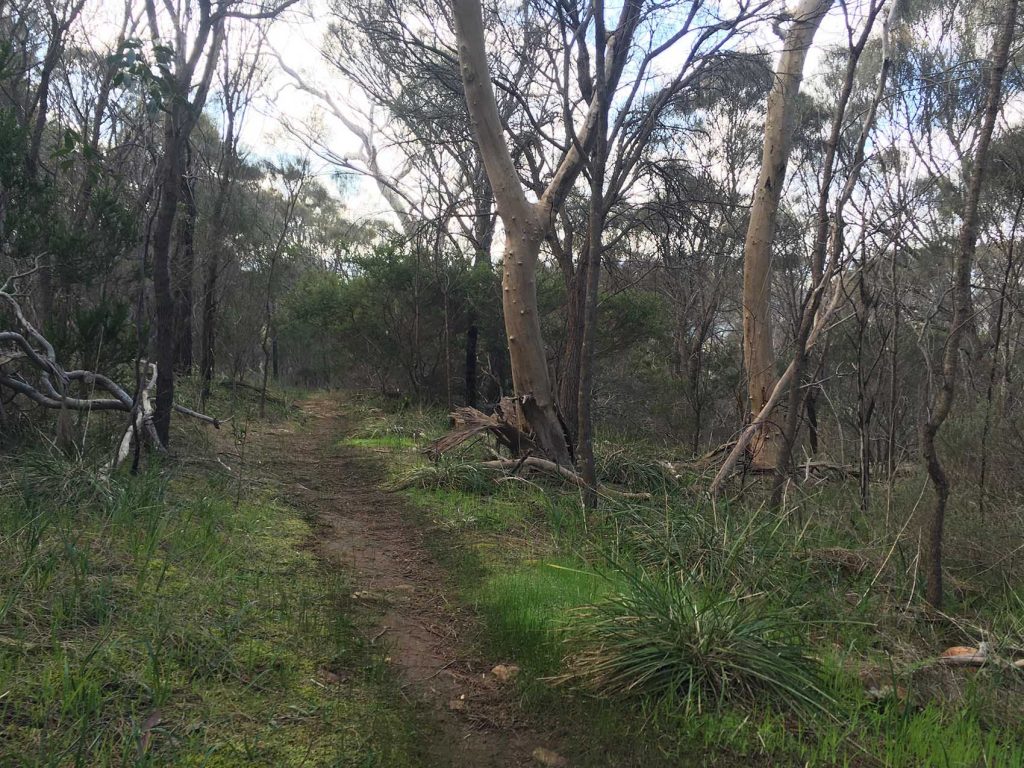 This 2.4km circuit hike is an alternative walk to the easy Summit Walking Trail. The trail is easy to follow, and provides views to the east and west. 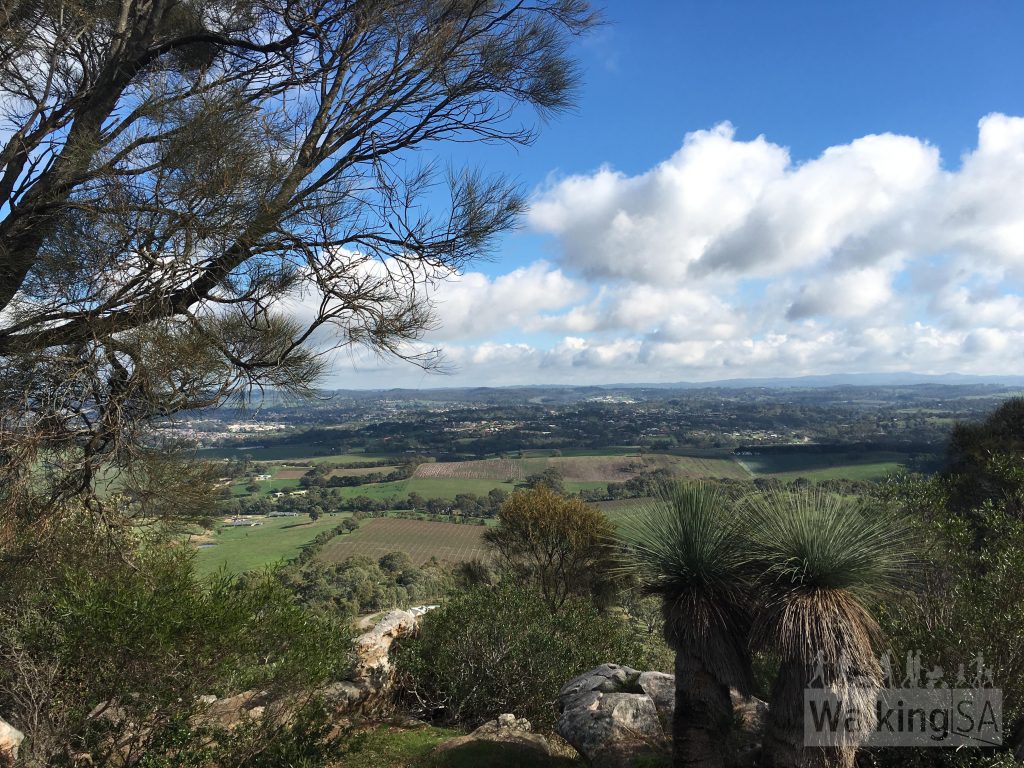 The 500 metre return trail is an easy walk, & passes a lookout area with picnic tables before reaching the summit. Begins at the far end of the summit car park. 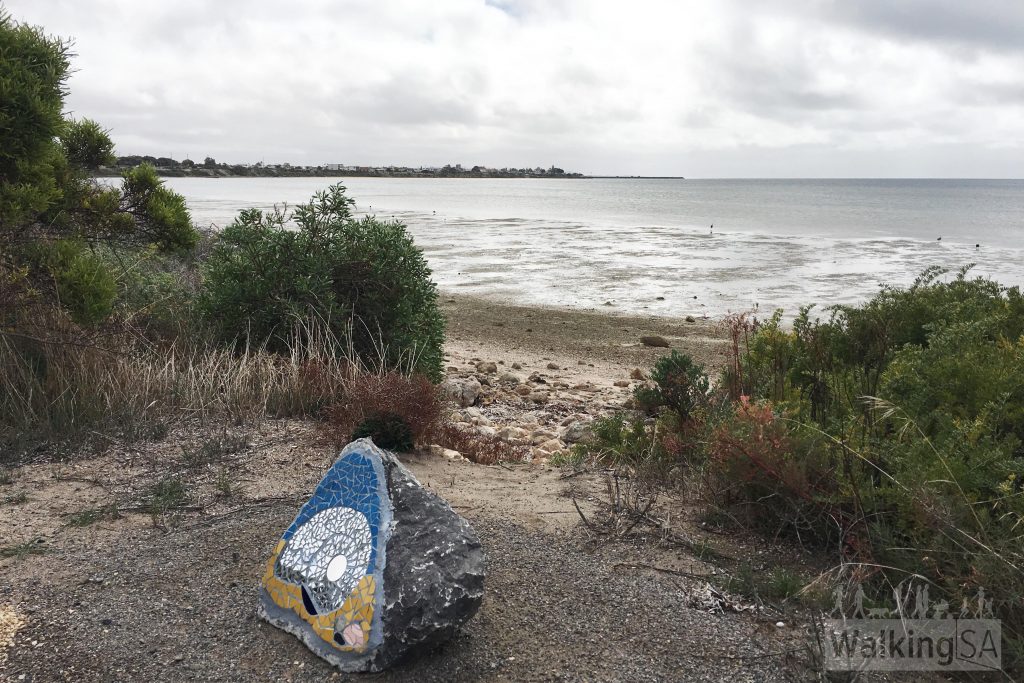 The Mosaic Trail – Edithburgh to Sultana Point, Walk the Yorke

An walking trail with interpretive signage and 94 mosiacs. The trail begins from the main jetty in Edithburgh, following the coast around to Sultana Point. The walking trail is suitable is hard gravel, and is suitable for wheelchairs, prams, walkers and cyclists. 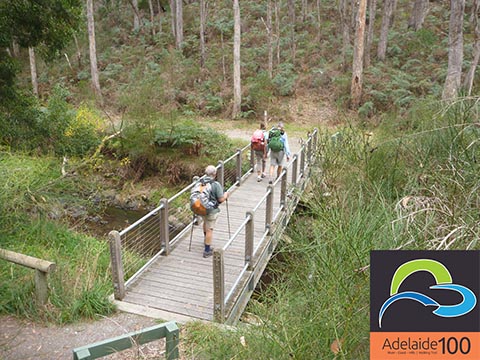 Walking SA has a vision for the establishment of Adelaide100 initiated by passionate Board Member Jim McLean. Adelaide is renowned for its beautiful parks and reserves that encircle our city, enhance our suburbs, thread along our coast and feature throughout the hills. Our landscape, and nature reserves coupled with a favourable climate and fantastic food and wine make Adelaide one of the most liveable places in the world. There is no other city in the world with a signposted loop trail that traverses city, coast, bush and suburbs, incorporates shorter or longer walks, provides accommodation, food, historical and cultural information and links up and promotes other trails. The Adelaide100 will link up existing infrastructure, creating short distance links and trail loops to create a 100km network.

Walking SA has been working closely with Board member Jim Mclean in further developing his vision for the Adelaide100 walking trail. This is progressing and we have recently held meetings with Department of Environment, Water and Natural Resources (DEWNR) staff to assist us in addressing specific trail details to enable the trail to utilise the maximum number of existing well maintained trails. We have also been meeting with SA Tourism Commission who are providing invaluable advice in moving this project forward.

More recently Jim and a small group walked the whole trail including addition options to “test it out”. It is fair to say that it fulfilled our vision of being a unique and enjoyable walking trail that we believe can have great appeal to south Australians as well as interstate and international tourists. Walking SA is greatly appreciative of the financial support from The Friends of the Heysen Trail and Skyline Walkers, highly valued member clubs of Walking SA.