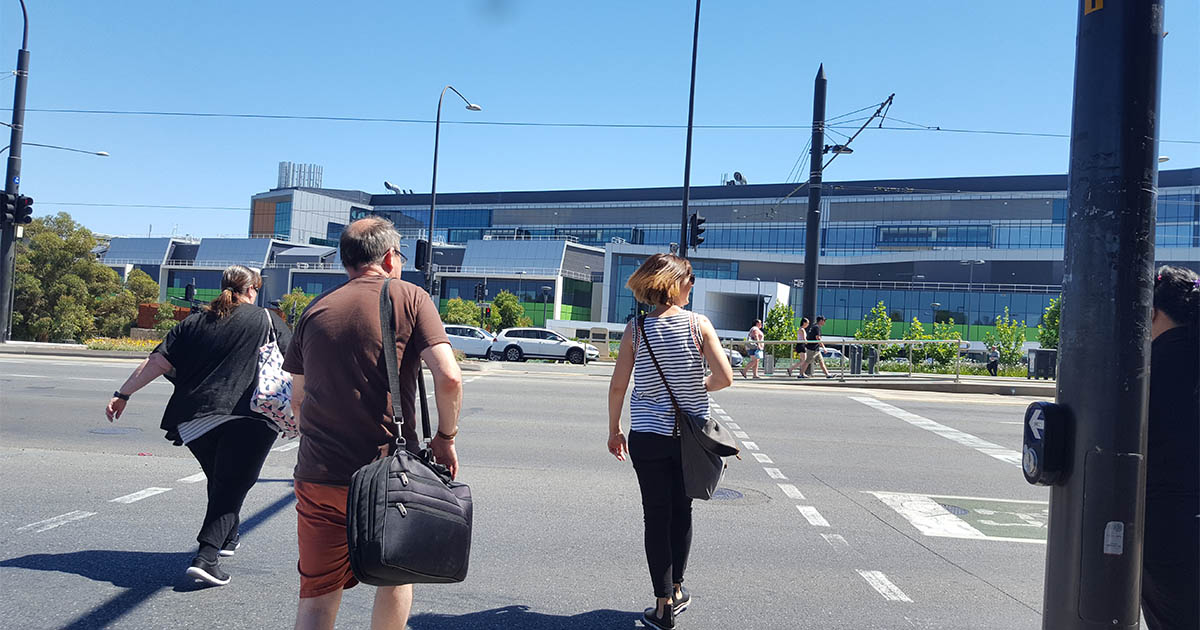 To cross from the parklands to the nRAH took 5 minutes over three sets of lights, and to cross from the nRAH over to the Newmarket we waited 3 minutes and 30 seconds for the green man, which did not stay green long enough for us to get across all of the 6 car lanes.

It is generally taken for granted that we measure current motor vehicle travel and predict future vehicle travel through transport models. But the measurement of walking is often piecemeal and reactive. There are few serious attempts to systematically estimate future walking. In addition the things that we value the most in our streets, such as the quality of the public realm, places to sit, and space for pedestrians are rarely given a quantified value, and hence are often value engineered out when budgets get tight.

That’s according to Darren Davis, Transport and Land Use Integration Programme Manager from Auckland City Council when he was hosted by the Heart Foundation for a 3 day visit to Adelaide. Darren presented to the South Australian Active Living Coalition on his work boosting the number of people using public transport and, walking and cycling in Auckland.

Darren commissioned the research report Measuring Pedestrian Delay into how much walking is done in Auckland’s city centre, how much delay pedestrians experience due to traffic lights and crowded footpaths, and how much this costs both them and the economy.

The research has calculated that the benefits of a planned conversion of Auckland’s main shopping street to a transit mall will be over $700,000 benefits per block per year. The annual cost of pedestrian delay at just one of the intersections measured was $2.2M.

While he was in Adelaide Walking SA board members Tuesday Udell (Heart Foundation) and Ian Radbone (BISA) took Darren for a walk down North Terrace to the new Royal Adelaide Hospital. There are a number of issues for those walking and cycling in the west end of North Tce, including the need for safe crossing points, and improving the pedestrian priority at existing signalised crossings. To cross from the parklands to the nRAH took 5 minutes over three sets of lights, and to cross from the nRAH over to the Newmarket we waited 3 minutes and 30 seconds for the green man, which did not stay green long enough for us to get across all of the 6 car lanes.

The Walking SA board members will be meeting with DPTI executive later this month to discuss how to make things better and safer for pedestrians at the western end of North Terrace.

South Australian Recreational Trails Inc (SARTI) is an organisation member of Walking SA. The Lavender Federation Trail is a project of SARTI.

SARTI and Friends of the Riesling Trail invite you to attend the celebration of the completion of the Lavender Federation Trail which commenced in 1997 and will be finished in 2018. The latest section, from Marnoora to Clare will be opened as part of the day. There will be displays and information from the walking community, outdoor stores and promoters of healthy lifestyles.

All are welcome. Map 6 covering the Manoora to Clare section of the trail will be launched at this event.