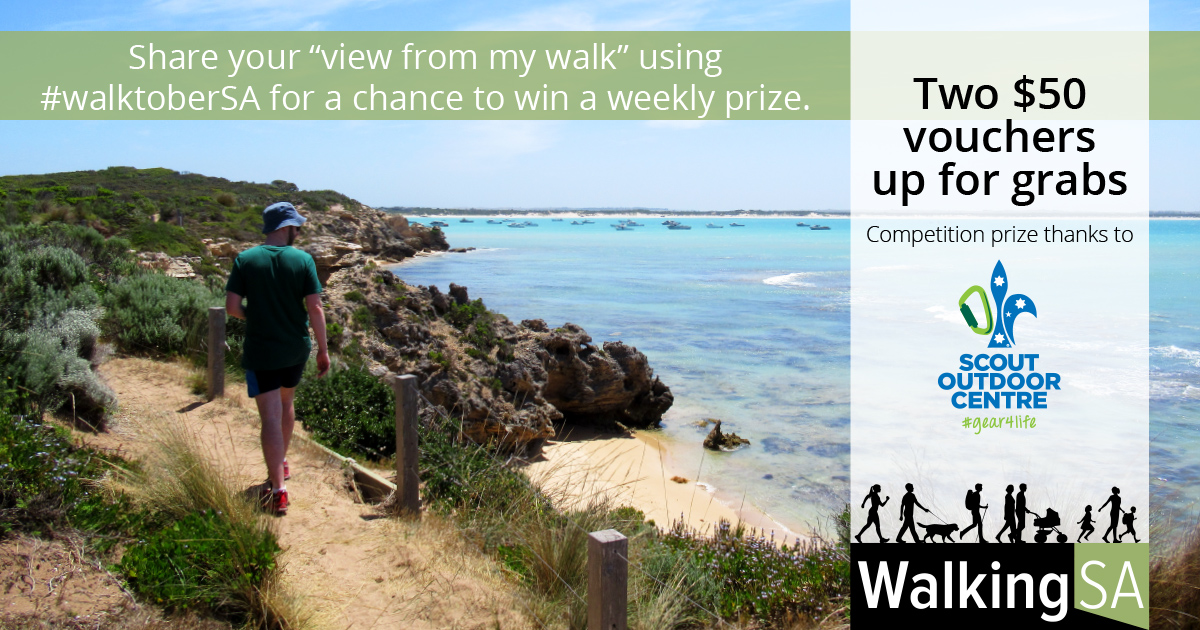 Share your “view from my walk” photo using the hashtag #walktoberSA to enter our competition for a chance to win a weekly prize. Thanks to Scout Outdoor Centre there are two $50 vouchers up for grabs each week throughout October.

Take a walk in a nearby park, along the beach, along a river, in a national park or on your walk to work – anywhere in South Australia. With over 600 ideas of places to walk around SA there’s always somewhere nearby to explore on foot.

View what others have shared.

This October there are two competitions:

The competition is part of Walktober – celebrating walking throughout October. 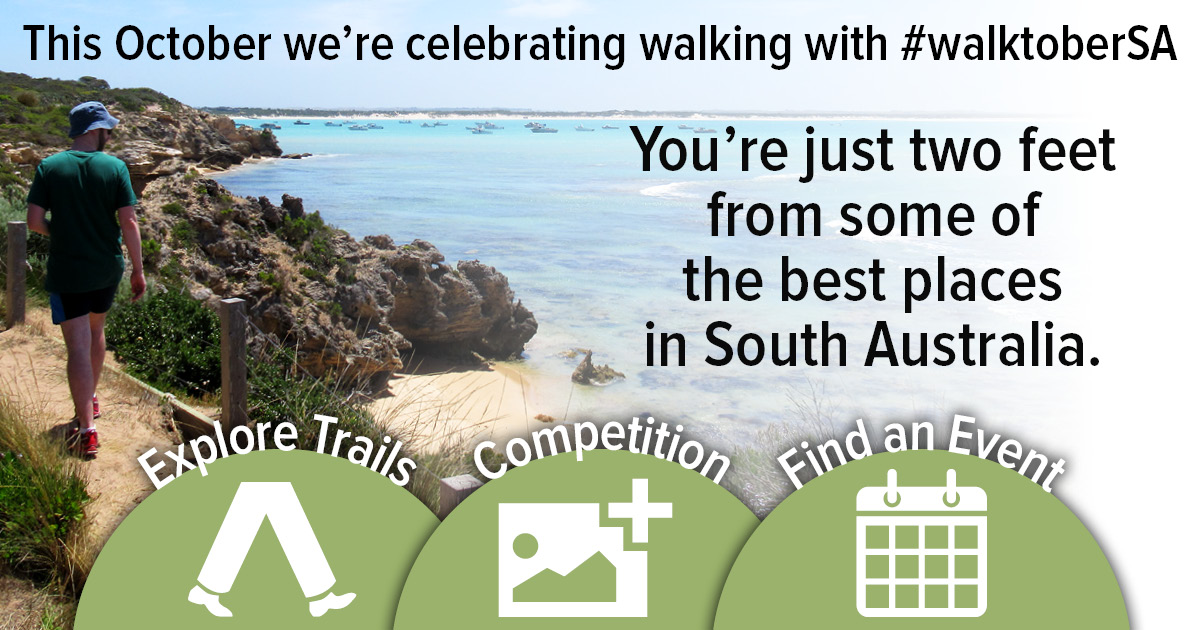 Throughout October we’re celebrating walking and promoting it’s benefits for everyone with WalktoberSA.

October is ideal for walking – the temperatures are mild and the evenings are getting longer.

You’re just two feet from some of the best places in South Australia.

Find out more at walkingsa.org.au/walktober

Murray River National Park is the National Parks and Wildlife Service SA Park of the Month for September 2019.

We’ve outlined the three walking trails in the park. Nearby there’s more of the Riverland and Murray River to experience on foot, and we’ve included some of the best ones below.

The Murray River National Park provides great opportunities for a variety of recreational activities such as walking, canoeing, bird watching and bush camping in a near natural environment. The park is divided into three separate areas: Katarapko (Winkie), Lyrup Flats (Lyrup) and Bulyong Island (Renmark). As these areas are separated by towns, visitors will need to ensure they familiarise themselves with maps of the region. 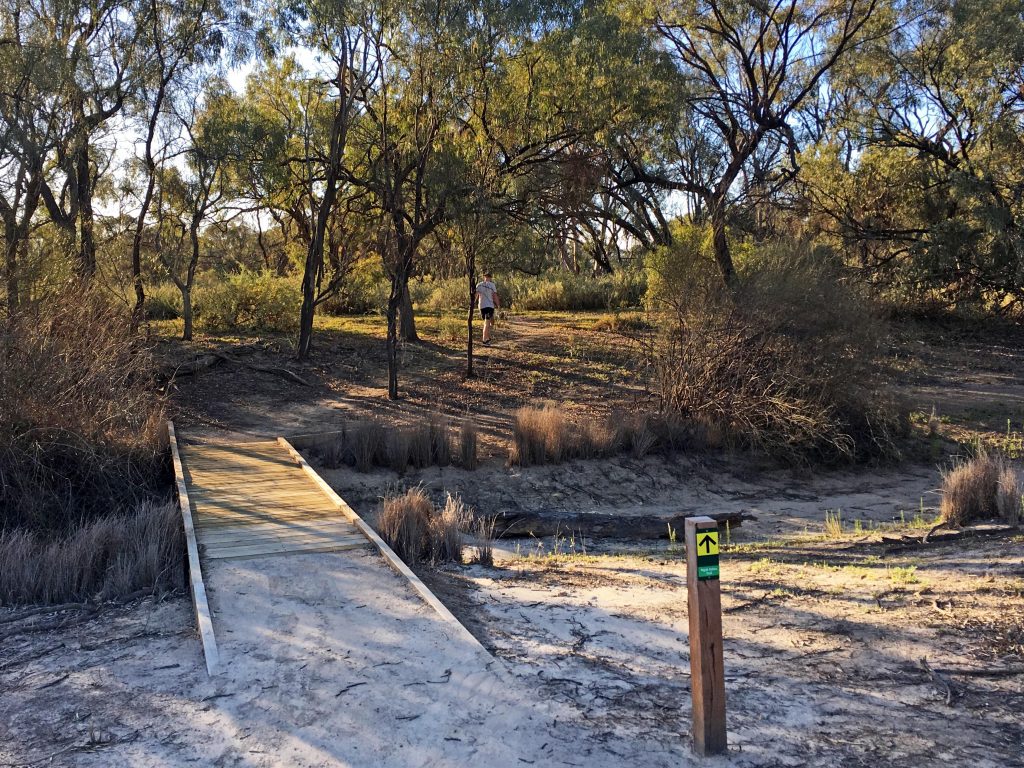 This walk begins at the car park just off Lock 4 road and winds its way through the Ngak Indau wetland, out to the river and back again. Check out the wetland birdlife like spoonbills, an array of duck species, herons and whistling kites. 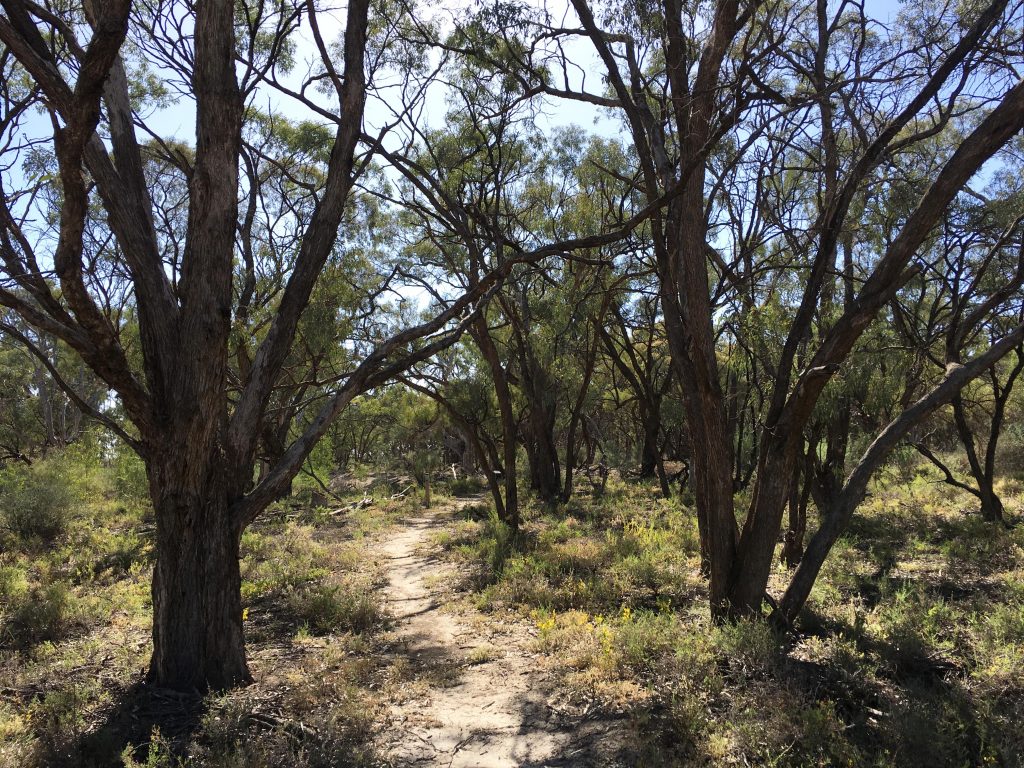 Walk along the Katarapko Creek bank and see the range of life found on the flood plain and how the plants and animals live together through seasonal water changes. Unfortunately, as at January 2018, many of the interpretive signs have faded or are missing. However the trail is still well marked, having recently had new directional signs installed. 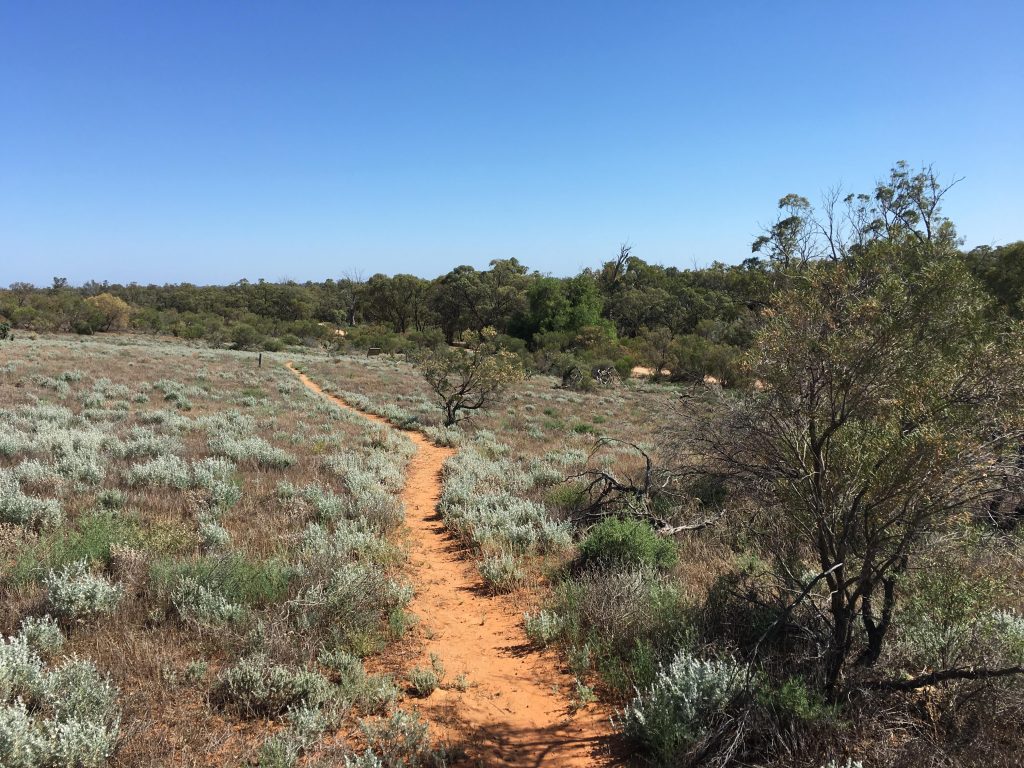 Wander along this 2km circuit trail to explore how the first Europeans lived and worked the land here. See the historic remains of the homes of the Craigies and the Blands and visit the grave of Margaret Craigie. From the lookout gaze out over the land that once sustained these families.

Other Great Walking Trails in the Riverland

Nearby there’s more of the Riverland and Murray River to experience on foot, and we’ve included some of the best ones below. 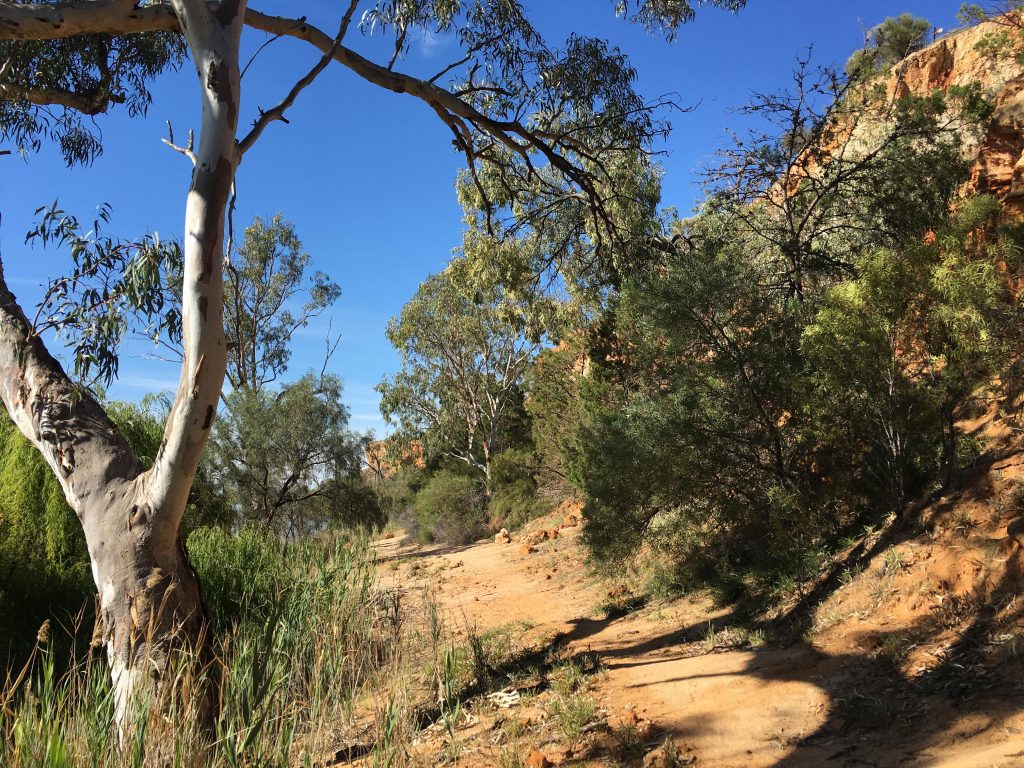 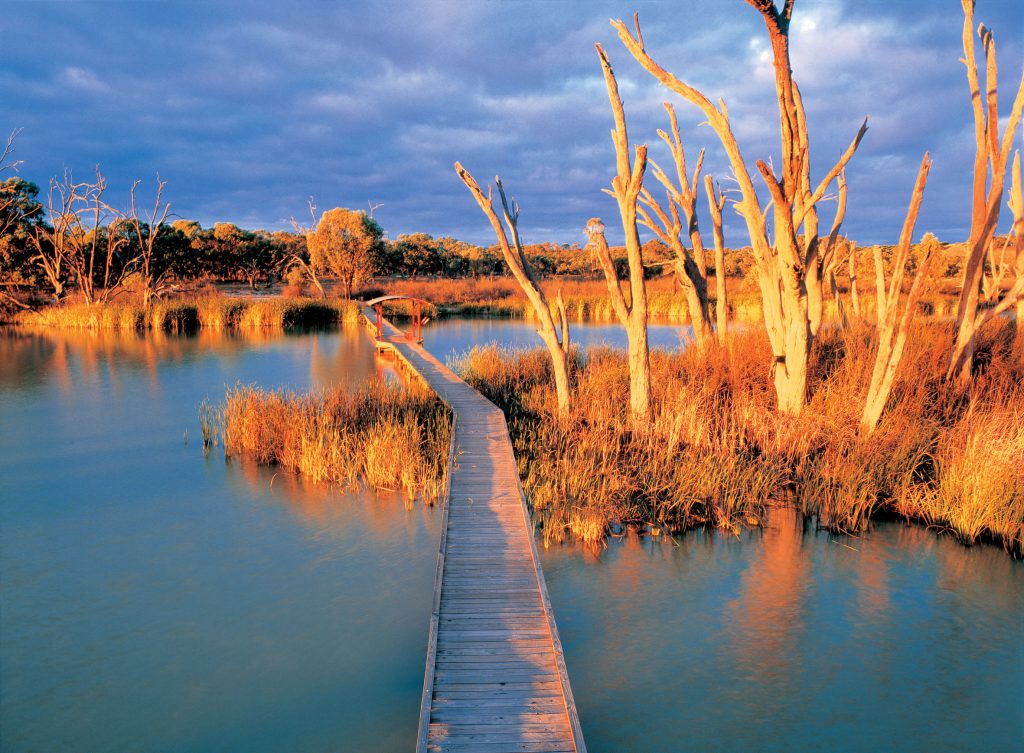 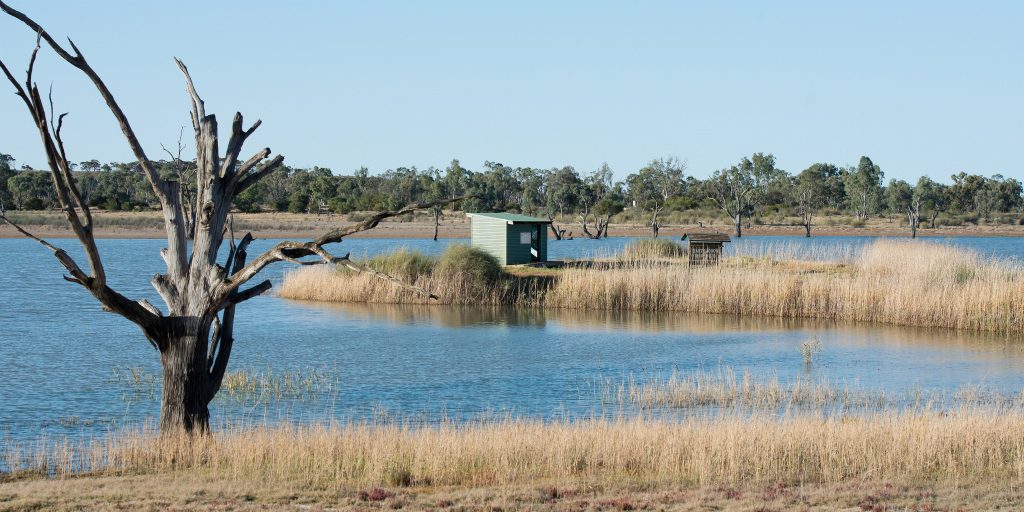 Hart Lagoon is situated close to the Waikerie township and riverfront. The walking track starts adjacent to the Waikerie Caravan Park and is a loop of 5km. It follows the edge of the lagoon to Ricciuto Road and returns between the river and the lagoon. 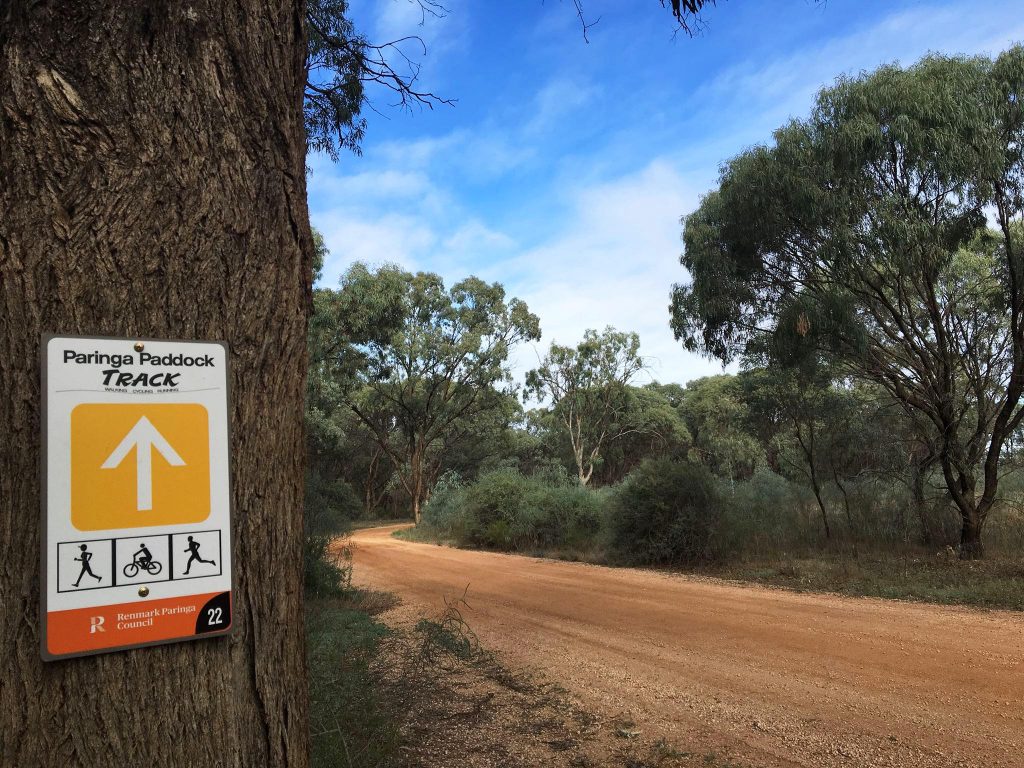 Paringa Paddocks has been used by locals for many years and has various tracks throughout. In May 2017 Renmark Paringa Council upgraded the trail network. The Trail consists of 2 main loops (marked in yellow) and 4 alternative routes (marked in blue). The trails are suitable for walking and mountain bikes. 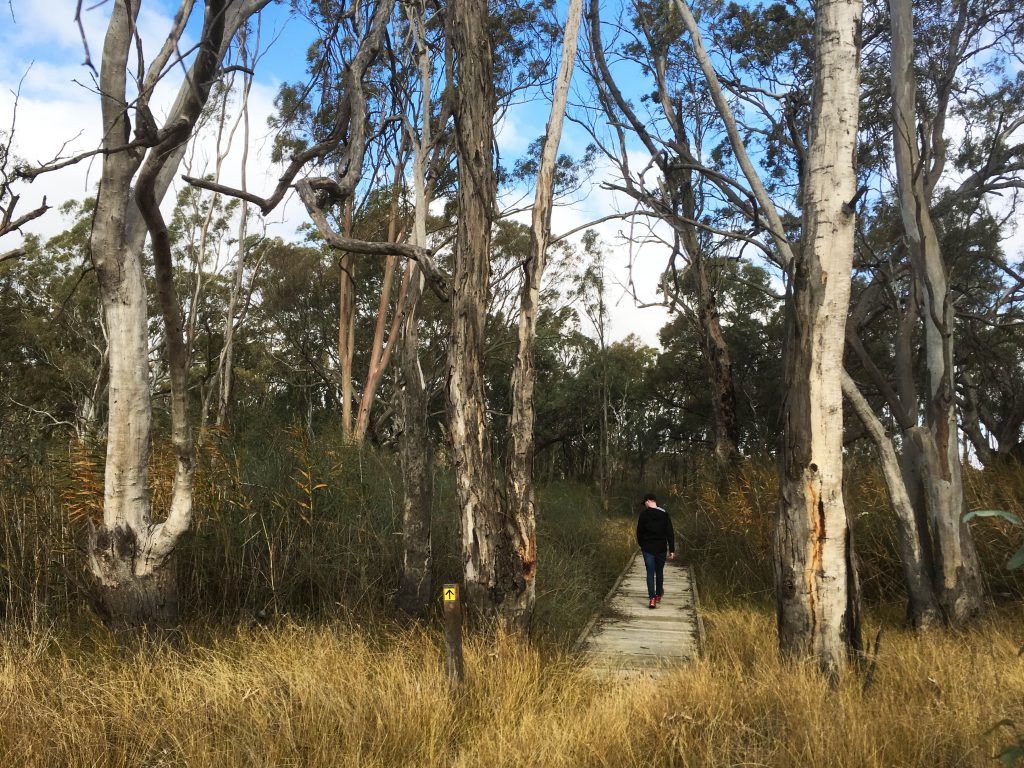 Meander through the wetlands and creeks beside the Murray River. The wetland flora and fauna are highlights of this trail, especially the majestic River Red Gums and abundant birdlife. 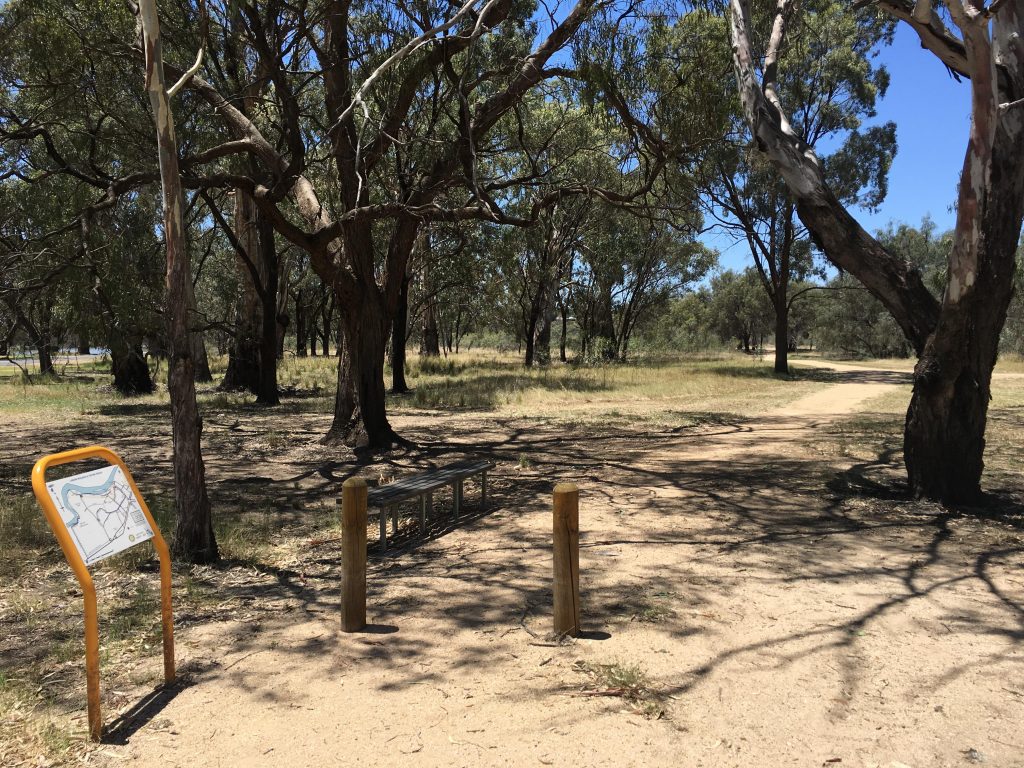 Wander along the riverfront westwards to Heaven (steep climb to lookout). The walking and nature trails meander through the natural riverine environment rich in history and geology, many of the gum trees are hundreds of years old. 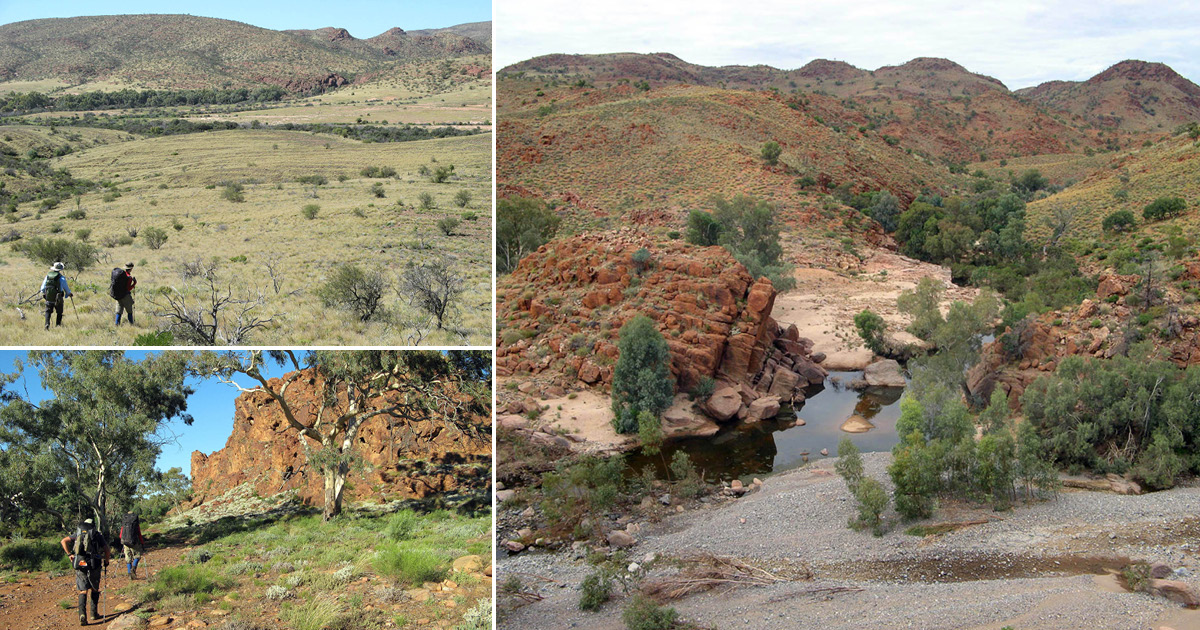 What is the issue?

The State Government is seeking input in order to review the Pastoral Act.

Much of the land in the Flinders Ranges north of Hawker is not private freehold land but instead is leased from the State Government to pastoralists to undertake grazing ventures1, and recognises the rights of Aboriginal people.

As the land is leased, people can undertake recreational off-trail bushwalking in these remote locations. They must notify the lessee of their intentions to walk, and the lessee can only deny access in certain scenarios. To clarify, by “off-trail bushwalking” we often mean following old vehicle tracks, or walking in a low impact environment, and can include camping for a few nights.

The Act also provides what are called Public Access Routes (PARs), which are often used by 4WDers for recreational use. They are well established and will likely probably remain, but our concerns are for access to other lands not part of PARs.

How could changes to Pastoral Act impact on recreational bushwalking? What are our concerns?

Currently, people intending to undertake bushwalks must notify the lessee of their intentions to walk, and the lessee can only deny access in certain scenarios. If support vehicles are to be used (or if the activity is recreational 4WDing), consent must be gained from the lessee.

Whilst we acknowledge that the Pastoral Act needs updating to allow for more flexible uses, including tourism and energy production, as well as the current need for cultural sensitivities, or mining activities, we’re concerned that access for recreational bushwalking may become restricted in these lands outside those limited, defined areas.

As tourism ventures are being considered to be included in the Act, this could further restrict access for recreational bushwalkers. We acknowledge that in some circumstances tourism ventures may be predicated on offering an exclusive access to experience the land, but would urge the Government to consider how this could adversely affect access for recreational bushwalking if it was widely implemented.

Who does this impact (in the context of undertaking recreational bushwalking)?

END_OF_DOCUMENT_TOKEN_TO_BE_REPLACED

We’re seeking someone to fulfill the role of Treasurer, due to a vacancy on our Board.

The position may be suitable for someone:

The position is supported by our Executive Officer. The Board of Walking SA was formed in August 2013 and consists of 12 members with a variety of skills.

Please direct any questions about the role or interest to our Executive Director Helen Donovan on 0457 006 620 or office@walkingsa.org.au. 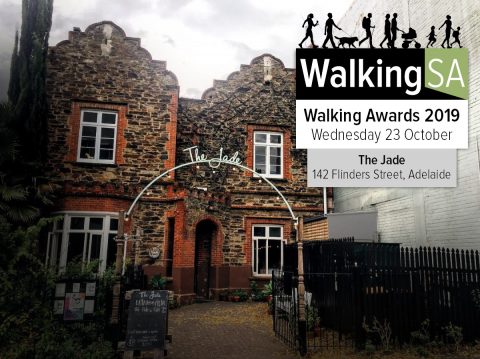 The annual Walking SA Walking Awards are to recognise sustained and outstanding contribution to walking at all levels throughout SA. Many volunteers and others have contributed to South Australia’s great walking trails, walking clubs, and walking promotion and opportunities for health, wellbeing, recreation and tourism.

Please join us to present and celebrate our outstanding community members at The Jade in Flinders St Adelaide. 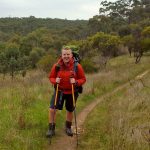 Our guest speaker will be Ben Trewren. Ben was awarded the 2018 Terry Lavender Churchill Fellowship to explore opportunities for trail destinations to attract and grow world class ‘shared-use’ interests. Having recently returned from his exploratory trip overseas, he is moving on to writing his investigation report. Ben will present a report about what he discovered about how trail destinations attract and grow world class ‘shared-use’ interests.

If you know of someone who should be considered for an award there’s still time to nominate. Get your nomination in by Friday 27 September 2019.

Bar will be open for purchase of drinks, light refreshments provided.

The Walking SA Annual General Meeting will be held before the Awards presentation, from 6:30pm to 7:00pm.

If you wish to nominate for the Board you are strongly encouraged to do so. Please refer to the Nomination Form ( Microsoft Word, or PDF.)

There is free on-street carparking after 6pm and nearby multi-story parking areas. The Jade is 6-10 mins walk from the closest tram stop. 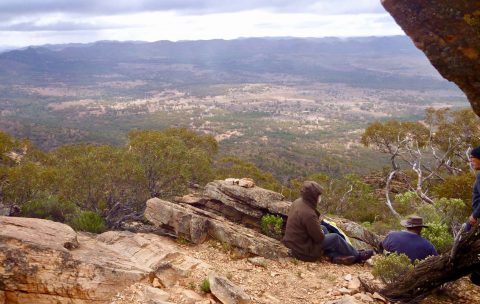 This article originally appeared in the Friends of the Heysen Trail Spring 2019 Trailwalker magazine, and is reproduced here with permission.

In May 2012, I gloriously climbed the stile in Parachilna Gorge to complete the 1200kms of the Heysen Trail independently over 22 years. My companions and I looked at each other and said, ‘We shouldn’t stop here. Look what’s over the road!’

In the 1960s, Warren Bonython walked all the way to Mount Hopeless 2, the unofficial northern extent of the Flinders Ranges. We should do the same! 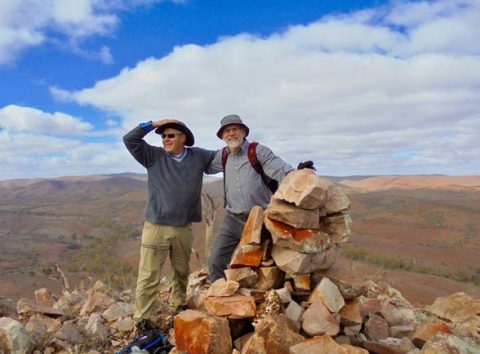 Plenty of groups have done it, we thought, as we eyed the remote and mysterious country beyond. Such expeditions are not for the inexperienced, unskilled or faint-hearted. We did not fit any of these categories, but we were getting on a bit. We were past carrying 20kg packs on our backs. So this story is an attempt at a solution for everyone, including our valued senior citizens.

Spreading the maps over the table revealed a possibility that, unfortunately, did not include the spectacular interior of the Gammon Ranges. We were thinking of bases in the sheep station country between Parachilna, the Gammons and Arkaroola. From there with the aid of 4WDs we could do the route in bits and pieces: day walks and one or two overnighters. We thought Freeling Heights difficult but unavoidable. You wouldn’t want to leave it out anyway.

As luck would have it there was an immediate spark of interest from my brother Andrew – a serious four-wheel driver and not so serious walker – offering transport and support for Robert Koehne, John Fuller and myself.

The base for an initial trip was Blinman Hut, the initiative of Keith and Lisa Slade of Moolooloo Station, built and fitted out for nomads like us. All country in this region is privately leased. Developing respect and good relationships is fairly straightforward but essential. If you wish to deviate from the publicly-accessible roads in the area you need permission from the landholders.

Setting off in June 2018, we quickly discovered driving to Moolooloo, chatting with Keith, and on to Blinman Hut, that it would take us longer than expected for drop-offs and pick-ups. Certainly our plan to get to Arkaroola this time round might have to be modified.

Blinman Hut was the perfect stay. Bore and rain water were on tap, the wood-fired stove warmed us in the evenings, and we had warm showers when we stoked up the elevated boiler outside. Andrew’s 4WD provided refrigerated storage and lighting inside the hut. We also were equipped with spacious tents for sleeping. 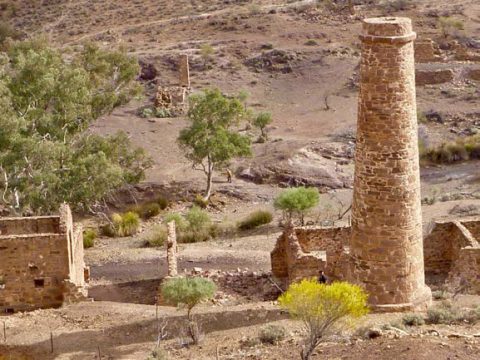 The promising but failed Nuccaleena Mine

A few planned warm-up excursions proved to be engaging and sobering. The promising but failed Nuccaleena Mine must have been exciting in its short life span. A lot of investment money was lost when it prematurely ran out of ore.

We searched without success for the Aboriginal rock art on Tam O’Shanter Hill, but got a great view from the top. We secured permission from the owner of Narrina Station to climb Patawarta and visit the historic Artimore sheep station. Like many features in the northern Flinders Ranges, Patawarta Hill is inappropriately and tritely named. (Bonython spends some time in his book on this point, citing examples like Dick’s Knob.) Patawarta Hill should be Patawarta Mountain! From the north it was not a difficult climb; a most rewarding walk and the best of panoramic views from the top.

The main business of our visit – following the Oratunga, Molkegna and Narrina creek lines, with some vehicular track on the connecting flats – was no less rewarding. It was the most pleasant ‘get-away-from-it-all’ country anyone could imagine. 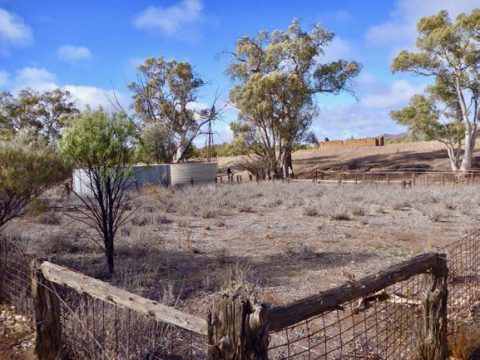 We made it from the Trailhead at Parachilna Gorge to Narrina Homestead in four ‘day walks’. But by then we were spending so much time in drop-offs and pick-ups that we knew if we went any further we would have no time for walking.

Next time we will possibly have bases at Grindell’s Hut and Arkaroola, pushing on to the closest vehicular access below Freeling Heights. After that we would make our own base camps. The valley after Freeling sounds, from Bonython’s book, inviting and well worth aiming for on the way to Mount Hopeless.

I have an 18-day plan in spread-sheet format and a set of maps of a route from Parachilna Gorge to Mount Hopeless that I would be willing to share. Contact me via email on jamclean57@icloud.com if you are interested.