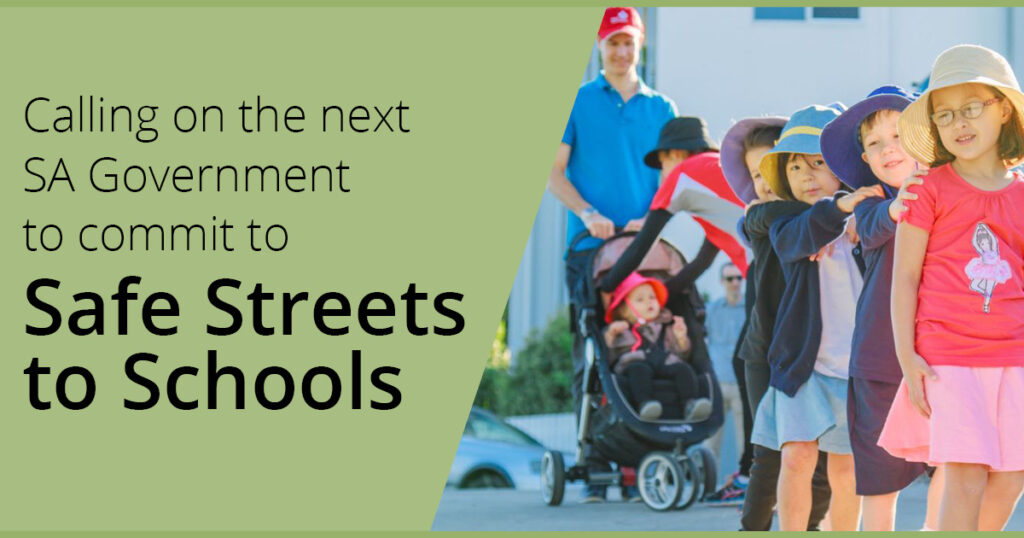 Walking SA has today written to all candidates in the upcoming election with a call to invest in our children and ensure we have Safe Streets to Schools.

All children should feel safe to walk and cycle to school, without risking being injured by vehicles.

It is completely unacceptable to have poor walking conditions, that do not consider children’s needs or incorporate design based on children’s abilities, within a 2km catchment of our primary schools.

Parents have no faith in the urban environment to keep their children safe, so they drive them to school, adding more cars to the roads and increasing school traffic.

The Government must make a commitment to active school travel and prioritise children’s health and wellbeing by enabling children to walk and cycle to school.

“Over the past 40 years, children walking and cycling to school has declined from 75 percent to 25 percent,” Dr Helen Donovan, Executive Director Walking SA said. “As physical activity levels decrease, not only do children experience a myriad of problems associated with loss of physical health, but we have also seen levels of anxiety and depression in young people skyrocket. Are we going to accept this as a community?”

In South Australia on average 52 percent of school children live within two kilometres of their school, but only 20 percent actively travel to or from school.

“Walking and cycling to school isn’t just a matter of individual motivation. We need to steadily improve the built environment to ensure it is safe and enjoyable to walk and ride. Children and families must have a viable, safe choice.” said Dr Donovan.

“We commend the government on their genuine, collaborative efforts to develop a state-wide Walking Strategy. Now we need to see some commitment and investment into walking to see this Strategy come to life.”

Walking SA calls on the government to take immediate action:

Walking SA will be calling on our members, supporters and followers to support our call at the next election and vote with their feet for the party who supports more walking more often.

Our vision is to see more people walking more often.

Our members include walking clubs, informal groups, individuals and organisations whose aims, and objectives align with those of Walking SA.

Our Strategy guides us to achieve more walking for recreation, transport, and health as we:

To find out about Walking SA, including our database describing over 750 trails in South Australia, visit walkingsa.org.au

Elise Kennewell from WEA Ramblers and Elaine and Andrew Davies from ARPA Bushwalkers have recently graduated as Day Walk Leaders through our program to strengthen bushwalking leadership within our clubs. The program was possible through grant support from Office for Recreation, Sport and Racing, with Walking SA partnering with Bushwalking Leadership SA. 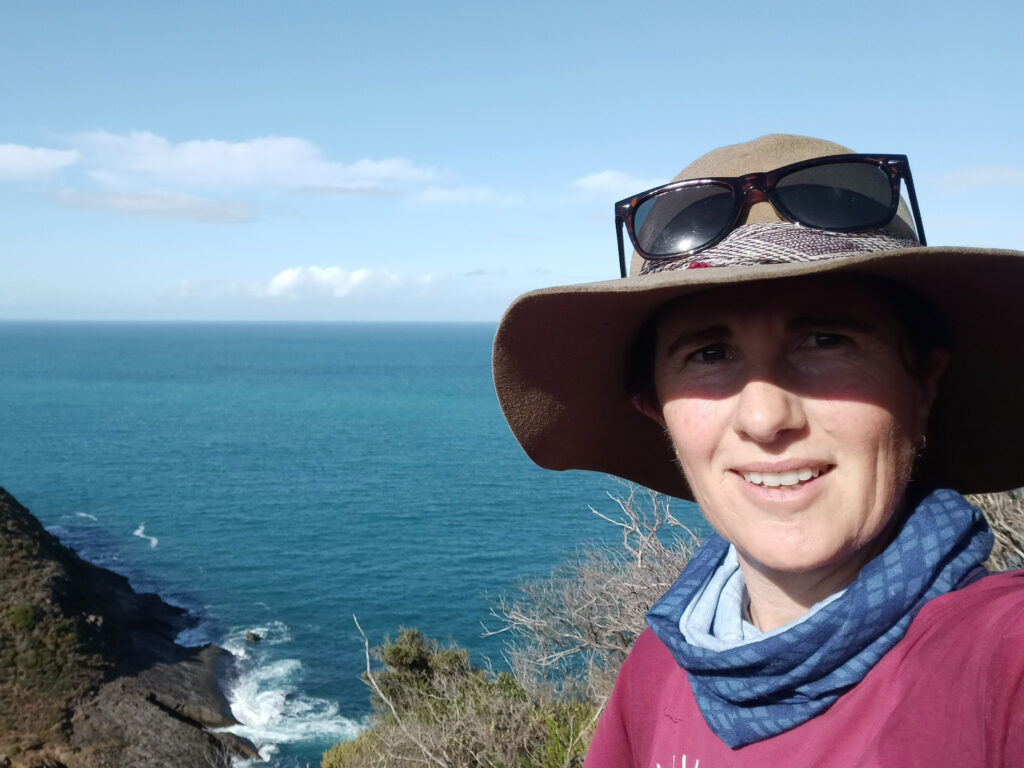 Elise signed up and commenced the Day walk Leadership Certificate course in October last year. At the time she was not connected to a bushwalking group, she wanted to complete the training for personal, and potentially future employment reasons.

Following the completion of the theory component, she was required to log a number of walks and then undergo assessment practically by planning and leading a walk with a number of participants.

To assist her to get walking, and complete a number of walks and trails around Adelaide, she chose to join the WEA Ramblers group. She had found all their contact details and a walk program with dates and walks on the Walking SA website. She was very warmly welcomed by this group, and she joined them on a number of walks as a guest and then later as a member.

This group were very supportive of her training, and were keen to provide support with her assessed walk by attending and encouraging her in the lead up and on the day.

“I really feel that being a part of this walking group has consolidated and enhanced all that I learnt in the theory of the course. I have learnt a lot more about bushwalking, planning, group dynamics and leadership styles by observing, participating and walking with the group, which contains many very experienced bushwalkers. I have also been able to use my skills in navigating and first aid in real life situations as a part of our regular walks, which has given me practice and confidence.”

“I want to thank this group for all their support and now friendship, and I look forward to many more walks together as I continue to walk with them exploring the many beautiful natural areas in South Australia.” 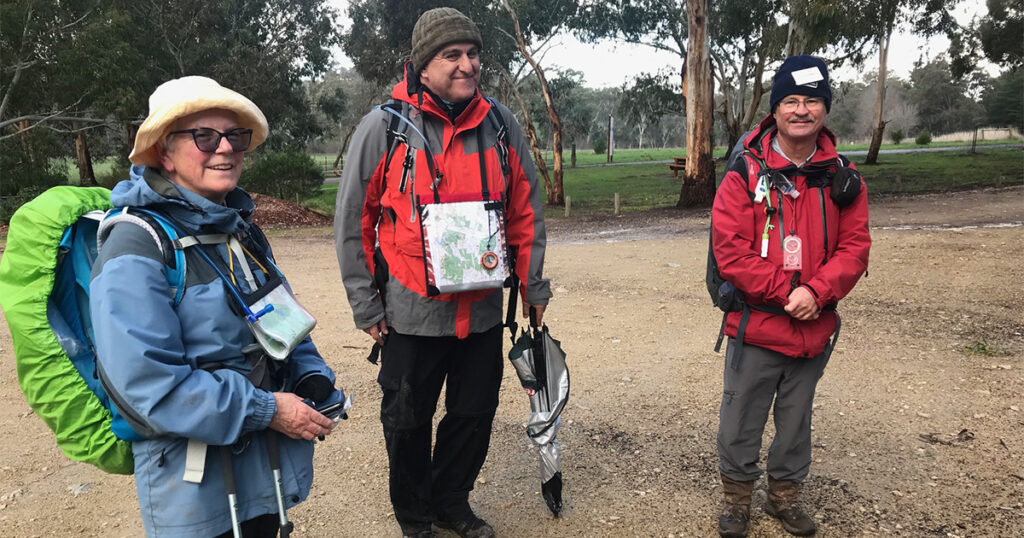 Andrew and Elaine Davies were sponsored by ARPA Bushwalkers to participate in the Bushwalking Leadership SA Day Walk Leader Program. They have been members and active participants of ARPA since 2016 when they retired.

Starting by participating in day walks, they have subsequently led (between them) walks in all areas around Adelaide. They’ve led ARPA graded A-grade, B-grade and C-grade walks (ARPA walks are graded from A-grade – the longest and hardest walks, to D-grade – the  easiest shortest walks). They’ve been involved in long distance walks on Kangaroo Island and Victoria’s a

They have also done long distance walks including the Kangaroo Island Wilderness Trail and the Great North Walk from Sydney to Newcastle. They have convened trips including the alpine High Country in Victoria and New South Wales. In January they’re hoping to complete the “Alpine Trifecta” in Mt Buller.

They are appreciating their additional skills to pursue their passion for delivering the best day walk possible.

You can find out more about upcoming training dates by contacting us or visiting bushwalkingleadership.org.au.

On 28 October, we hosted a panel discussion on trails – trail building, trail maintenance, current and emerging trail projects, and how the walking community can help.

The panel discussion included projects underway or being planned, which we’ve outlined below.

Approximately $130m is being invested across the state as part of the Parks 2025 initiative, a strategy that aims to conserve our natural landscapes and wildlife, activate nature-based tourism, boost the state economy and strengthen local communities.

An upgrade to the Playford Lake – Wood Duck Walk trail. The project will upgrade the trail to meet class 1 accessibility standards.

An upgrade of the Cape Willoughby visitor precinct will help to transform the tourism experience at the eastern end of Kangaroo Island.

The state’s oldest lighthouse is set to host the island’s newest tourism destination following the announcement of a $5 million project aimed at supporting and rejuvenating the visitor economy.

Jointly funded by the federal and state governments, the redesign and rollout of the Cape Willoughby visitor precinct has been made possible thanks to the purchase of an additional eight hectares of former private land.

The federal government will be providing $4m and the state government $1m towards the project.

The new viewing platform will be set above a 10-metre chasm in the cliffs where waves break over the rocks below and provide visitors with stunning coastal views.

Part of the funding would be also be used to kick start a process to deliver a multi-day trail from Penneshaw to Cape Willoughby, which would be done in partnership with the Tourism Industry Council.

The Wild South Coast Way is a project to upgrade 80km of the iconic Heysen Trail and connect the parks that run along the breathtaking southern coastline of the Fleurieu Peninsula.

Upgrades to the Mount Lofty Botanic Garden will include resurfacing of key trail and the establishment of a new wayfinding strategy to develop a series of promoted walking loops throughout the garden.

Construction on the trail network within Glenthorne National Park is now commencing.

This will expand the current single 4.4km loop trail.

In additional to the Parks 2025 investment, National Parks and Wildlife Service have been progressing rebuilding of park facilities on Kangaroo Islands.

Forestry SA will soon be opening two new 7km multi-use trail loops in Second Valley Forest. This is exciting because Second Valley Forest has never been opened for general public access before. The District Council of Yankalilla are installing a new carpark on the corner of Range Road and Bedlam Flat Road near new step-overs into the forest to access the trails. The trails follow fire breaks and tracks and meander between pine plantations and patches of native vegetation, providing beautiful views across towards Rapid Bay. An announcement will come soon on the official opening.

We are working with SA Water and National Parks staff to effectively manage new walking trails which have recently been installed across all three land tenures in the South Para Reservoir area. This includes the Cattleyard Track – Para Wirra Link, Warren Tower Link and East Warren Reservoir Loop.

The multi-use Onkeeta Trail has been officially finished in Kuitpo Forest with trail head map plates installed next to a new step over and revamped carpark. This trail is currently closed due to harvesting operations but will reopen again very soon.

A section of the Willunga Basin Trail has been completed through the Mount Panorama area of Kuitpo Forest.

I’m currently working with the Friends of Heysen Trail to renovate Rossiter’s Hut in the southern Barossa’s Pewsey Vale block (Mount Crawford Forest). We’ll be working closely with volunteers to get in a contractor to complete works on the hut before the 2022 season walking season opens.

SARTI has completed the 300km Lavender Cycling Trail – a variant of the walker’s Lavender Federation Trail designed for cyclists. A grant request has been submitted to mark trail.

They also undertook the project works to build two trails for the Clare and Gilbert Valley Council. The council has recently packaged six short walks to form the Clare Valley Short Walks, with two new trails marked by SARTI:

They were also involved in the Clare Valley Wine & Wilderness Trail. The trail showcases Clare Valley’s natural beauty & premium food and wine products. It will be a 100km loop of hiking and cycling trails. The trail will travel on a network of backroads, road reserves & private property. Sections 1 was opened in April 2021, and section 2 on 3 October. The last four sections will be completed by April 2022.

They have been helping a fledgling concept project to develop a trail around Kangaroo Island.

A short loop trail off the Lavender Federation Trail at Eden Valley has been developed.

They’ve been involved in interest in developing the Eudunda to Morgan disused rail corridor as a trail to link the Lavender Federation Trail and Lavender Cycling Trail at Eudunda to the Murray-Coorong Trail at Morgan. 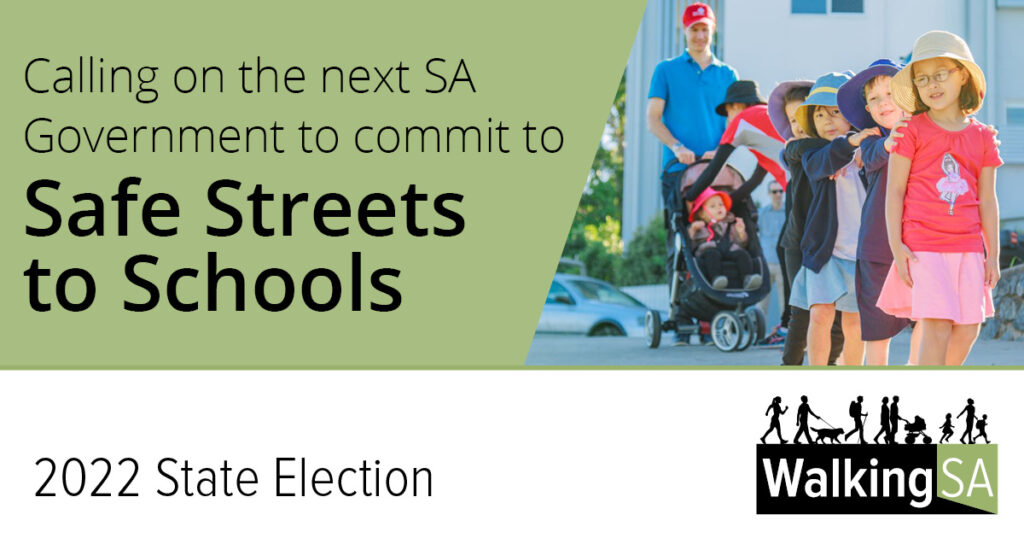 Walking SA is calling on the next South Australian Government to invest in Safe Streets to Schools.