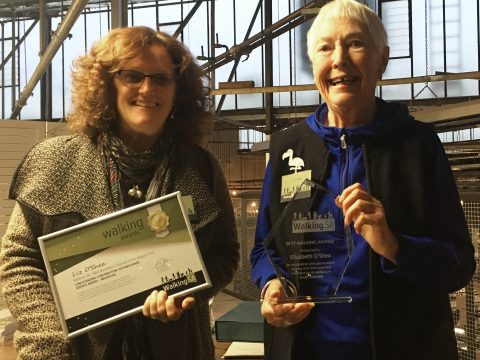 In its second year, last night’s annual awards at Plant 4 Bowden recognised sustained and outstanding contribution to walking at all levels throughout South Australia.

Awards were presented to 19 organisations and individuals, celebrating their contribution to walking in SA.

If you know of someone who should be considered for 2018’s awards please do consider nominating them, we’re accepting nominations throughout the year.

DEWNR has enhanced the development of walking in South Australia with the vision and implementation of this significant walking trail. …

The City of Salisbury has developed and delivered the Green Trails Masterplan to deliver cross-city (and beyond) trails including the Little Para River Linear Trail and Dry Creek Trails. In late 2016 the City of Salisbury opened the Lowie’s Loop Nature Play Trail at the Boardwalk at Greentree …

The City of Charles Sturt is demonstrating an ongoing commitment to improving walking infrastructure in the delivery of the Grange Lakes Shared Use Path. The strategic vision for this Accessible path is to create links between recreational and historic sites, public transport and other walking …

The District Council of Elliston has completed the Elliston Coastal Trail, a series of connected trail loops on the shores of spectacular Waterloo Bay between some of the most dramatic coastline on the Eyre Peninsula. With gentle well formed compact tracks over much of the four trail options, …

The District Council of Robe has formalized and consolidated the many informal walking trails through the coastal dunes and cliff tops around the Robe township into one trail. By surfacing the trail and controlling the access through the coastal areas the safety of trail users and enviromental …

South Australian Recreation Trails have brought to life the vision of walking in the hills to the east of the Mt Lofty Ranges. The dedicated group of volunteers have engaged with local councils, landowners, community groups and local businesses to plan and implement the trail over a series of …

Chris has made significant and ongoing contributions over the past 13 years to South Australian Recreation Trails Inc who have been developing and implementing the Lavendar Federation Trail. With his past work with ARPA Bushwalkers and Walking SA he is recognised for this Special Recognition Award. …

David first joined the Friends of the Heysen Trail in 1996, serving on their Council and volunteering at their office. In 2000 he was instrumental in the vision of providing a program for people to walk the entire 1,200km Heysen Trail in a series of supported day and weekend walks. The first …

In 1995 Denise started the Gawler Bushwalking Club, leading walks and serving on the Committee in various roles. Now 22 years old, that vision has lead to a group of up to 25 local walkers participating on the fortnight hikes. …

Gordon has spent many years volunteering and contributing to the management and ongoing operations of Bushwalking Leadership South Australia. The program has been training bushwalking leaders in South Australia since 1973, setting the training standards to a high level with a proud safety …

Carlien was a founding member of ARPA Bushwalkers, and has gone on to inspire and assisted countless walkers with training programmes and suggestions for walks. …

Des lead the first group of ARPA Bushwalkers to walk the length of the iconic 1,200km Heysen Trail. He has made valuable contributions to ARPA Bushwalkers by instigating summer camps in the Victorian and NSW High Country, organising the Heysen 2000 – where the whole Heysen Trail was walked in …

Joan has made valuable contributions to ARPA Bushwalkers by serving on the
Committee, representing ARPA on the Walking Federation Board (now Walking SA), leading a Heysen 4 group, leading many day walks at all levels and assisting on a number of walking camps. …

Jeremy has been a long standing member of the Friends of the Heysen Trail as well as Walking SA and has contributed widely to active promotion of walking in nature. Most specifically his website skills in developing sites for each of the Friends and Walking SA has ensured that the walking …

Liz joined the WEA Ramblers Bushwalking Club in 1979, and has since completed over 500 club hikes, and lead over 60 of these. She has served on their Committee, as well as the with the Friends of the Heysen Trail. She made a significant contribution to Walking SA by serving on our committees …

Although a relatively latecomer to organised walking, after retiring from the SA Police Ron devoted his considerable energy and creativity to the promotion and facilitation of better walking for all. For several years he was a very active committee member and in 2011 as the President of Walking …

John has saved many a potential walking route from being lost from public hands. He has spent many years working with Thelma Anderson on the Walking SA Trails Access Committee manually checking Government Gazettes to find and review potential road reserve closures that would impact on walking …