There is a project update published in July 2016. 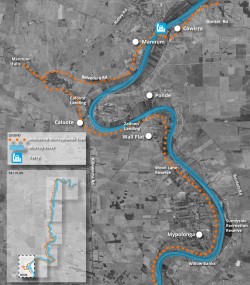 A walking and riding trail along the River Murray is being considered by three councils – Rural City of Murray Bridge, the Mid Murray Council and the Coorong District Council.

A feasibility study is underway and input is being sought. The trail could begin in Salt Creek on the Coroong, following the Coorong to the Murray Mouth, then following the meandering River Murray to Morgan via Tailem Bend, Murray Bridge and Mannum. The trail will provide links to a number of iconic and historic river towns, major tourism attractions and other existing trail networks along its route.

You can review the high level alignment maps: