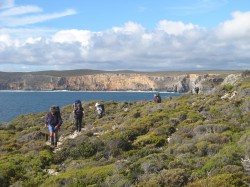 The project was announced during the Budget earlier this year.

“We expect the Kangaroo Island Wilderness Trail will bring up to another 5000 visitors to Kangaroo Island every year, adding to the 190 000 people who already make the trip,” he said.

The government hopes the trail will rival other popular walks such as New Zealand’s Milford Track and the Overland Track in Tasmania.