Tragedy in the North 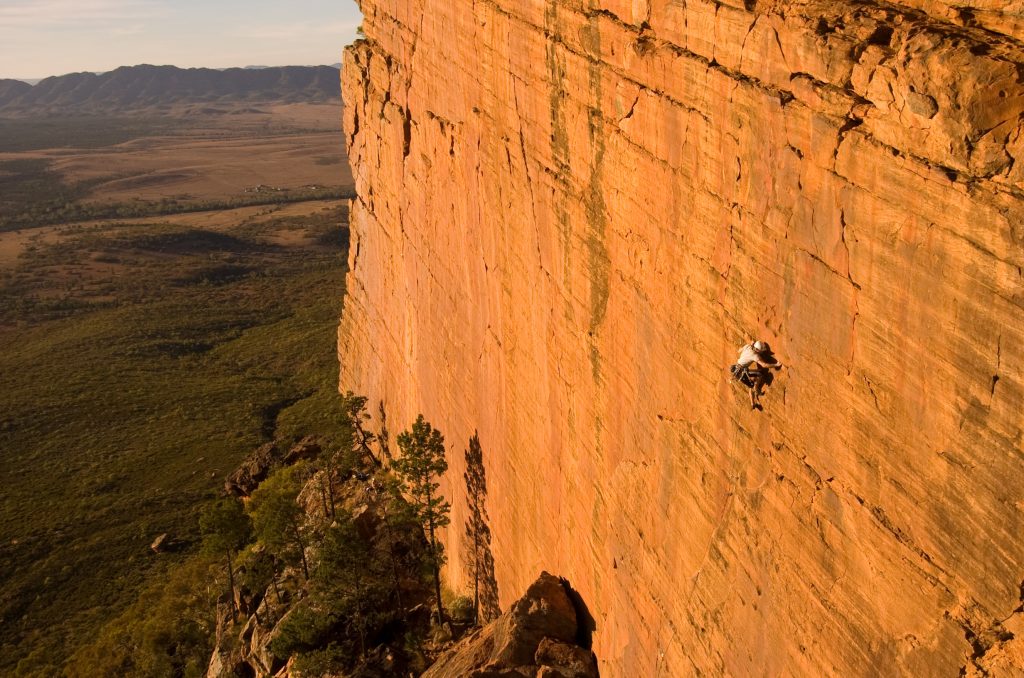 The news that two climbers had died at Moonarie Gap, on the escarpments of Wilpena Pound, came out of nowhere. Immediate thoughts were with the families and friends of the two young men. We learnt that the cliff at Moonarie is a renowned climbing destination so thoughts included the local and international climbing communities. But the effect on the traditional custodians of the land was a wake-up call for the climbing and the walking communities alike.

The reaction of the Adnyamathanha, the indigenous nation of the northern Flinders Ranges, was unexpected. It was immediately evident that an impact on climbing and walking in, around and beyond the Wilpena Pound was a distinct possibility. I am a back-packing walker of the northern Flinders Ranges going back to the 1960s and a Heysen Trail end-to-ender but this was new to me. What should I think? What should we think? How should we react, if at all? 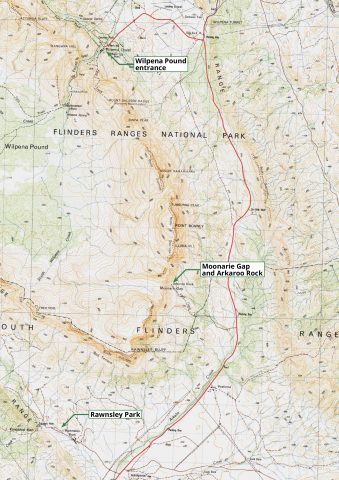 Map of where Moonarie Gap is on Wilpena Pound

I wrestled considerably with my thoughts, and the thoughts of others, until I came to three words: Respect, Listen, Learn. This story is about the follow-up of users of this wonderful country, in recent times and over thousands of years.

Their Country Our Privilege

We take of lot of things for granted in our largely egocentric lives. Representatives of South Australian climbers and walkers received a clear message when they met representatives of the Adnyamathanha at Oraparinna.

A five-person delegation travelled to the Northern Flinders to present to the Co-Management Board of the Ikara-Flinders Ranges National Park. The two climbers and three bushwalkers had deep concern at the reported reaction of the traditional owners to the sad deaths of the two climbers who fell while attempting to scale the cliff face at Moonarie.

Enjoying a clear blue sky and familiar array of colours of earth and vegetation we apprehensively arrived one by one. Attendees greeted us individually and very warmly. The Board listened respectfully as we presented slides of our organisations, our members, extent of activity, and precautions of safety and care. We had finished. Then as Terrence Coulthard, Management Board Member, spoke the other indigenous representatives nodded in approval.

The Board was nearing the end of its two-day quarterly meeting. In attendance were officers of the Department for Environment and Water (DEW), traditional owners, and indigenous DEW Rangers. By now we were on a first name basis with all.

Terrence spoke firmly but not overbearingly. He explained that the tragic loss had affected all of the Adnyamathanha people. Any loss on their country is sad and taken personally. John Marshall Climbing Club of South Australia, had informed us that Moonarie was very popular. It attracted international climbers. But Terrence continued to explain that the first option, as was quoted in the media at the time of the accident, was to close Moonarie altogether. “Think for a moment,” he continued, “how those of us with Christian belief might feel if people were climbing all over our cathedrals.”

There was quick discussion of times, scrambling for diaries, and a date was agreed. It’s a long way to the Northern Flinders from Adelaide, but I for one was keen to attend.

Terrence turned for a moment to bushwalking. “We’re walkers. We’re with you. The Adelaide Bushwalkers has been walking here since 1947. We have been walking here thousands of years.” Terrence has a pastoral lease, Iga Warta, near Mount Searle. He invites people to walk his property and the lands between Lake Torrens and Lake Frome. He will conduct guided tours and a shuffle service if required.

On the matter of sacred places significant sites or aboriginal rock art, Terrence was asked if we should be careful about anything when wandering through. He was quick to reply that we should take care everywhere. It is all sacred. The land is as important to us as the Bible is to Christians.

Later Beverly Paterson told me a poignant story. She said don’t take stones. A long while ago a school group took a large stone and put it on display in the classroom. Thirty five years on when some of us knew better the stone was returned. The Adnyamathanha were able to locate exactly where it had come from, and restore it in its rightful spot, thus restoring their loss. Beverly and I looked at each other and recited the bushwalkers’ motto in unison – “Take nothing but photos. Leave nothing but footprints.”

For me it’s respect and appreciation. It’s their country and our privilege.

Note: The delegation consisted of two climbers and three walkers – two from the Climbing Club of South Australia, two from Walking SA and one from the Adelaide Bushwalkers. The Board consisted of four officers from the Department for Environment and Water (DEW), four Traditional Owners and four National Park Rangers. Arrangements were managed by DEW. 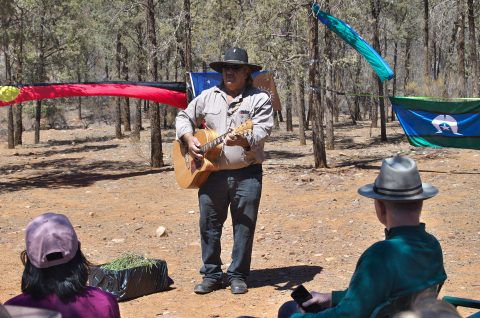 Terrence and the Adnyamathanha Song 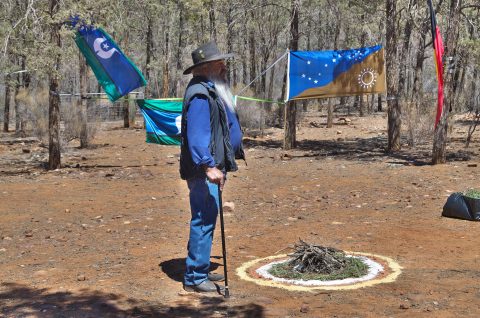 Vince and Terrence conducted the Ceremony 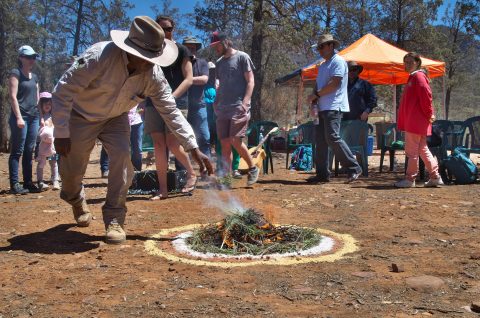 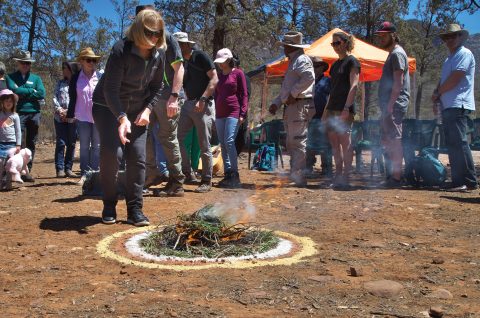 Fifty people gathered near Moonarie Gap to remember the recent sad deaths of the two climbers who fell from the Moonarie cliff face. The ceremony, conducted by Vince Coulthard and Terrence Coulthard of the Adnyamathanha (Rock-People), was deeply spiritual and touching.

We were welcomed in Adnyamathanha and English, and moved with a sharing of experience and culture. The phrase that “we were all one” was used a number of times. Traditional owners are deeply affected by tragedy that occurs on their lands. The ceremony was a chance for us all to share our grief. The Adnyamathanha are sad that people climbing their rock are no longer with us but understand that we like them respect the rock country and that two people left us doing what they loved in a location that they loved.

We were treated to an exposé of flags: the Aboriginal, the Torres Straight Islander, Australian and the Adnyamathanha. The two Adnyamathanha peoples, the Blue Rock people and the Brown Rock people, are represented by the blue and brown backgrounds. The devouring, by the evil serpent, of seven beautiful sisters brought a great flooding of tears that gave rise to creation, the male and the female represented on the flag by the respective white star formations. The country gives rise to life and we respectfully acknowledge the spirituality of country and life.

The ceremony concluded with the ignition of the smoking fire enclosed by the culturally representative circles of yellow, brown/red and white, and the filing past of attendees each of whom, with emotion and respect, added a leafy twig to fuel the fire. (Note: refer to “Significance of the Healing Ceremony fire” at end of story.)

Words of acknowledgement and thanks to the Adnyamathanha came from Parks Management (DEW), and the climbing and walking communities. New friends were made, cultural boundaries were broached, and ethereal understandings reached.

Significance of the Healing Ceremony fire

Our Adnyamathanha people feel that we are responsible for the people that visit our country. It is very important that we do our best in providing a positive experience for our visitors, which is why we like people to participate in the “Welcome to Country”.

The fire was our way to communicate with the spirits of our ancestors and to ask them to take care of our Adnya (Rock) loving brothers. We Adnyamathanha (Rock People) share equal passion and love for the Rocks.

The fire was circled by an important sacred ceremonial plant which is used in burial ceremony. The smoke from the Vartiwaka plant is our way of networking with the spirits.

The white ochre is used to both connect with the spirits of our ancestors and with the two men that were taken from us whilst doing what they loved.

The brown/red ochre is for them to connect with Mother Earth.

The yellow ochre asks Mother Earth for a new beginning for everyone concerned.