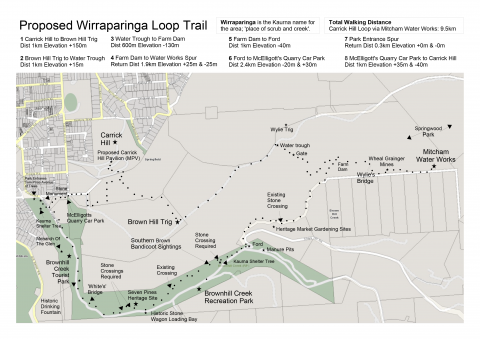 An essentially no-through stick-to-the-road creek walk is being expanded as a recreational and heritage trail. Ron Bellchambers of the Brownhill Creek Association, as a walker, a retired history teacher and a neighbour of a local landowner of Springwood park, had a vision. Ron was aware of the potential of the extensive Springwood Park for its indigenous and historical heritage and for linking walking routes with Brownhill Creek, the Yurebilla Trail and Carrick Hill. The land owner was conducive to making strategic parts of his property publicly accessible.

Ron, being aware of Walking SA’s work on the Adelaide100, asked if we would like to take part, along with, as time ensued, the Mitcham Council, Carrick Hill, DEWNR, the Government of SA, the SA Tourism Commission, and the Commonwealth Government. As Jim McLean reconnoitered the area, and mapped potential routes and points of historical significance like the “early settlers” Mitcham water works. They presented options to a meeting, hosted by the landowner, which was attended by representatives of a broad range of interested parties.

Since then we have met with local State member Martin Hamilton-Smith, the Director of Carrick Hill, and the Chief Executive of the SA Tourism Commission. All parties enthusiastically support the Wirraparinga Trails Project. Ron has made contact with local Federal member Nicole Flint and is confident of applications for support at Federal, State and Local Government level being successful. Walking SA is making a valuable contribution to this worthwhile project. Its involvement in the Wirraparinga Trails Project promotes its work and message to important audiences. Its involvement is an opportunity to make connections which may prove to be valuable in the success of other Walking SA projects and initiatives.