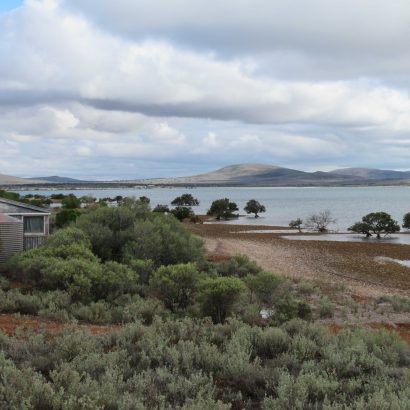 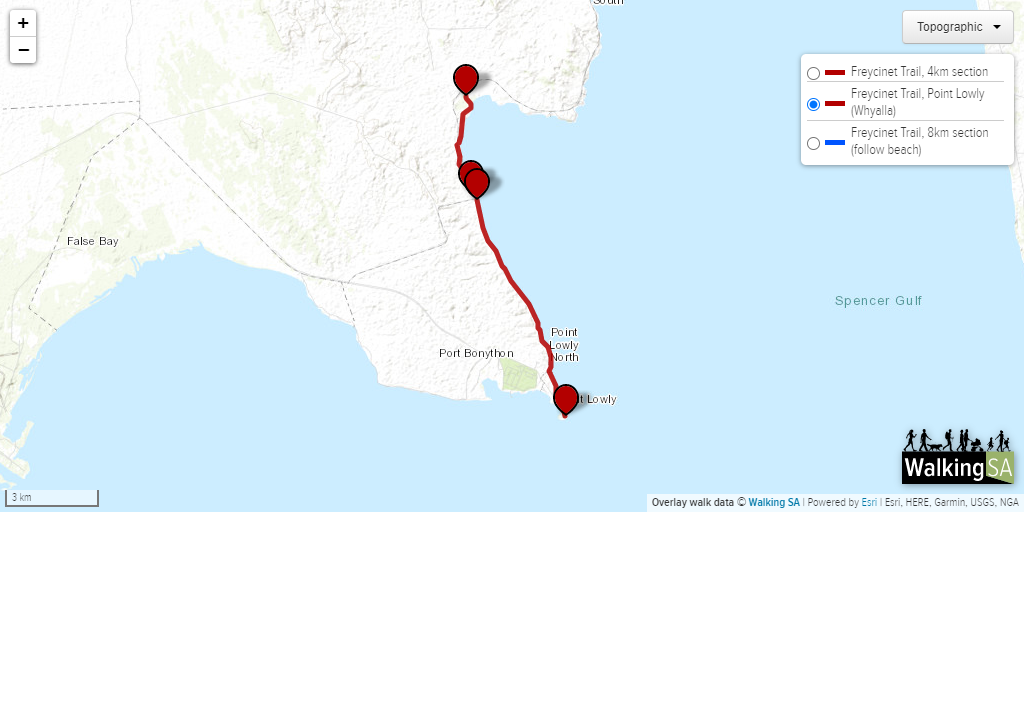 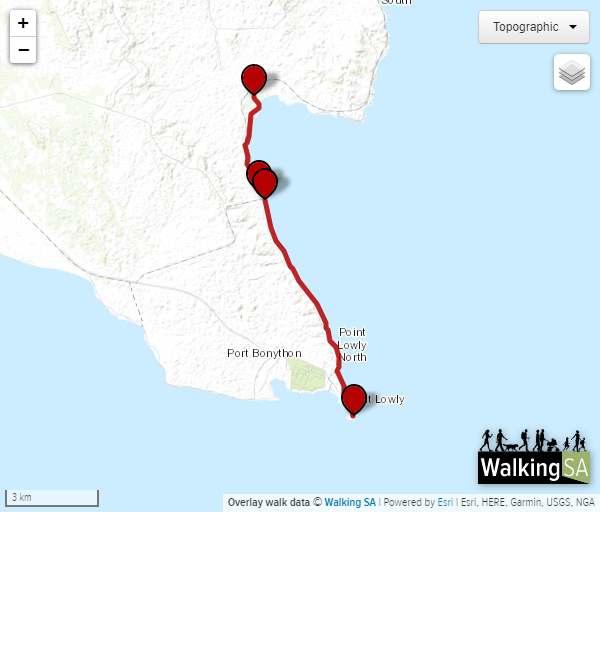 Experience some of the unique coastal landscape with views over the Spencer Gulf and the Southern Flinders Ranges. Walk along dunes, pebble beaches and bushland.

Interpretive signs explain the Aboriginal history, early European exploration, flora and fauna, marine life and contemporary use of modern technology in the area. However some of the signs are in poor condition.

On the northern section, you’ll also see unusual and geologically significant pebble dunes along sections of the coastline. These are naturally occurring shingle beach ridges which were formed about 7000 years ago and are the only ones in South Australia.

The trail is named after early 19th century French navigator Louis Claude de Freycinet who led an exploration into the upper Spencer Gulf in January 1803, 10 months after Captain Matthew Flinders sailed along the Point Lowly coastline.

The coastline here is popular for fishing and some camping.

Our Concerns about walking this trail

This trail is still enjoyed by some, but is unfortunately poorly marked and might be frustrating to follow, many sections of trail are shared with road vehicles, and some of the interpretive signs are in poor condition.

However, if you’ve prepared to find your own way, there’s still plenty to enjoy about this walk. However, some people find cycling or driving the trail preferable (view route of 8km driving section).

The trail has often been described as being 12km long and consisting of two sections:

The trails have been previously marked with round, waist-high yellow metal poles. They don’t contain any naming, directions or arrows. They are generally in poor condition, and are sometimes used for trail sections that can be cycled (roads) where there may be a second parallel walking trail.

However these descriptions might be deceiving to someone planning to undertake the walk, so we’ve clarified them below:

This section of trail is in the south, departing northwards from the Point Lowly Lighthouse.

Walkers may suspect the way the trail has been described, as ‘a hiking, cycling and driving trail’ or a ‘shared-use trail’, as simply meaning the trail is a road. It is, this is true, the road is a dirt road, sometimes called the ‘coast emergency access road’ and used by 4WDs. However, most people who walk this 8km section prefer to walk directly on the beach, and use the available walking trails when they see them, and if the beach is found to be problematic, resort to walking along sections of the road. In some places there are several parallel roads and tracks.

We recommend this 8km section over the 4km section.

This section is often described as hiking-only, but we find this claim to be sometimes tenous, as in the most part it follows 4WD tracks or rough road paths.

Some maps don’t show this 4km section at all, just showing the 8km southern section.

If you walk this 4km section, it may be harder to follow, as there are numerous shacks. The northern trailhead is difficult to find.

A study in 2016 [refer to map on page 73] recommended a proposal that the complete 12km Freycinet Trail be upgraded with new signage, new interpretive signage, trail upgrades and trail extensions. As at mid 2019 we have not seen news as to whether the master plan may be adopted and trail upgraded. The proposal was to include cyclists; and to loop the trail around Point Lowly; extend the trail west from Point Lowly along the coast past Stony Point, and Black Point, back to and along Fitzgerald Road.

Views over the Spencer Gulf from the Freycinet Trail 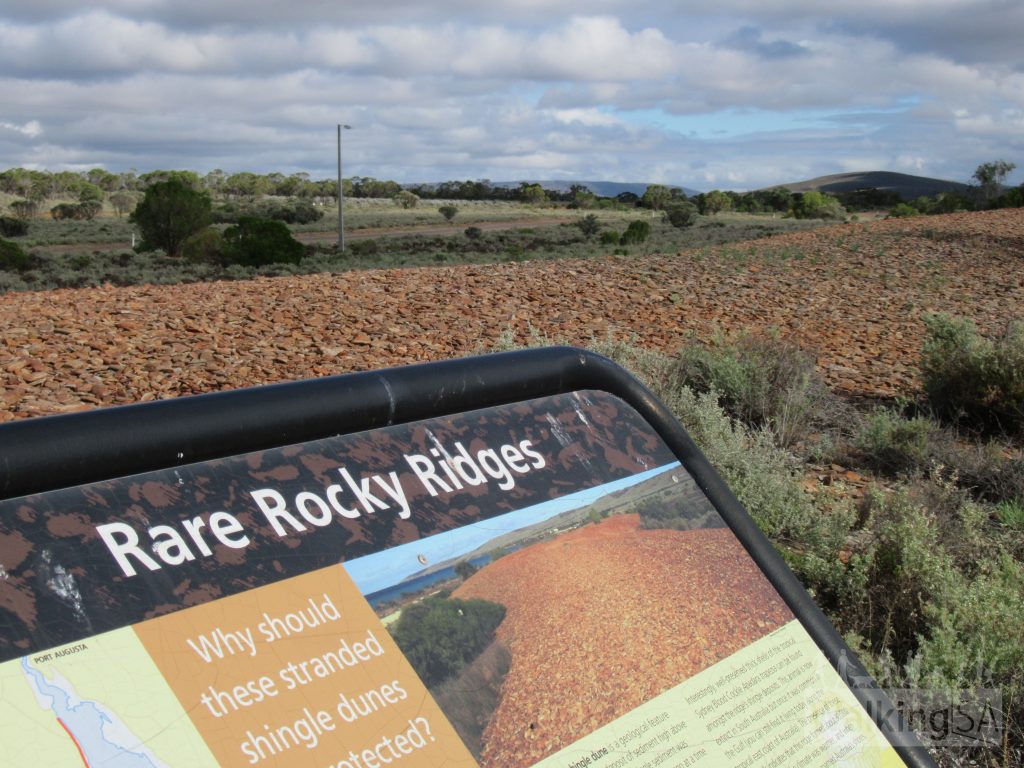 The unusual and geologically significant pebble dunes. These are naturally occurring shingle beach ridges which were formed about 7000 years ago and are the only ones in South Australia. 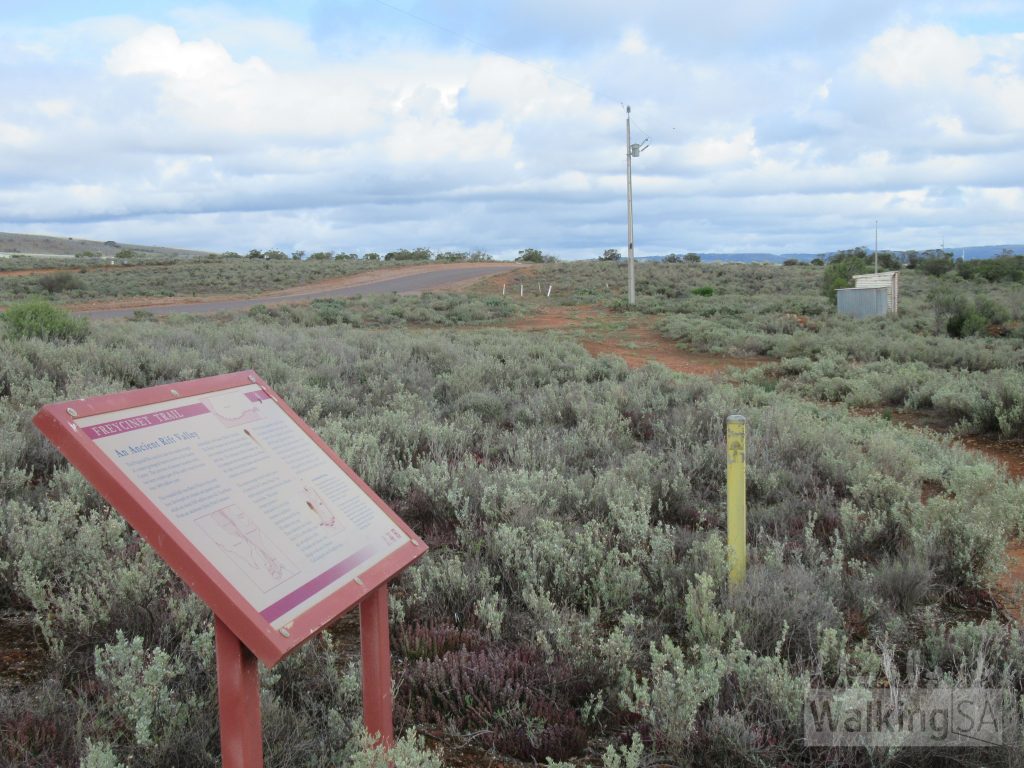 The Freycinet Trail is marked with these yellow posts

Views over the Spencer Gulf from the Freycinet Trail 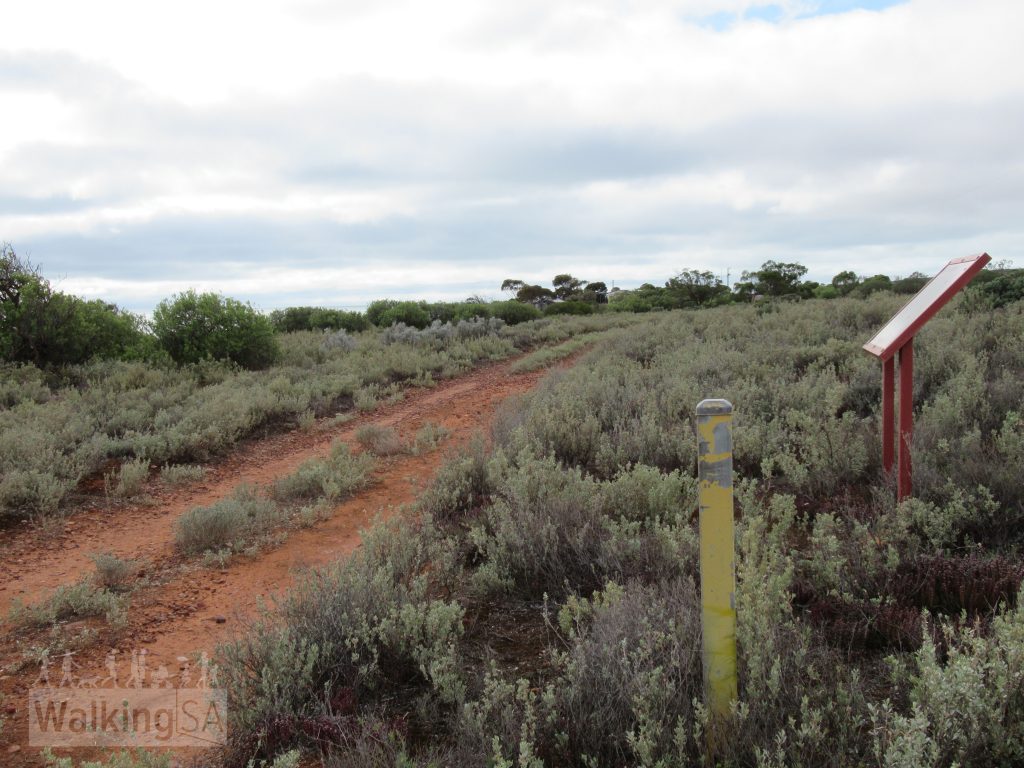 The Freycinet Trail is marked with these yellow posts 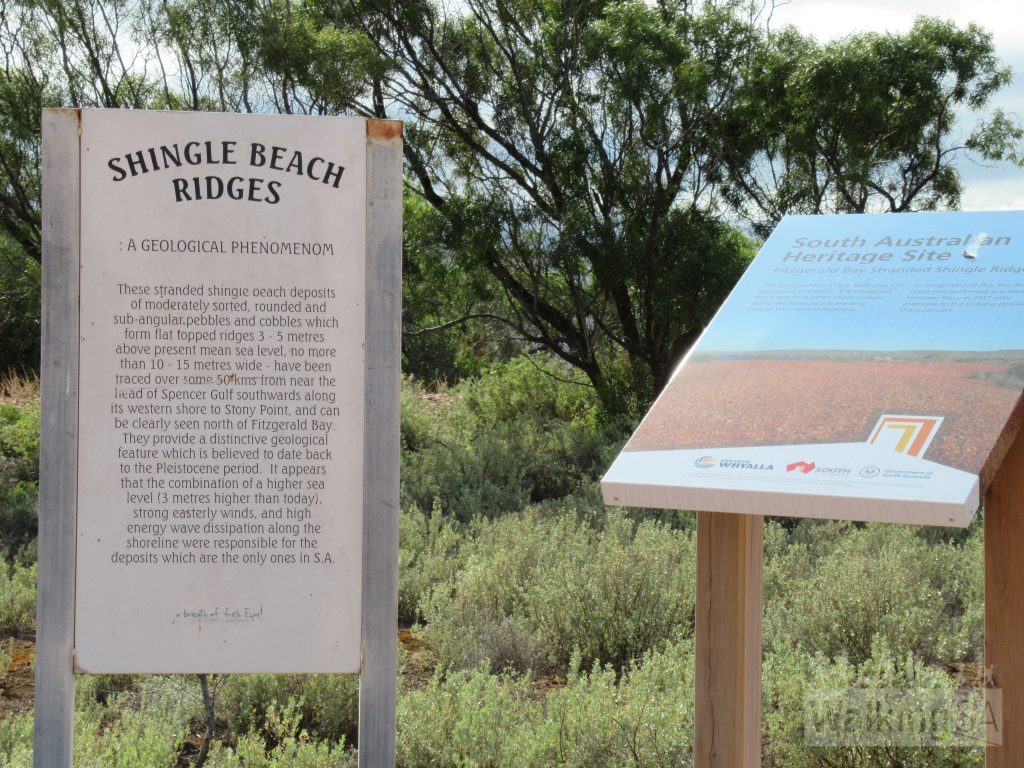 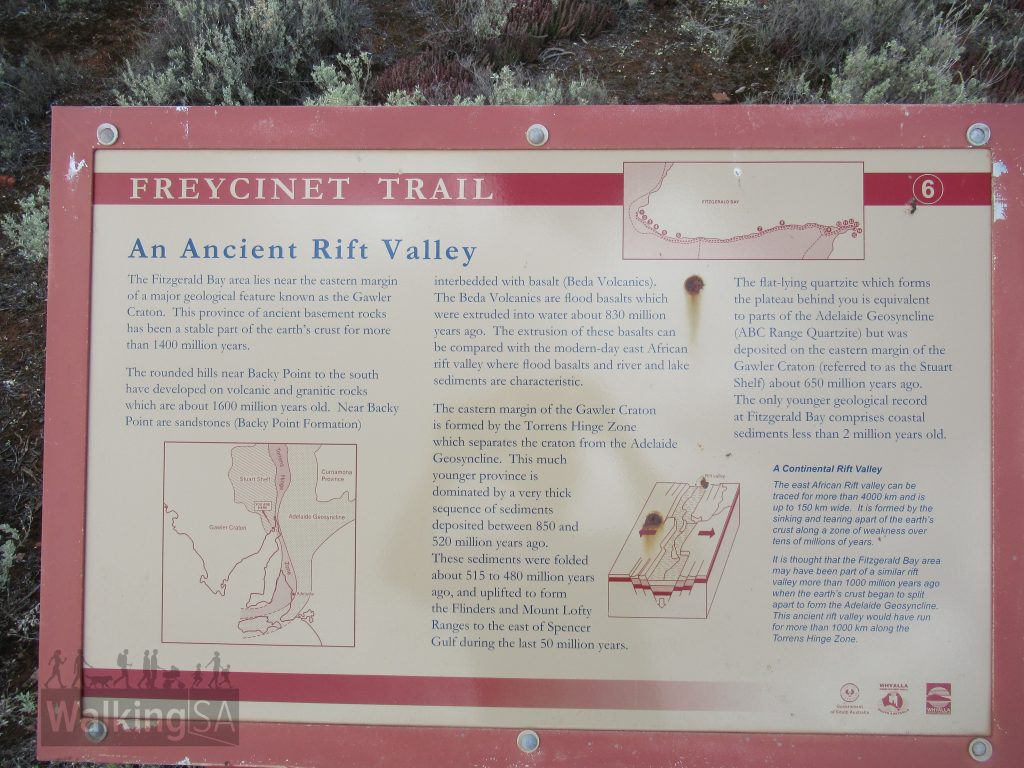 An interpretive sign on Freycinet Trail about the ancient rift valley 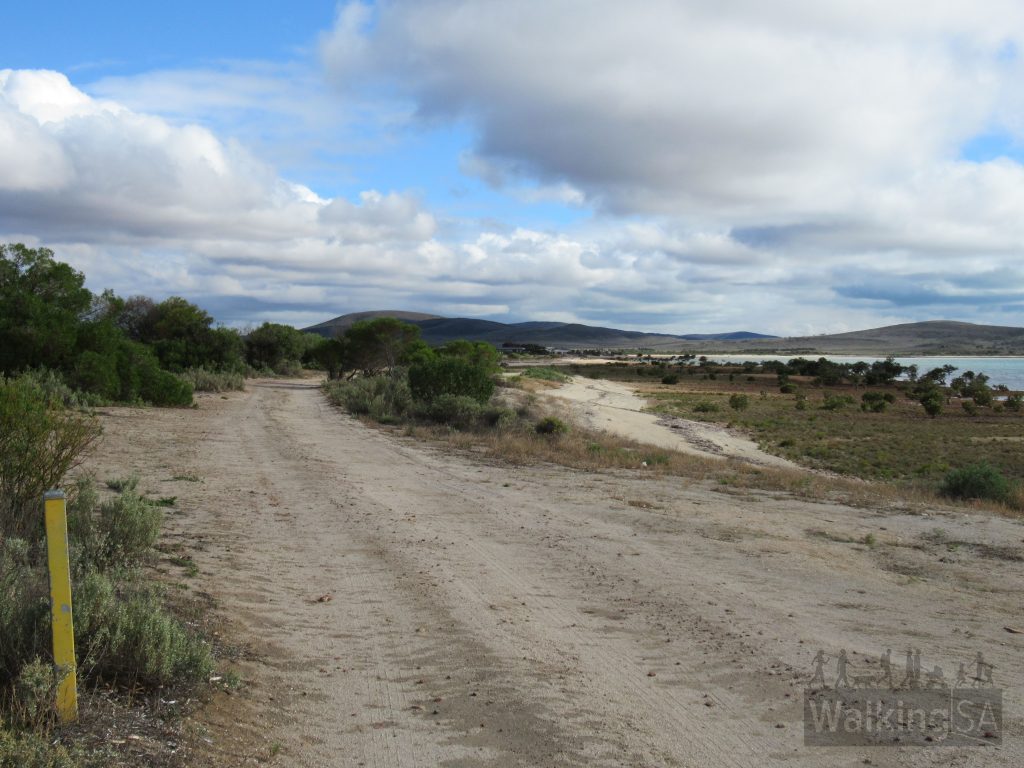 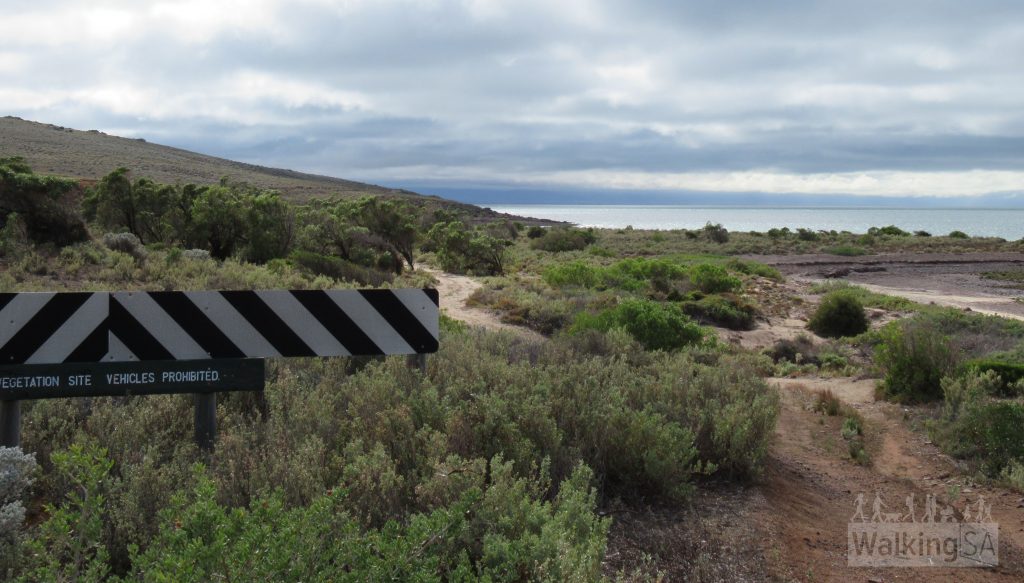 A section of the Freycinet Trail in the north, near the northern end