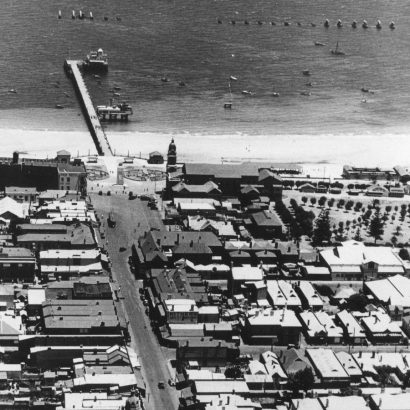 This 60 minute self-guided walk challenges you to uncover Glenelg’s unique past and understand more about its historical importance as South Australia’s first settlement and how it developed over the years.

A self-guided historical walk with brochure, prepared by City of Holdfast Bay.

For thousands of years Pathawilyangga (Glenelg) was a place where the Kaurna people of the Adelaide Plains could seek refuge from summer heat; an area of abundant plant and animal resources, and a meeting place for celebration, ceremony and trade.

In October 1836, eight ships arrived in South Australia, landing first at Kangaroo Island, southwest of Adelaide. Amongst them was The Rapid carrying Colonel William Light, and The Cygnet. Their mission was to survey the South Australian coast in hope of seeking an ideal place for settlement. This arrival would signal a new chapter for the Kaurna people and Glenelg. Read more about this in Kaurna yart-ana, Holdfast Bay’s Cultural Map.

Whilst The Rapid stood off-shore near the mouth of the Patawalonga, a gale sprang up. Fearing the worst, relief came when the anchor held. Consequently, Light named the harbour with good anchorage, ‘Holdfast Bay’. With its surrounding rich country and fresh water lagoons the area appealed to Light as an ideal place for settlement. Following Light’s decision, the remaining ships set sail for the mainland. By the time The Buffalo arrived on 28 December 1836 – Proclamation Day, there was already a village of tents, huts and temporary shelters.

In 1839, the township was named ‘Glenelg’ in honour of Lord Glenelg, Secretary of State for the colonies. From a settlement that began in tents and prefabricated huts, Glenelg developed into South Australia’s leading seaside destination.