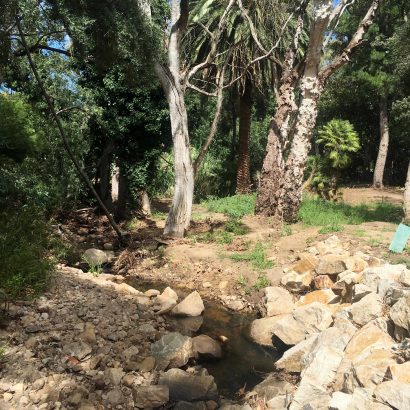 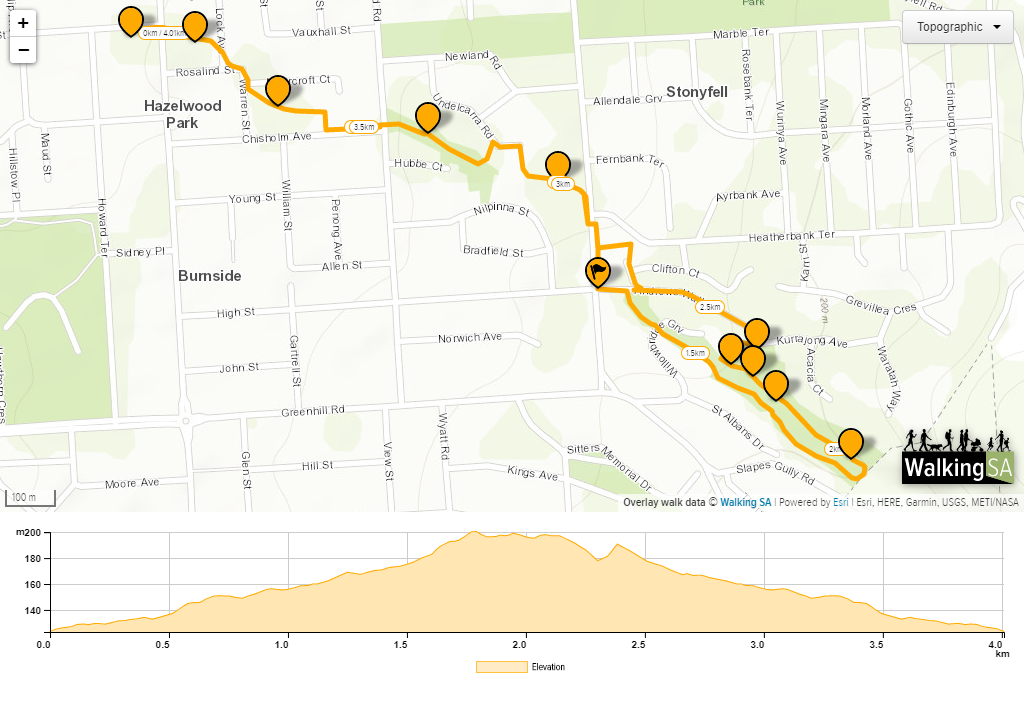 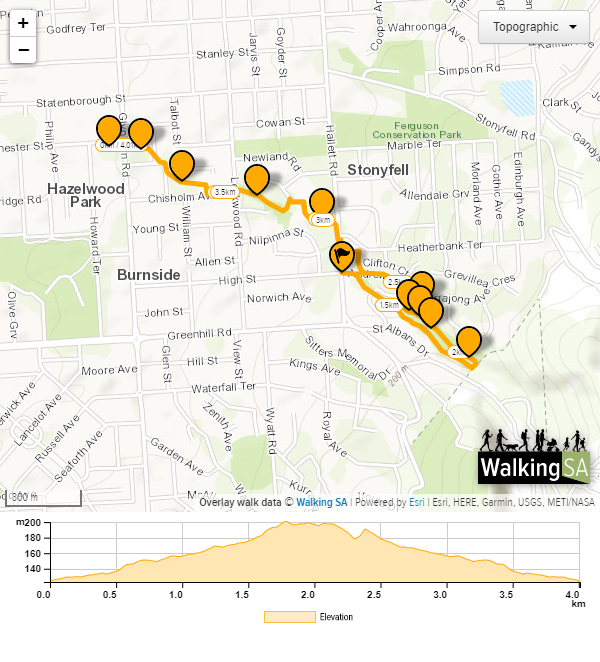 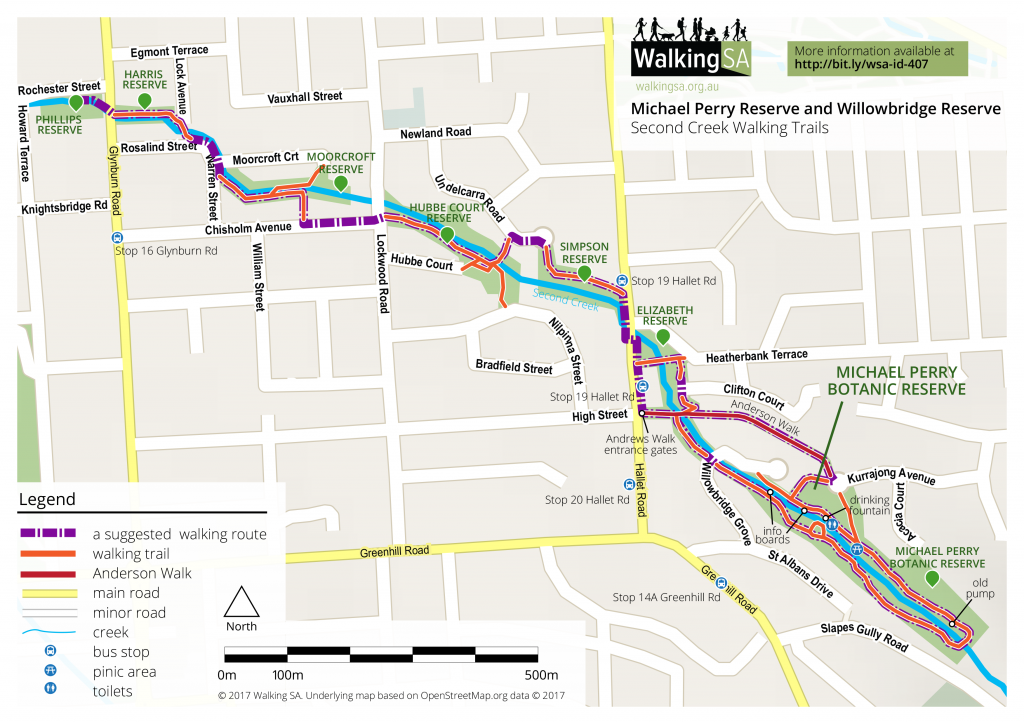 A shorter version of this walk is to do a 1.7km loop in the Michael Perry Botanic Reserve.

The reserve is suitable for dog walking. There is a picnic area and toilets. Andrews Walk and the Michael Perry Botanic Reserve is open between 5am and 10pm daily. 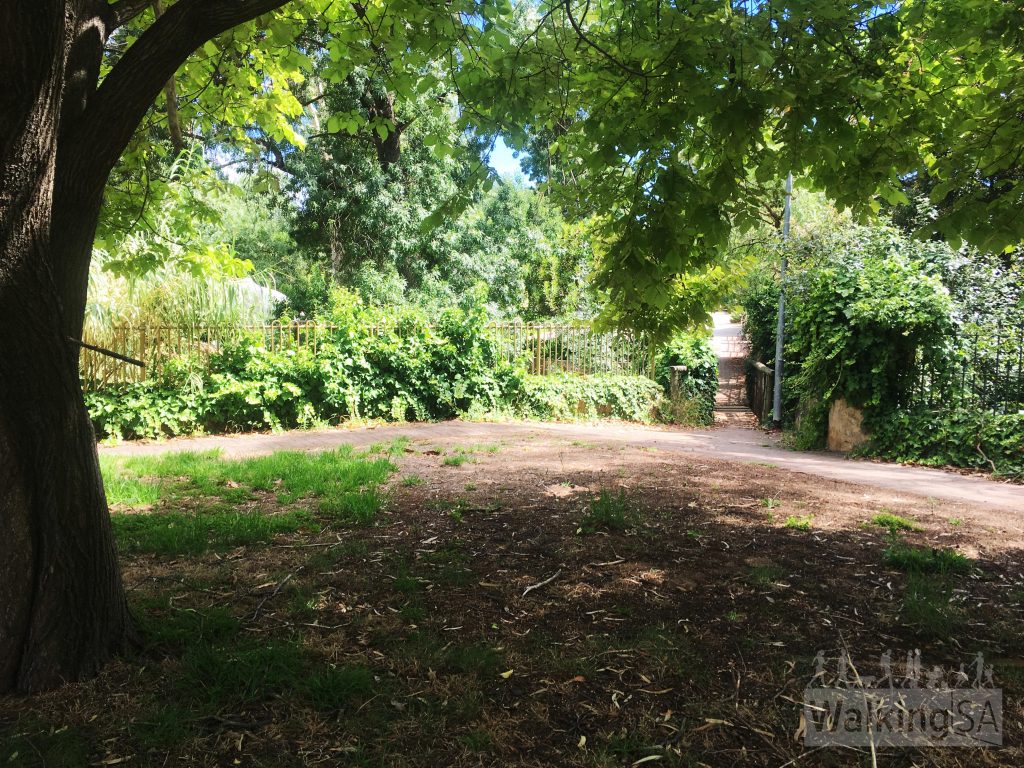 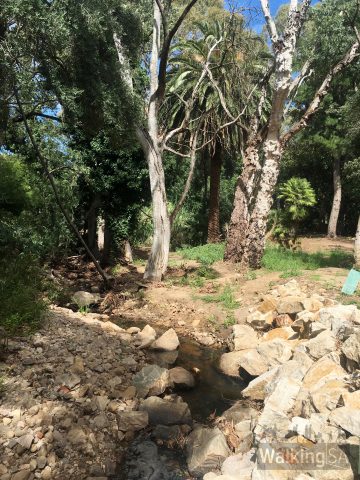 Second Creek meanders through several reserves, this one is Harris Reserve 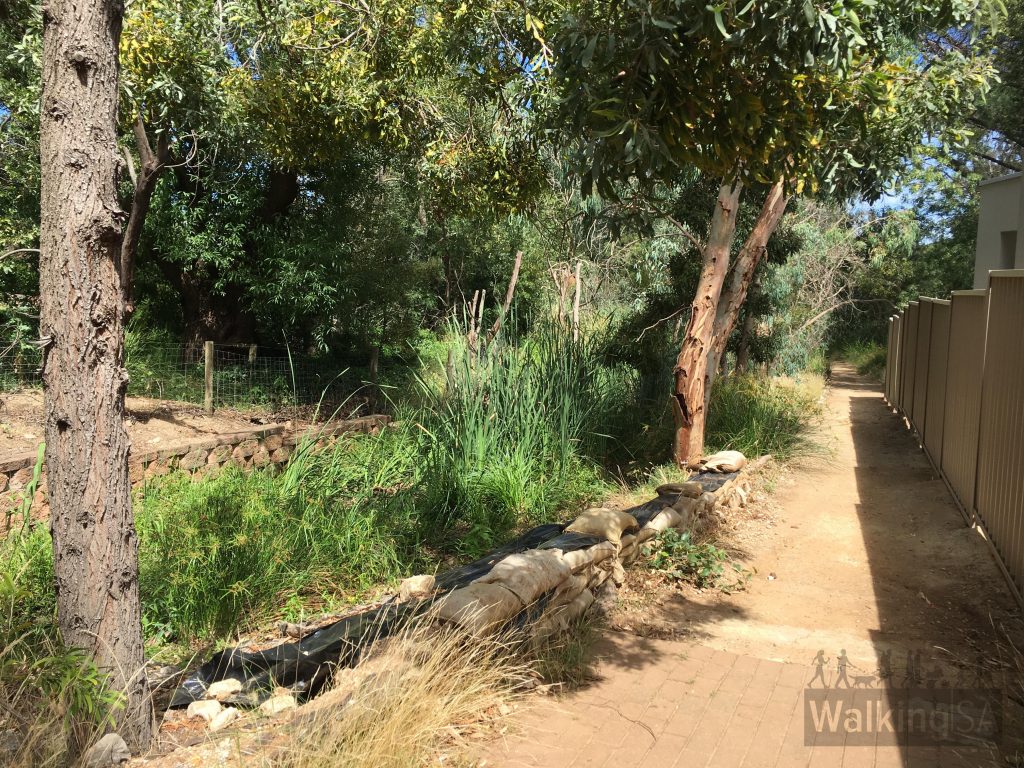 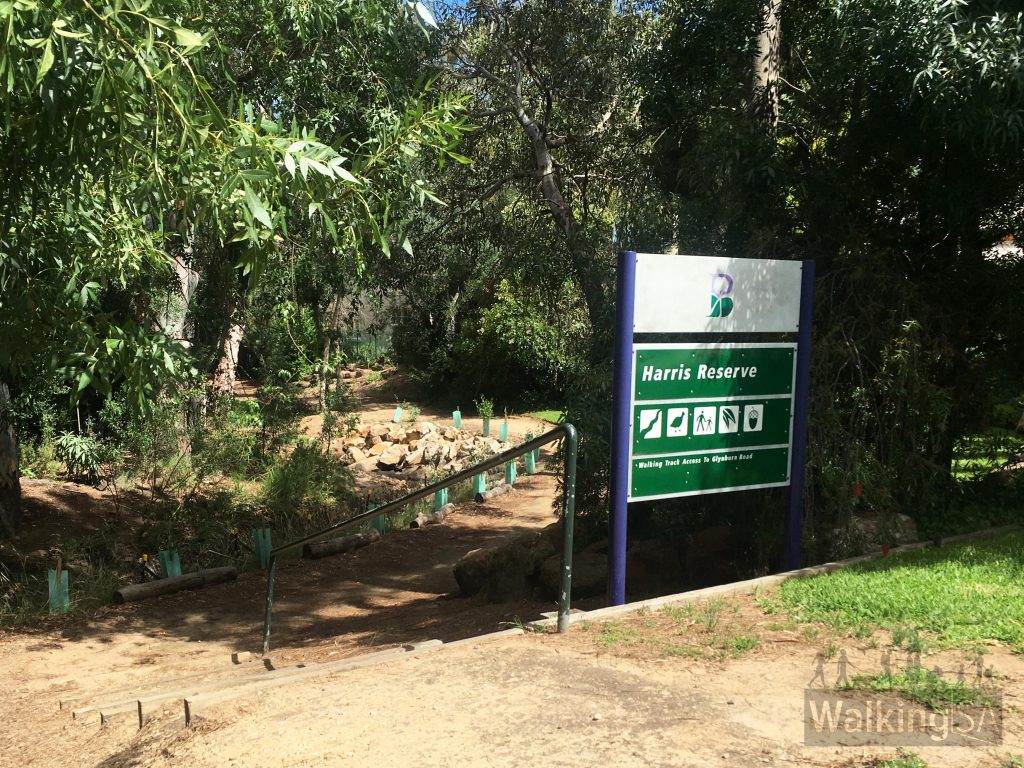 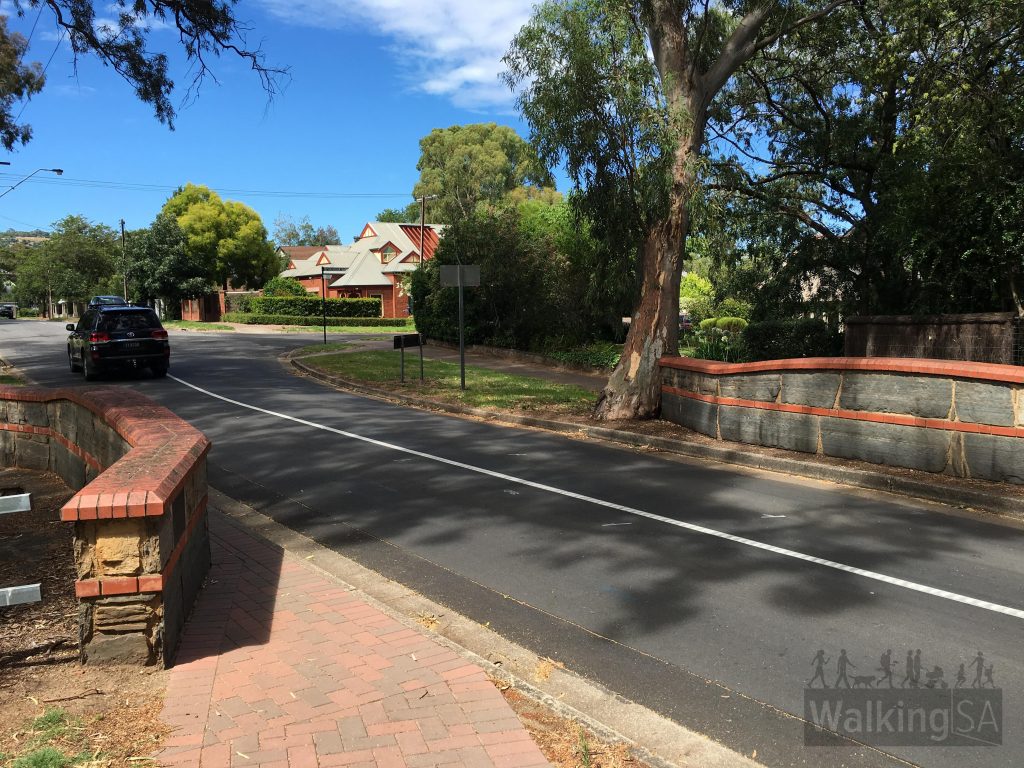 The bridge beside Hubbe Court Reserve. The land adjoining the creek immediately east of the bridge was reserved as a public watering place on the 1858 plan of the village of Burnside. 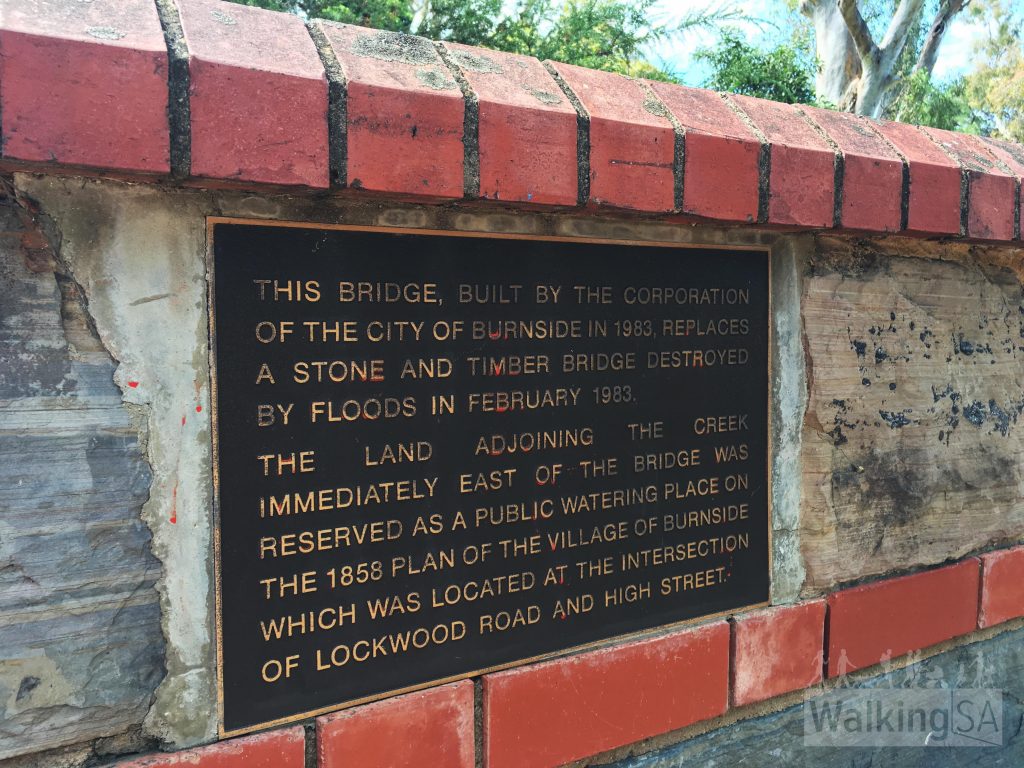 The plaque on the bridge beside Hubbe Court Reserve reads: "This bridge, built by the Corporation of the City of Burnside in 1983, replaces a stone and timber bridge destroyed by floods in February 1983. The land adjoining the creek immediately east of the bridge was reserved as a public watering place on the 1858 plan of the village of Burnside which was located a the intersection of Lockwood Road and High Street." 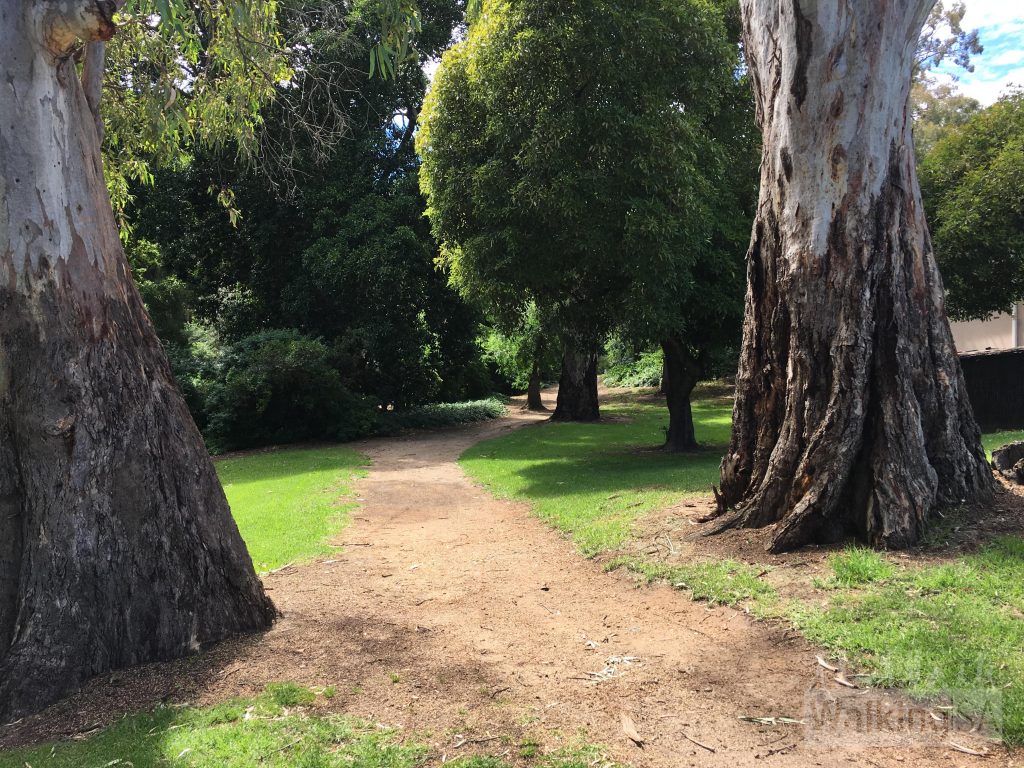 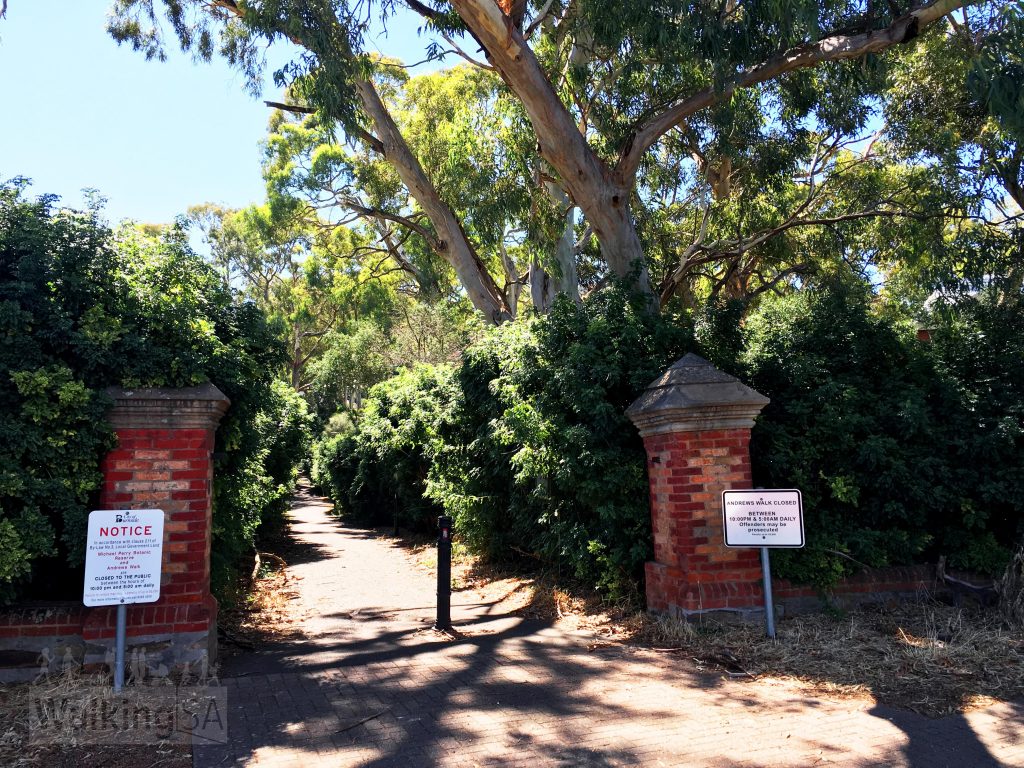 Entrance gates to Andrews Walk. These gates were the original entrance to the historic 1852 house. The property was later subdivided 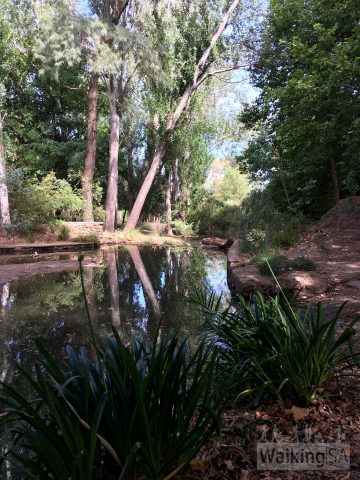 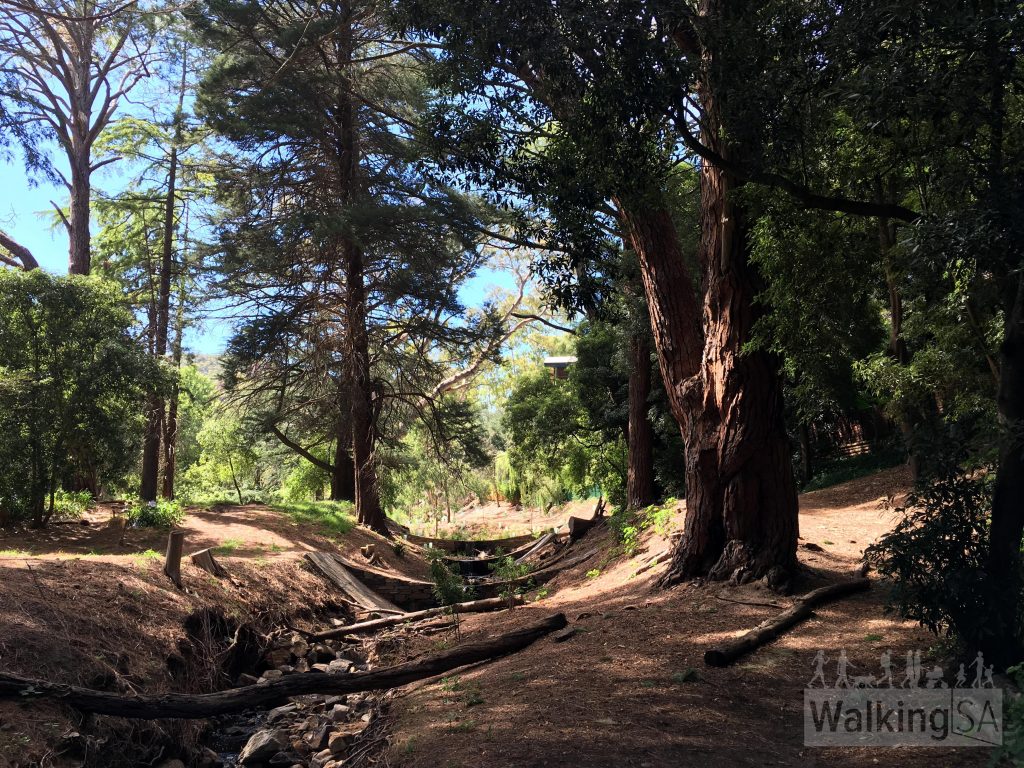 The forest and Second Creek in Michael Perry Botanic Reserve 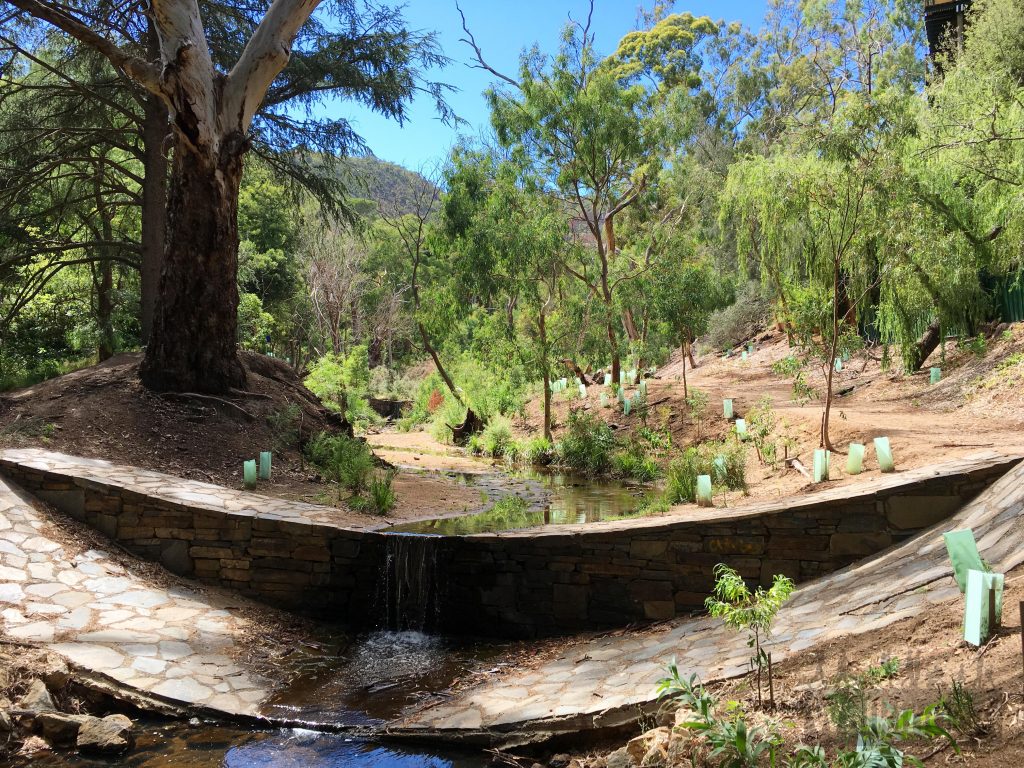 Rock ramps help to reduce erosion. Channels and resting ponds have been built into the ramps to assist the small, rare native fish Mountain Galaxia (about 10cm long) to move up and down the creek 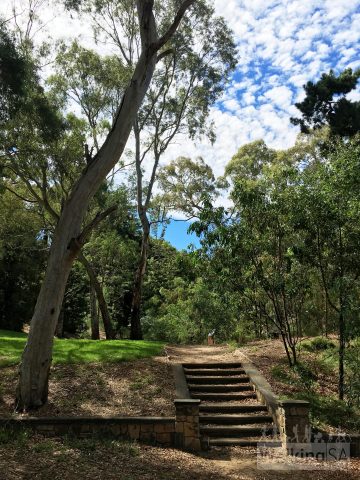 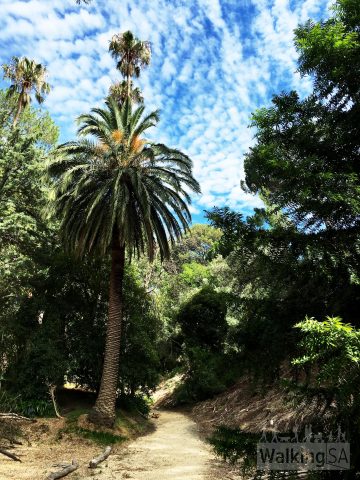 The first owner of the nearby stately home Clifton Lodge, Nathaniel Knox, established an extensive garden here along Second Creek, importing many exotic species. There are remnants of those plants in the Reserve 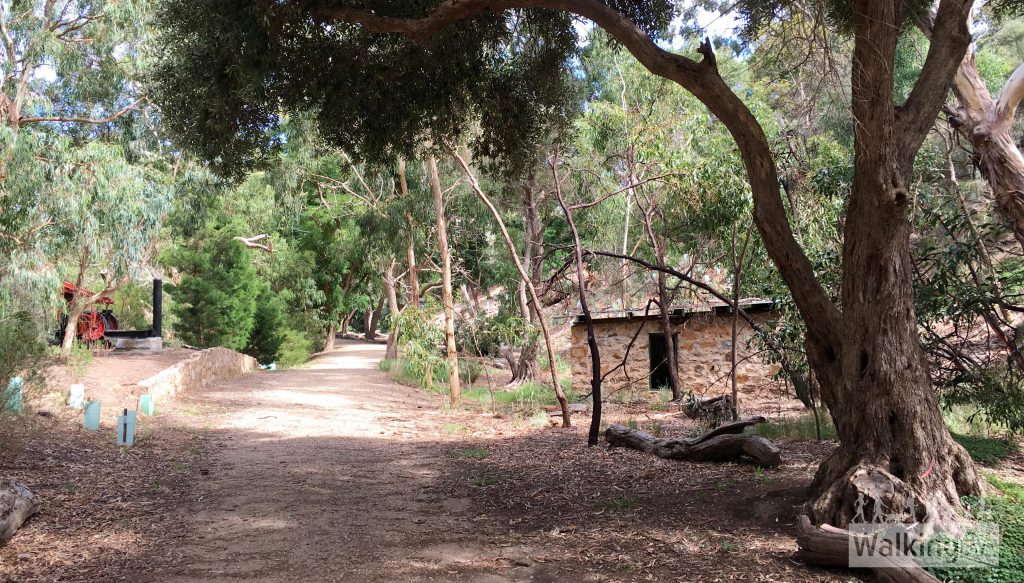 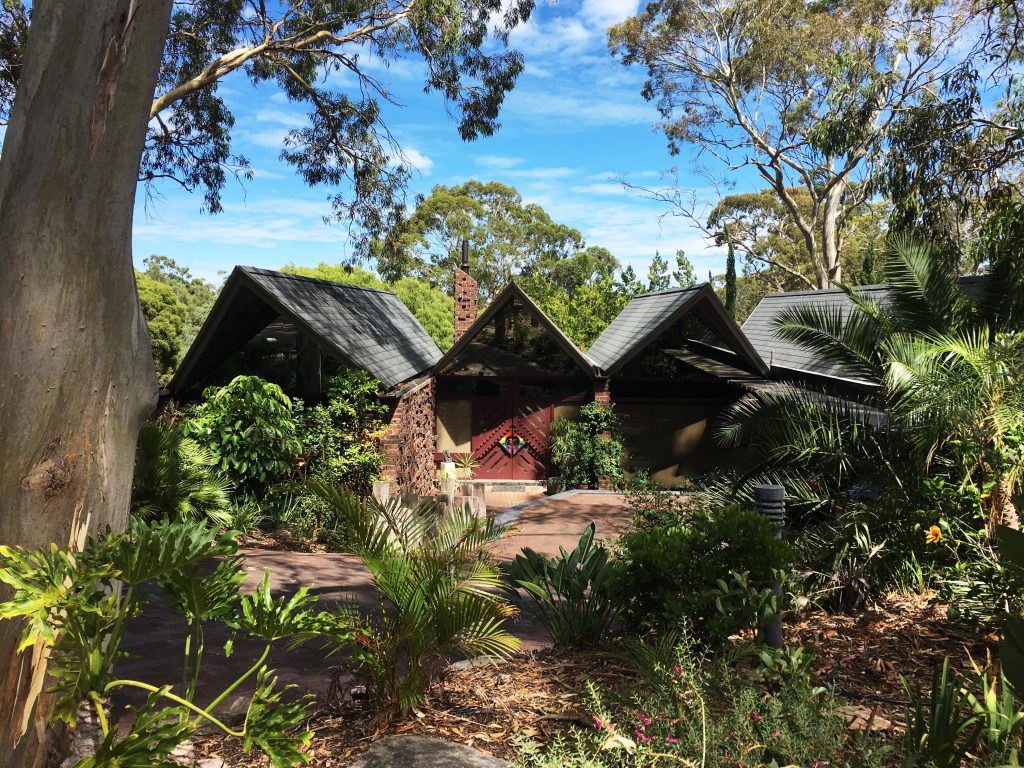 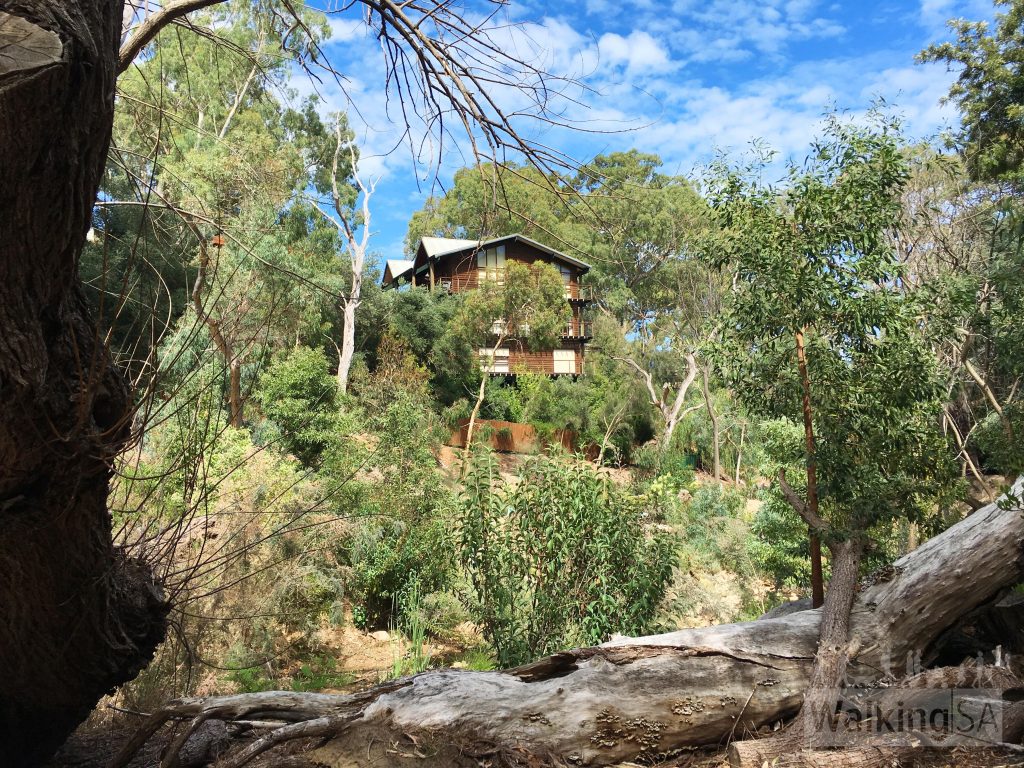