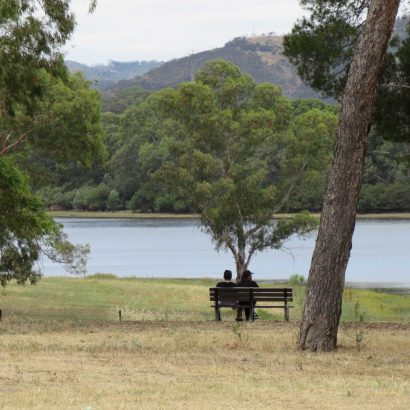 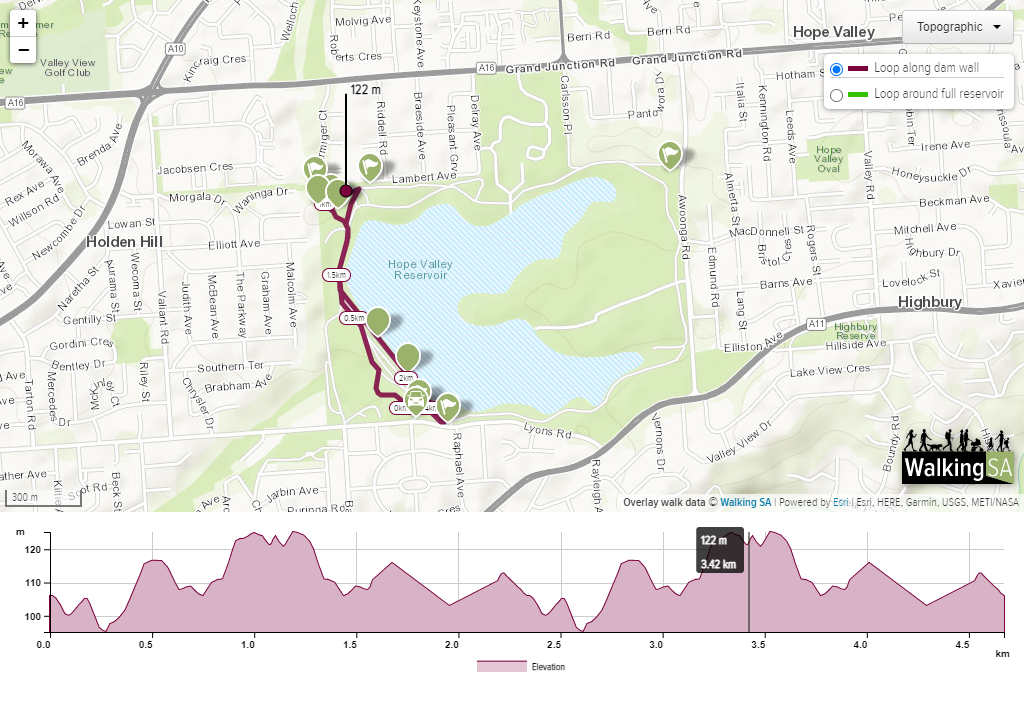 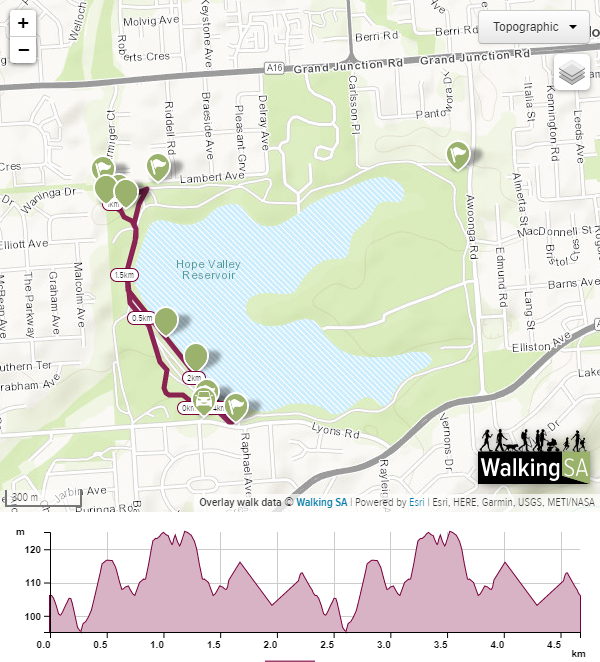 With views across the reservoir and to the hills beyond, step into the reservoir reserve to walk or cycle along the 800 metre dam wall and explore some of the forested picnic areas.

Although 4.9km of shared use trail has been constructed or adapted from service tracks, most of the trails are concentrated on the western side of the reservoir reserve, adjacent to the dam wall.

In 2021 an informal nature play area and outdoor fitness equipment will be developed. 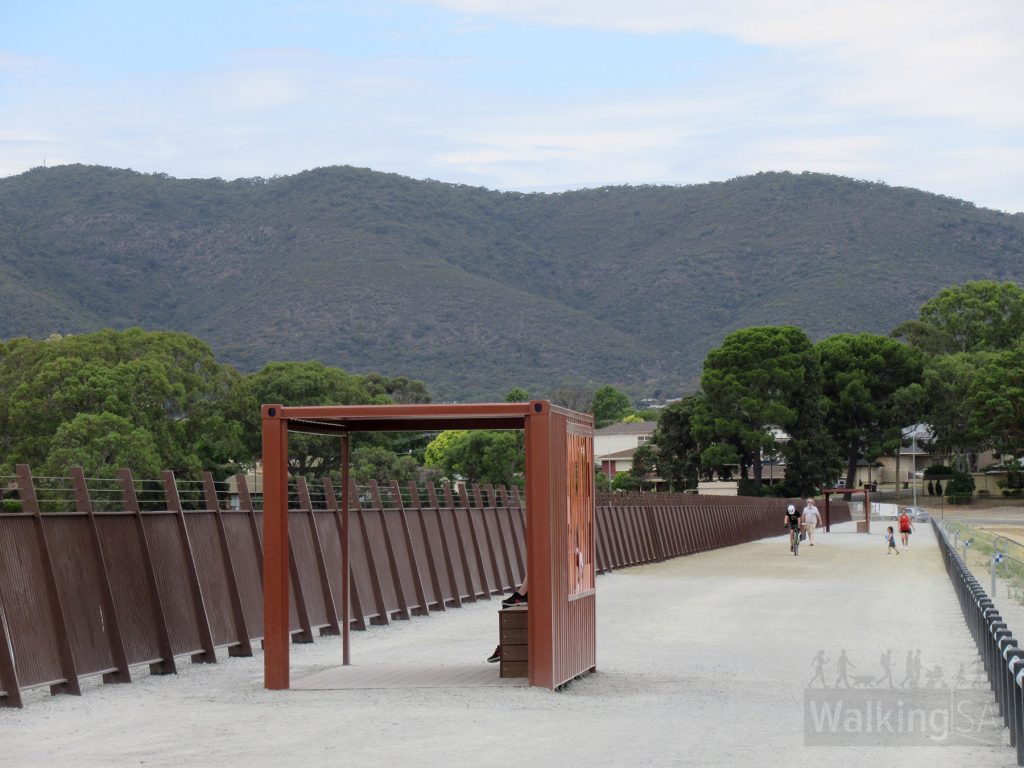 Walking over the dam wall, there are two shelters overlooking the reservoir

This suggested walk is about 2.3km return, and is marked in purple on our map.

At the far end of the dam wall, in the north west of the reservoir reserve, is a pleasant park area in the forest, away from roads but adjacent the busway. There are toilets, picnic shelters and a water fountain, as well as the `HOPE` letter sign, with views across the reservoir to the hills. 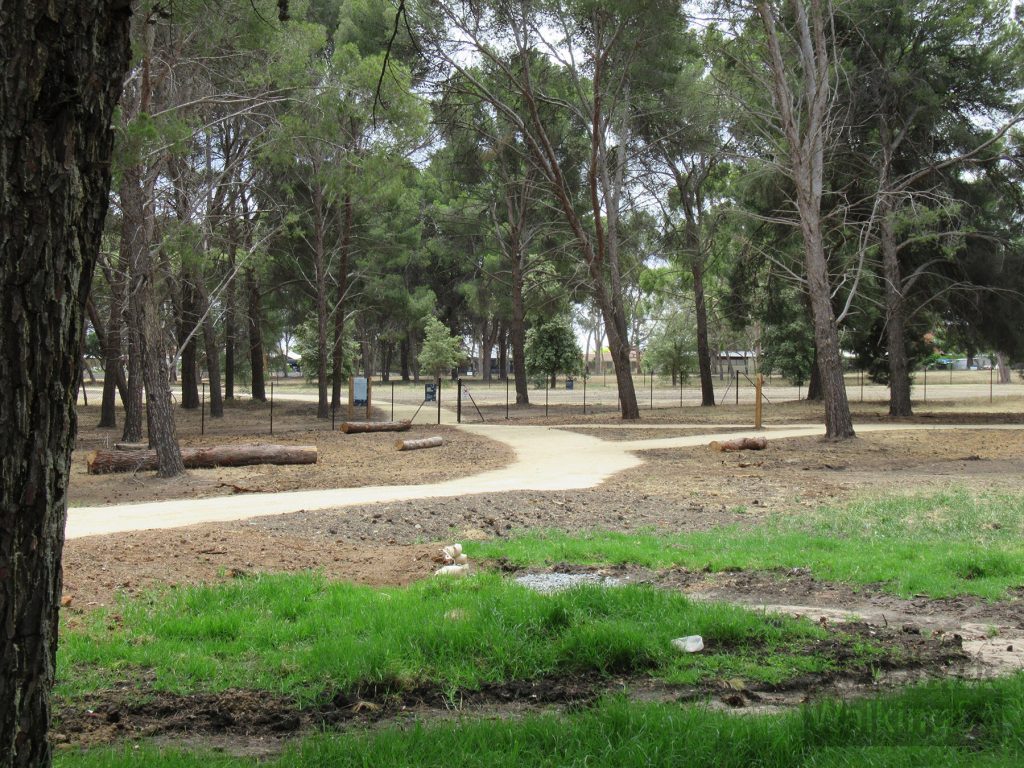 This suggested walk is a 5.2k circuit, and is marked in green on our map.

Explore the full reservoir reserve by walking a full loop of the reservoir. You could start from any of the access locations listed below, and walk clockwise or anticlockwise.

The trail is also closed during periods of operational activity (the gates will be closed).

Dog walking is not permitted, as dogs can carry harmful organisms that can easily contaminate the water and present a risk to the safety of the drinking water. Dogs also pose a threat to local native birds and wildlife. Assistance animals are accepted.

Some people may be disappointed that there is no access to the water edge or for kayaking or fishing, and that much of the forested non-operational areas of the reservoir reserve remain off-limits.

It’s an important space to open up to local people, and in time we hope that more of the non-operational forested areas of the reservoir reserve, particularly alongside Lower North East Road and Awoonga Road could be opened up for public access.

Full access conditions, a map and other details can be found at reservoirs.sa.gov.au/reservoirs/hope-valley.

The reservoir reserve can be accessed from four locations:

European history of the reservoir

The Hope Valley Reservoir was constructed between 1869 and 1872 as an off-stream storage reservoir to serve the growing Adelaide. It was the city’s second reservoir, the first being at Thorndon Park which opened in 1860. Originally water was diverted via a 5km viaduct from the Gorge Weir on the River Torrens / Karrawirra Parri. The viaduct was replaced in 2008 with a 3.4km long pipeline. In 1977 the water treatment plant was constructed on the northern side of the reservoir reserve, off Grand Junction Road, to clean and filter metropolitan Adelaide’s water supply. 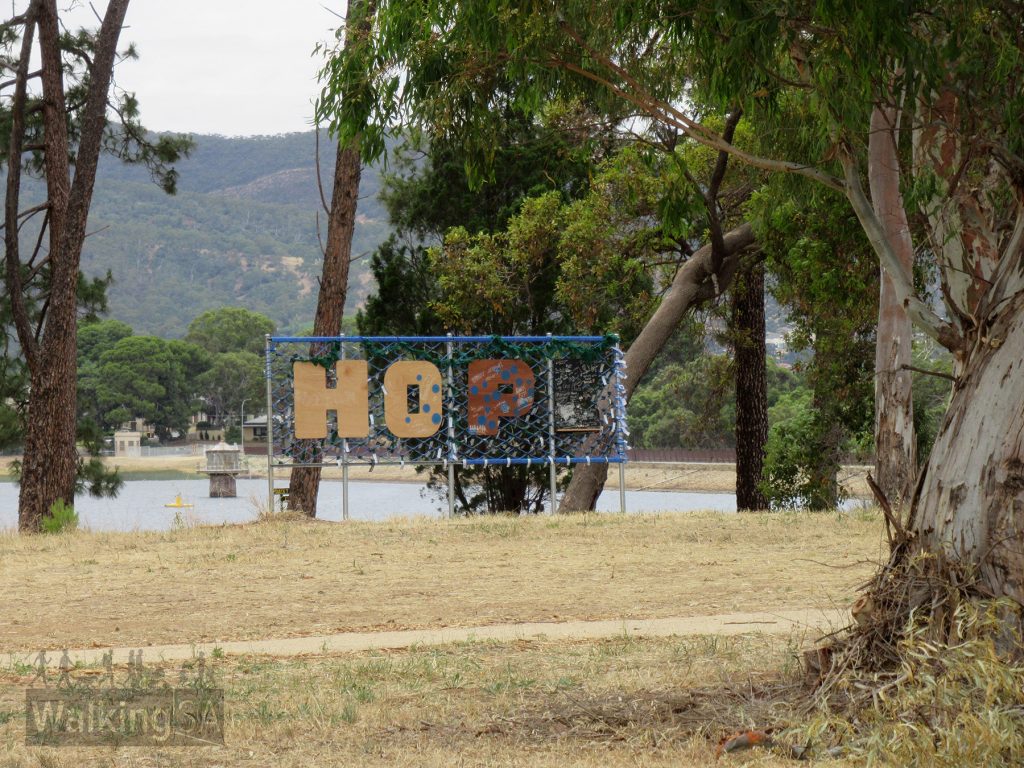 Walking over the dam wall, there are two shelters overlooking the reservoir 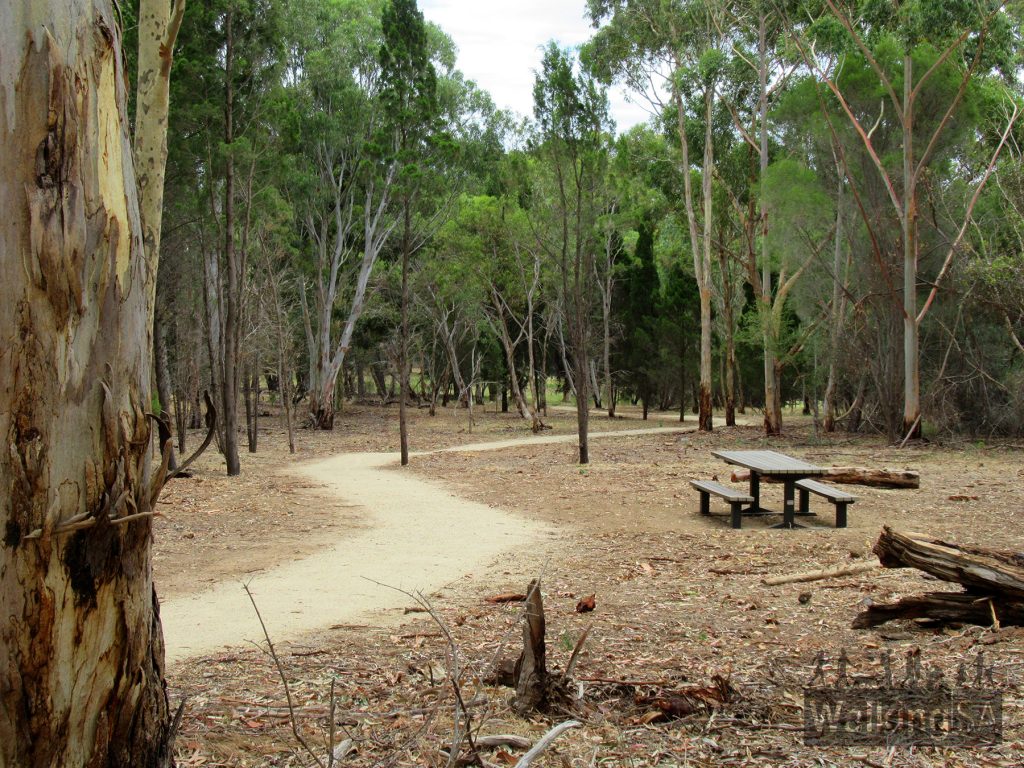 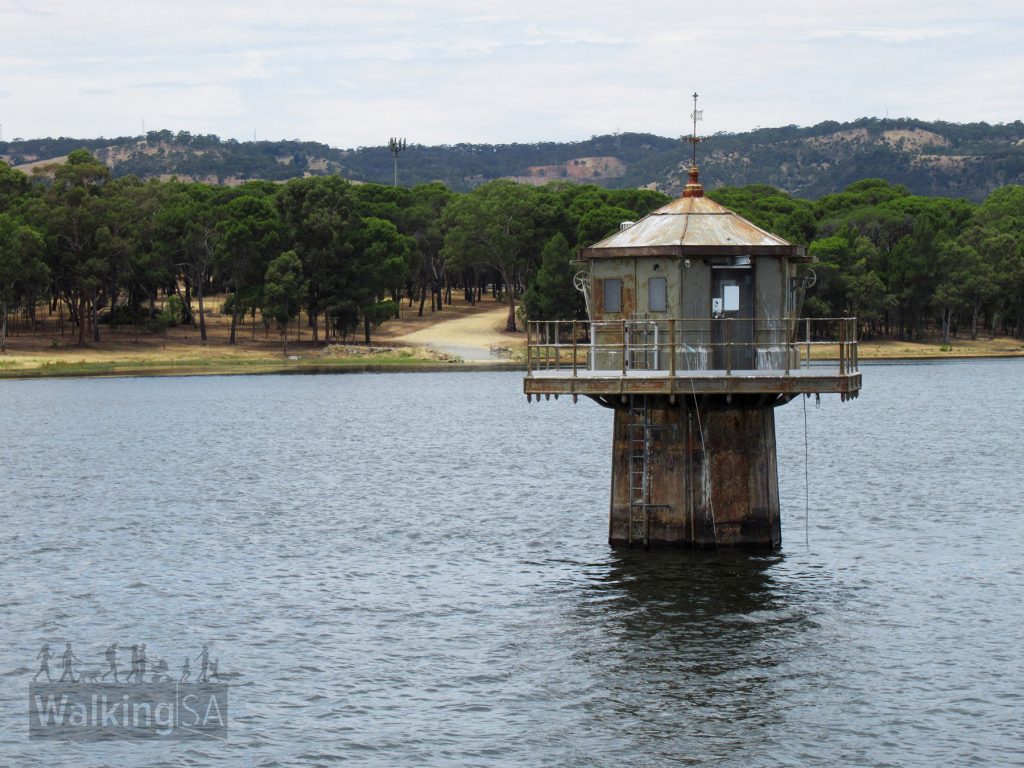 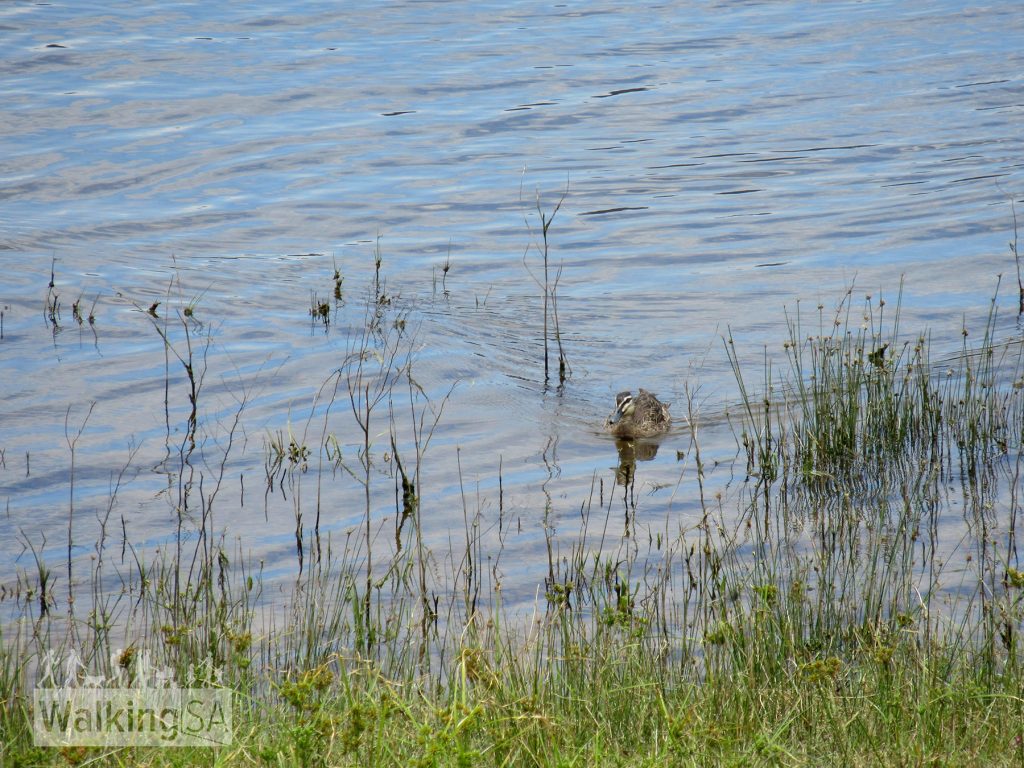 Birdlife on the reservoir. Some people may be disappointed that there is no access to the water edge or for kayaking or fishing 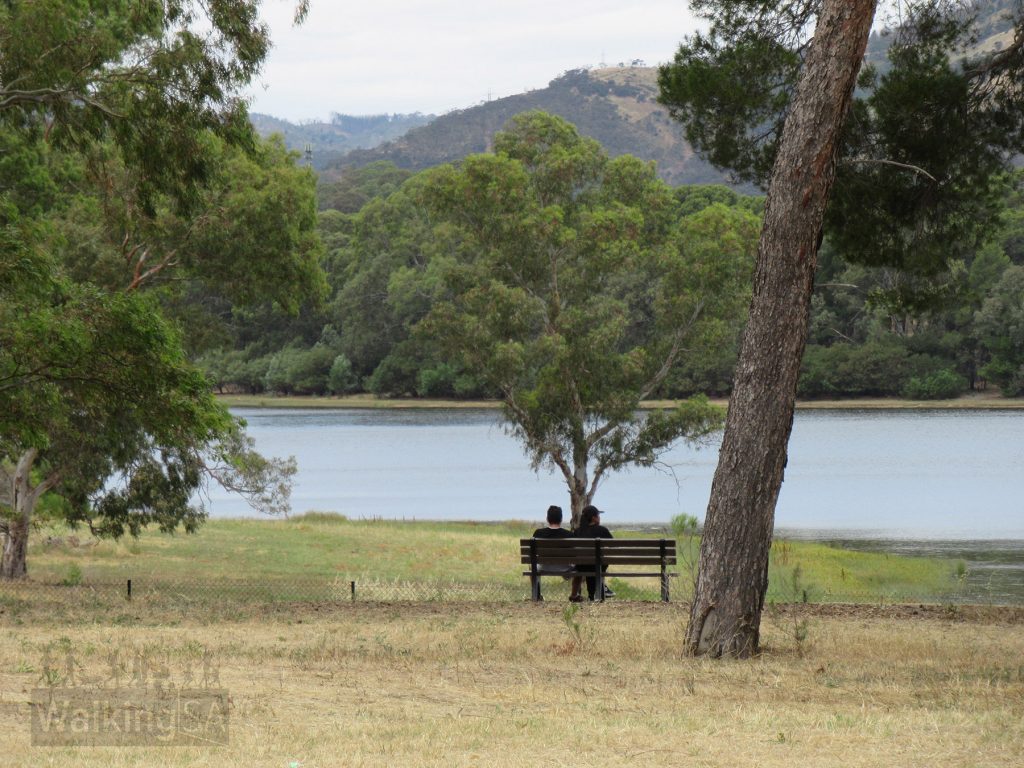 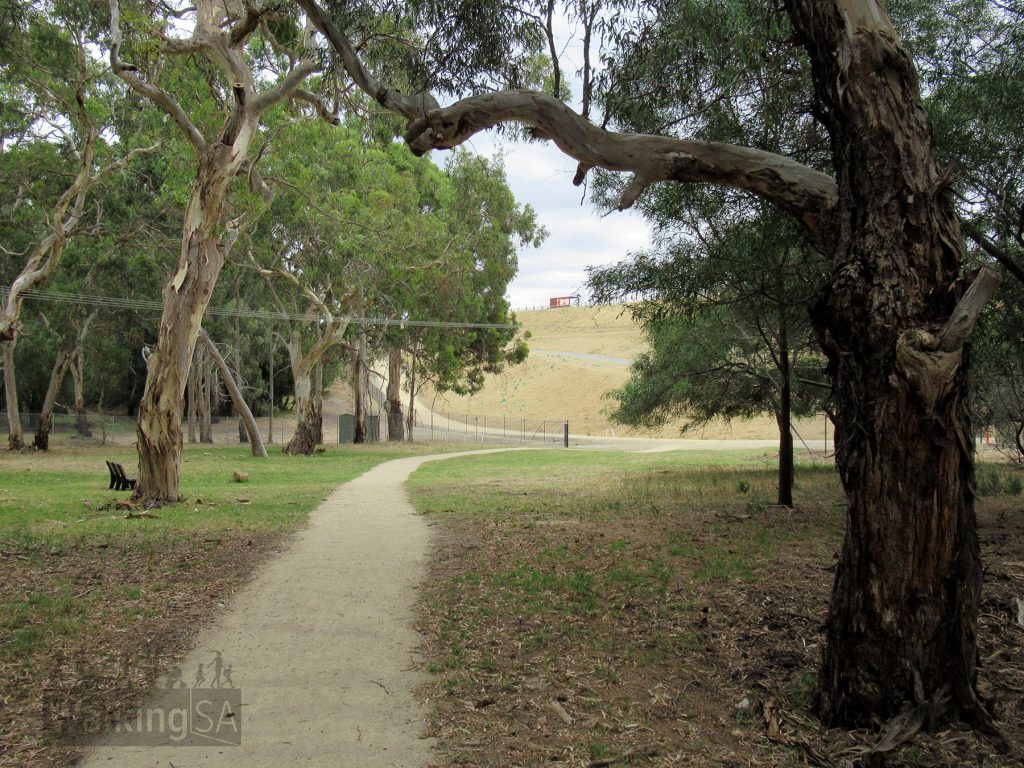 The meandering trail from the Lyons Road carpark, heading towards the dam wall with the climb back up to the far end of the dam wall just visible 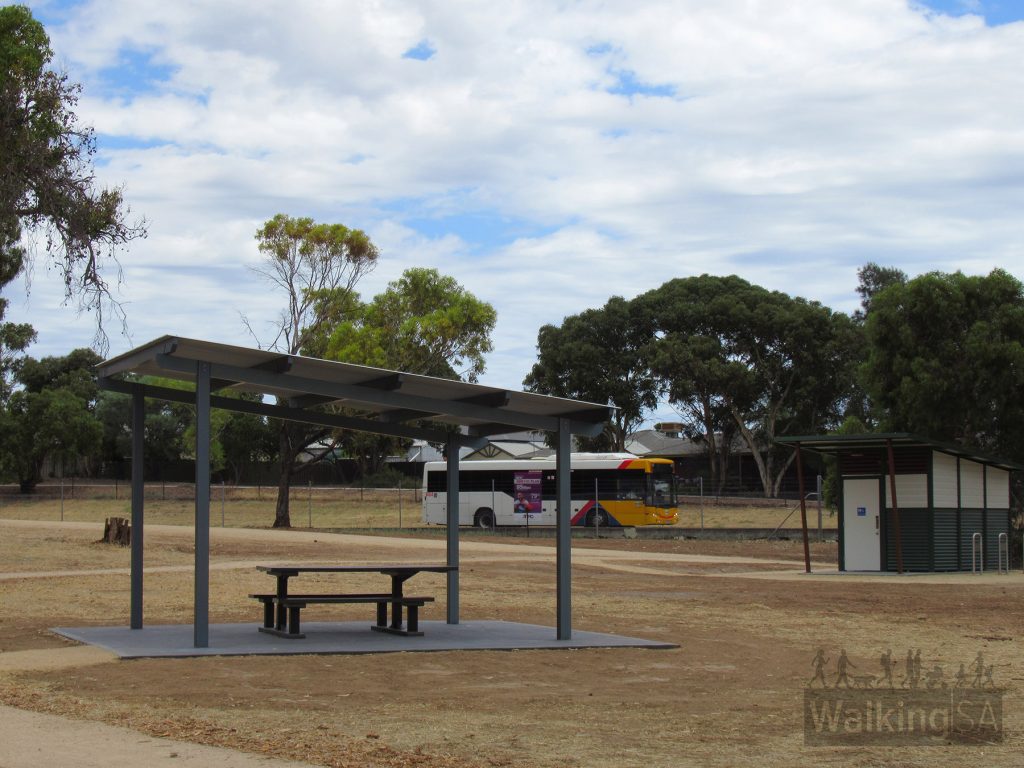 The park in the north western corner of the reservoir reserve has toilets, picnic shelters, seating, meandering path circuits, a water fountain and views over the reservoir 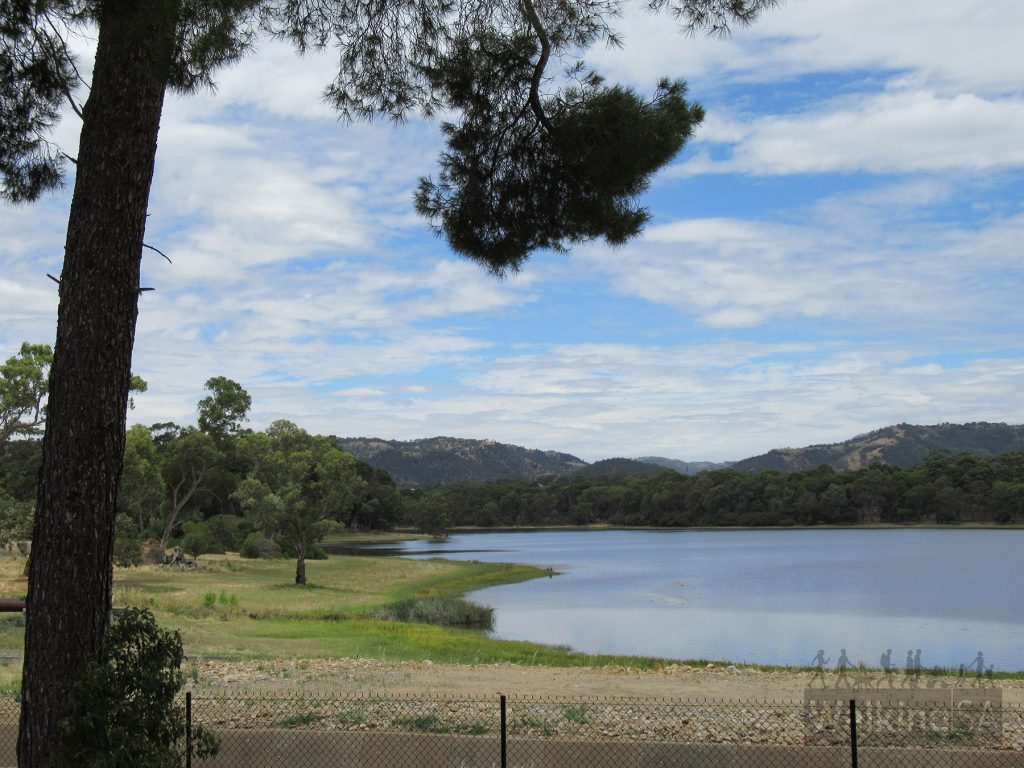 Views over the reservoir 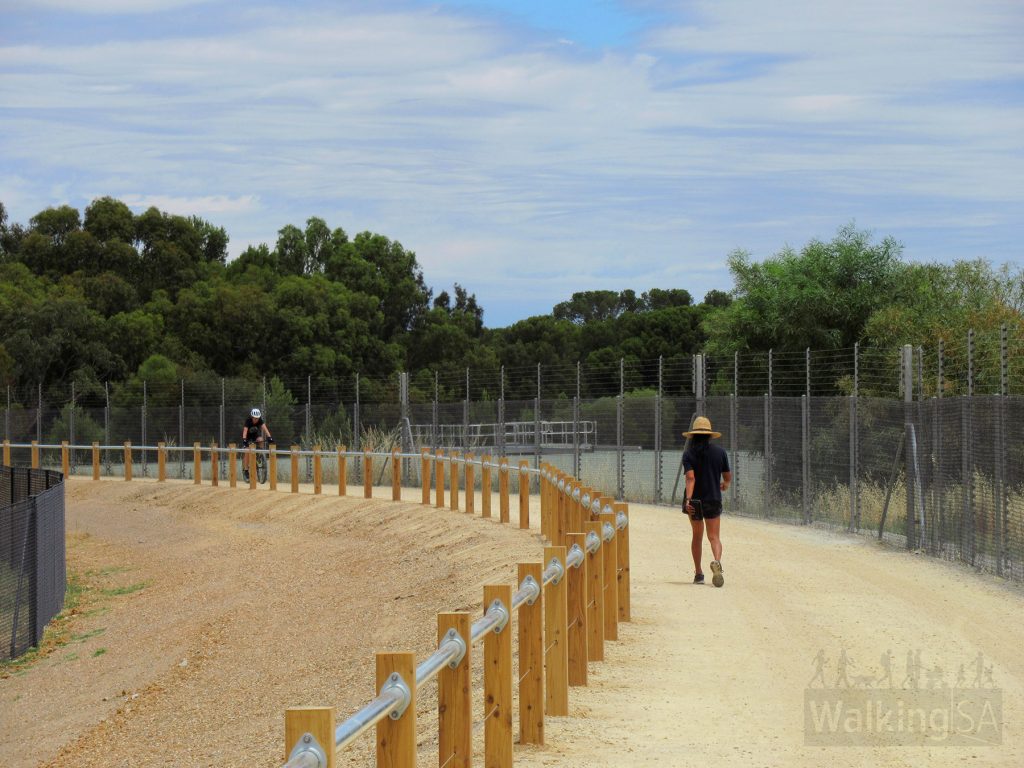 Walking towards the dam wall. There is no access to the water's edge or operational areas of the reserve 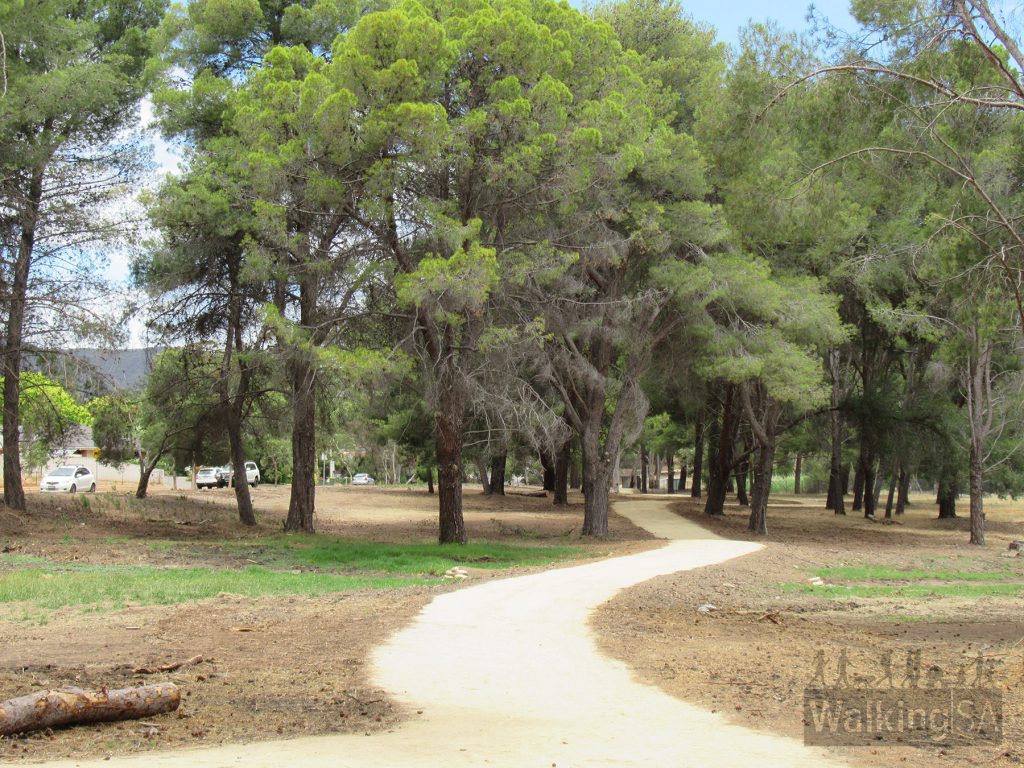 The trail south from the Awoonga Road entrance follows the road, set back from the road, before re-joining the roadside footpath 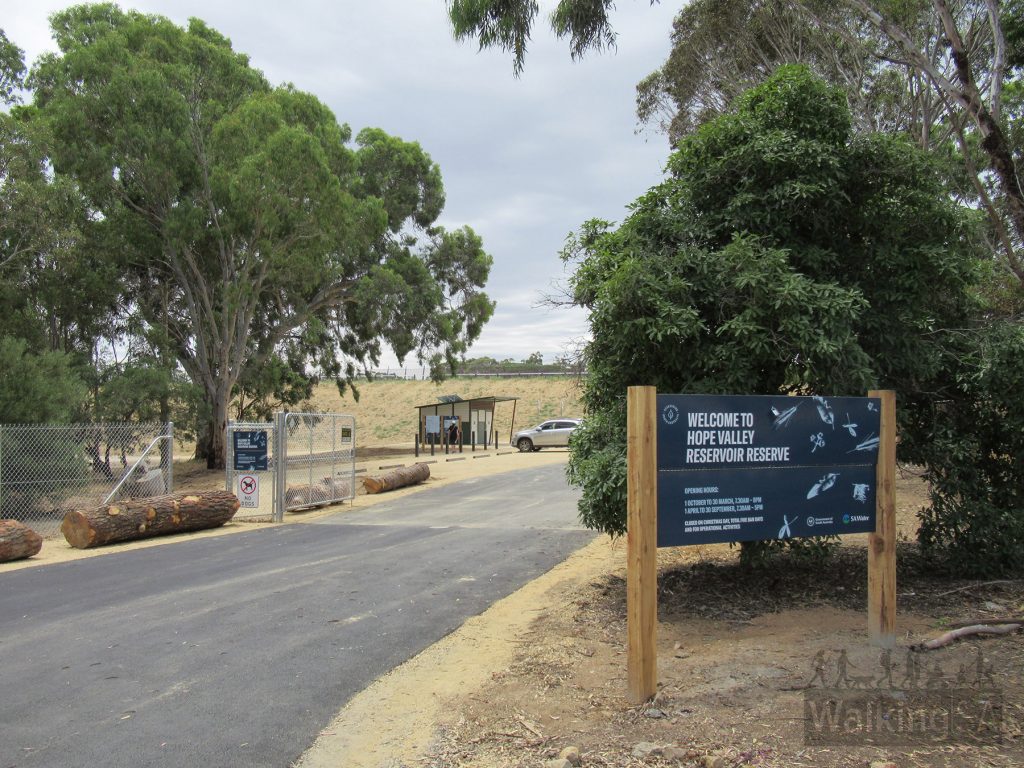 The main carpark off Lyons Road in Dernancourt 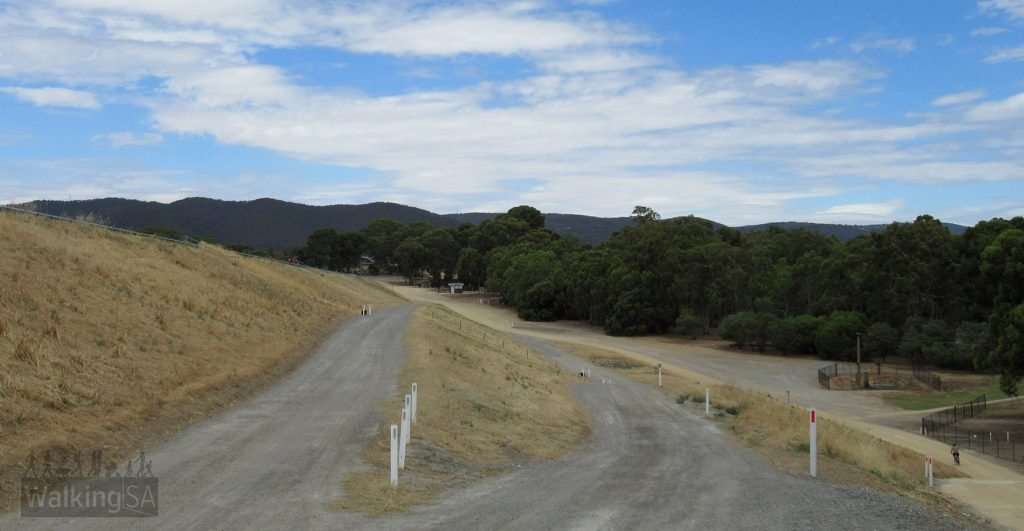 From the far end of the dam wall, looking south back to the Lyons Road carpark. There are several parallel trail options beneath the dam wall. 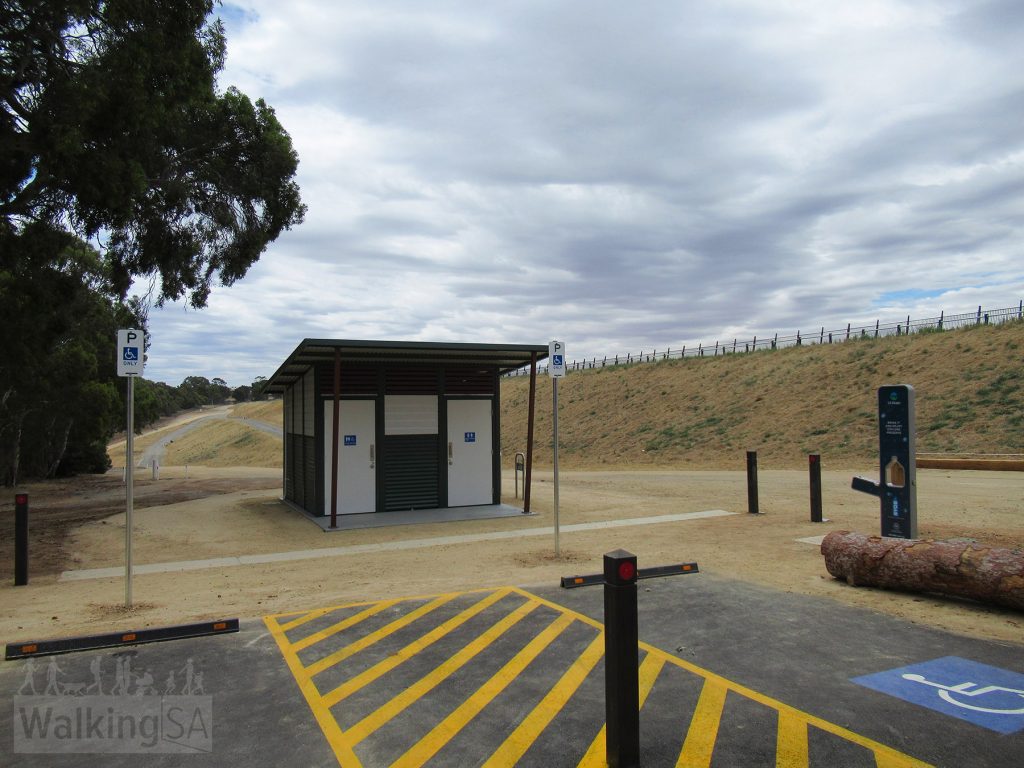 The toilets and water fountain at the Lyons Road carpark 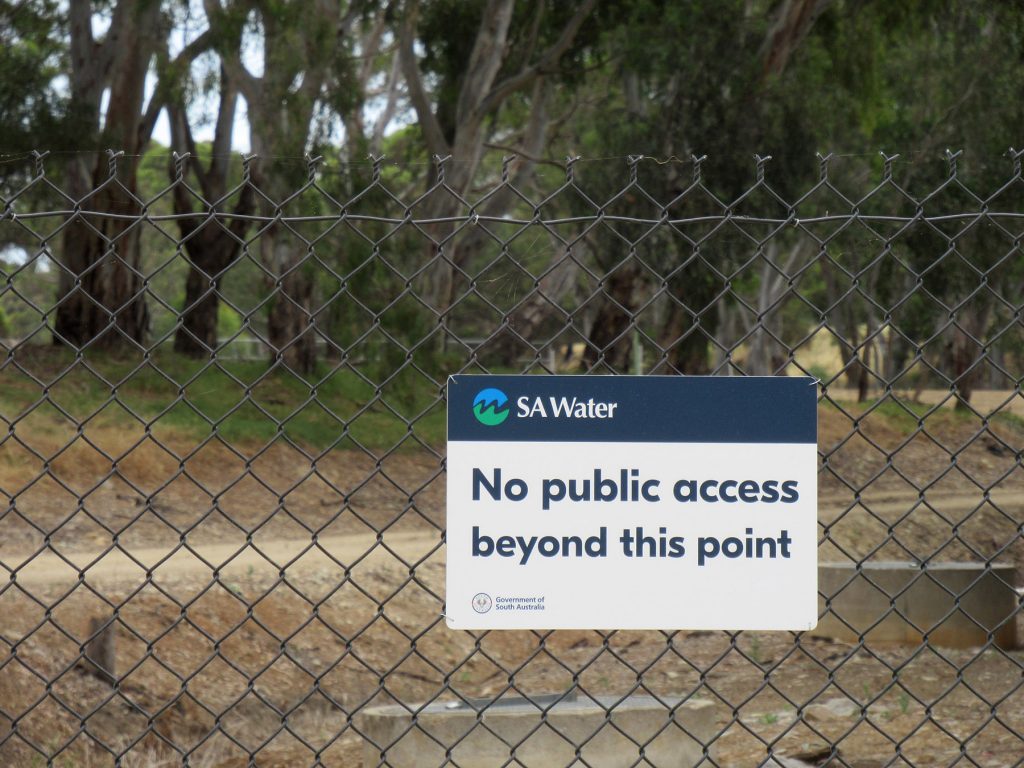 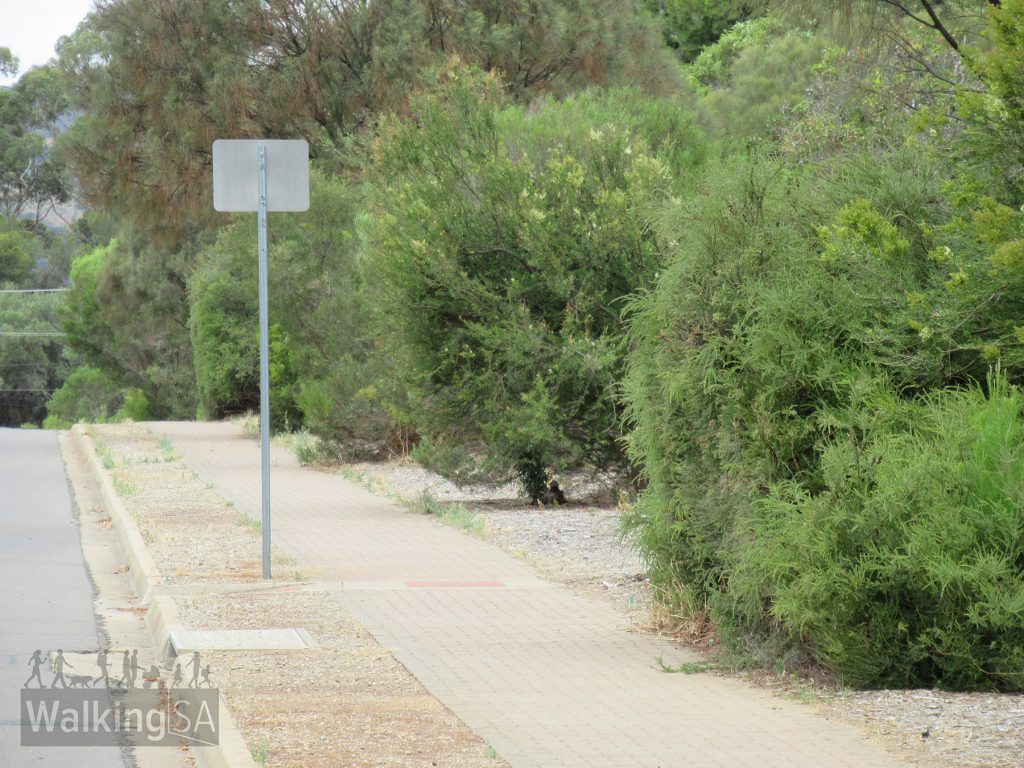