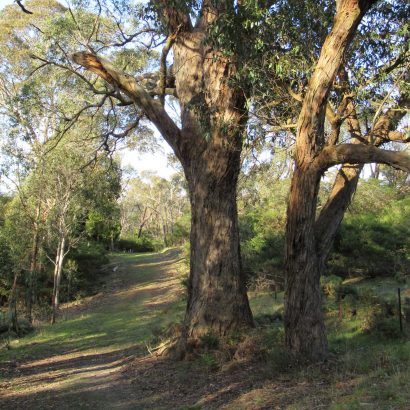 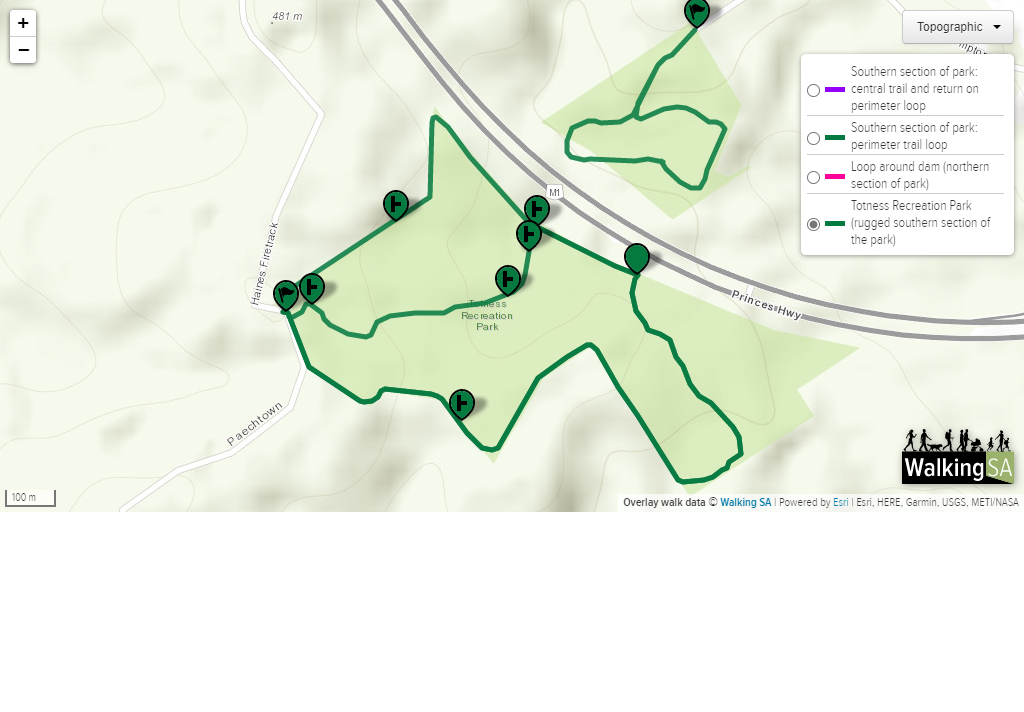 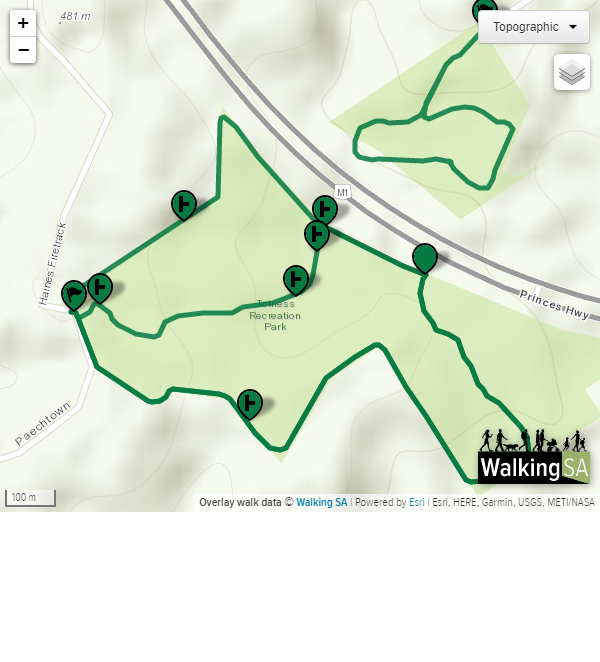 About the Walking Routes

Totness Recreation Park is a tale of two parks. The popular section to visit is the northern section, where there is a short easy walking trail around a dam. The southern section is larger and more rugged, and we’ve detailed two loops in it below, but this section of the park is hard to access by car and some trails are harder to follow.

This park is remnant vegetation including stringybark, blue gum and manna gum woodlands. The dam (in the popular northern section of the park) was constructed in 1884 to supply water for steam locomotives, the water piped 2km down to the railway station in Mt Barker. In the late 60s and early 70s the South Eastern Freeway was constructed, severing what was to become the park into the two sections we have today. In 1970 the park was declared a reserve, later becoming a national park reserve.

Unfortunately the two sections of park are not connected, and it is not possible to cross over the freeway. It’s quite the pity that during the freeway’s construction the opportunity wasn’t taken to build a practical tunnel, such as was done at nearby Bridgewater where the Heysen Trail passes under the same freeway.

Trail Options in the Southern Section

The southern section of the park is larger, more rugged and with walking trails and steep firetracks.

There are no marked trails (as in no arrows), but we’ve outlined two route options below.

The official National Parks and Wildlife Service SA map, dated 2019, indicates two walking trails in the park (distinct from the perimeter fire track), but the northern one of the two is very difficult to find, has many false trails and is very hard to follow. That official map could also be considered by some to be inaccurate in the eastern corner, as some of this land has been privately leased out, but you wouldn’t really get lost there as the fire track is easy enough to follow anyway. We’ve made some scribbles on a mud map to indicate these issues (we’ve marked that northern trail in orange on the scribble map). The main trail, which we’ve marked in purple on our scribble map, is easy enough to follow, and although it too has many false trails leading off it it is easy enough to stick to (just keep walking downhill).

These other trails in the park have probably been made perhaps in the first instance by kangaroos, but then used by people walking and riding mountain bikes. They make a bit of a mess of the park, so it would be better to stick to the main walking trail.

When walking along the walking trails in particular, keep a watch out for other trail users like mountain bikers, particularly on the downhill sections.

Getting there: This southern section of the park can be difficult to access by vehicle, as it is located along a road sign-posted with ‘Summer Track Only’ warning, and some ‘Fire Track – Authorised Vehicles Only’ signs – it is a public road, but it is narrow, steep, and can get very muddy. Access the Gate 5 entrance from the north-west via Paechtown Road, from the Echunga Road near Hahndorf, a drive of 4.2km. This route is shown on this Google Map with directions. The Gate 5 entrance is 200 metres beyond the ‘Summer Track Only’ sign and 100 metres beyond the ‘Fire Track – Authorised Vehicles Only’ sign. Access from the Darby Road end of the Haines Fire Track is longer, much steeper, and is a 1.6km long drive along the ‘Fire Track – Authorised Vehicles Only’. The first option we detailed, via Paechtown Road, is just much easier.

There is no space for parking vehicles at Gate 5, but there is a very small rough pull off area about 100 metres south of Gate 5 which *might* fit two vehicles.

You’ll need to work out your own directions on this walk. If you’re not confident to do that, the perimeter trail loop we’ve outlined below is easy enough to follow.

There are often less people in this section of the park, and more wildlife like kangaroos and kookaburras.

Start from Gate 5 on the Haines Fire Track. When you enter the park here, you will see a walking trail heading into the centre of the park, so follow this downhill into the gully. There are a few minor informal side trails, but stick to the main trail and keep heading downhill.

Eventually you’ll find yourself at a junction with the perimeter fire track, with the creek and stormwater pipe under the freeway nearby.

We suggest you turn right, following the fire track around the perimeter back to the car. We found this route (turning right, returning on the east and south side) more pleasant, with rural views, and nice views to Mt Barker summit. There are a couple of steep sections, and having walked downhill from the park entrance at Gate 5, there is no alternative but to climb back up. This will make a 2.6km loop.

You could turn left, it is a shorter route back to Gate 5 entrance, but some of the sections are steeper, and the views aren’t quite as good. This would make a 1.5km loop.

Following the fire track around the perimeter of the park is easier to follow, but there a couple of steep sections. Walking clockwise from the Gate 5 entrance, there is a particularly steep downhill section just 200 metres into the walk. The east and south side of the park is quite pleasant, with rural views and views to Mt Barker summit. 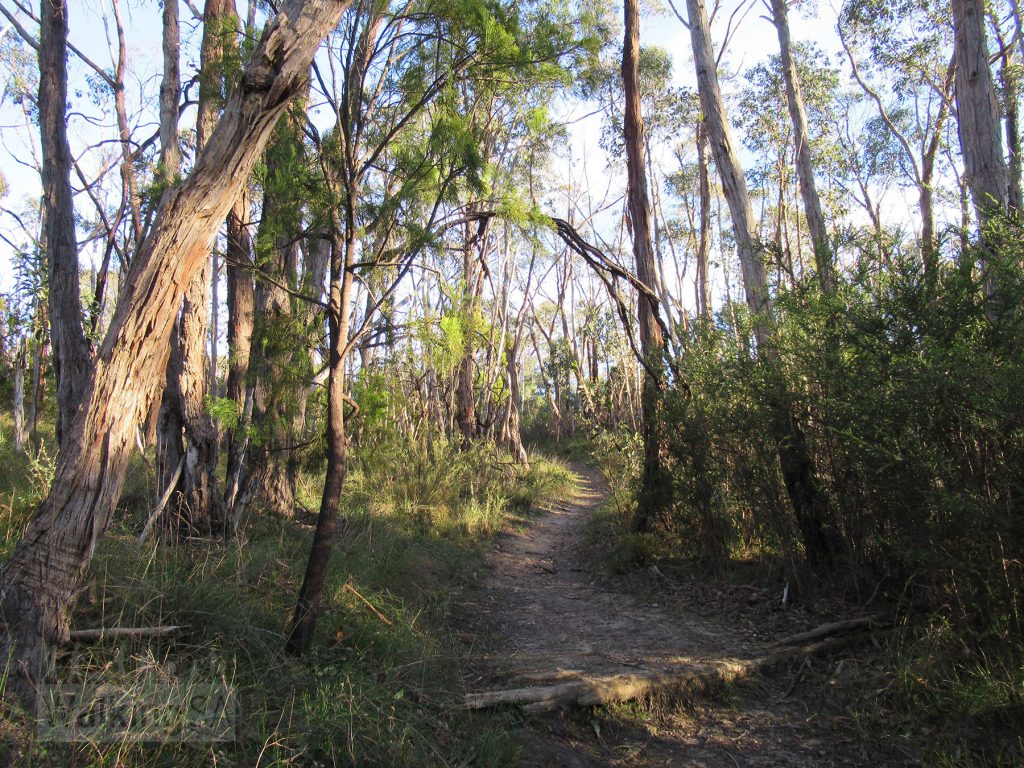 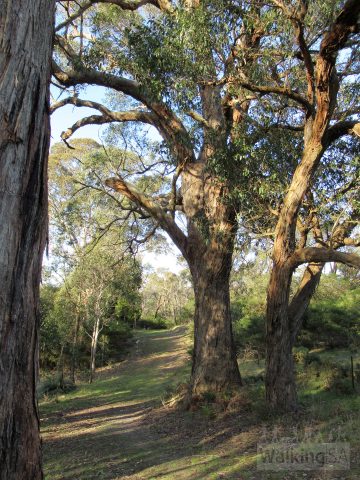 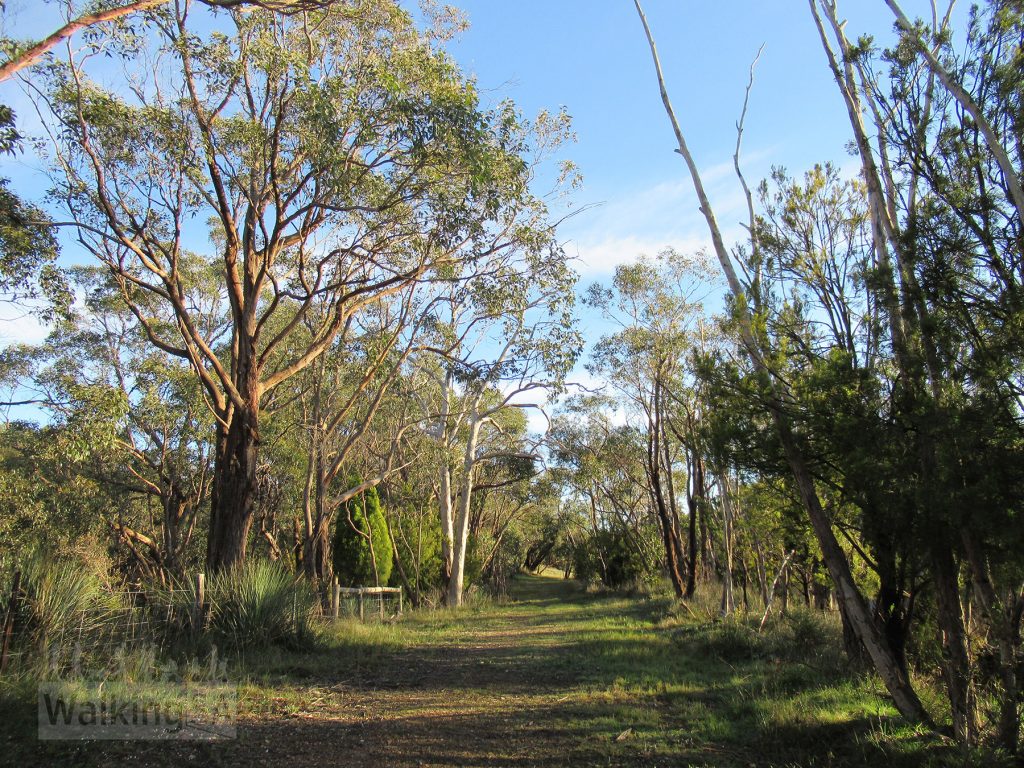 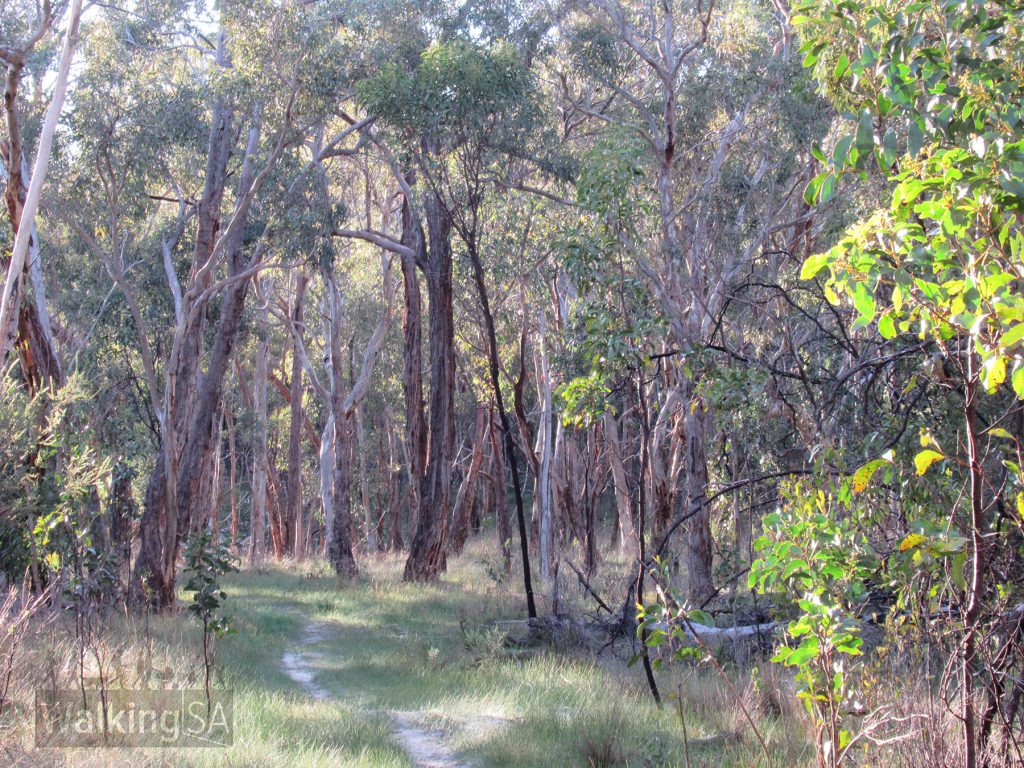 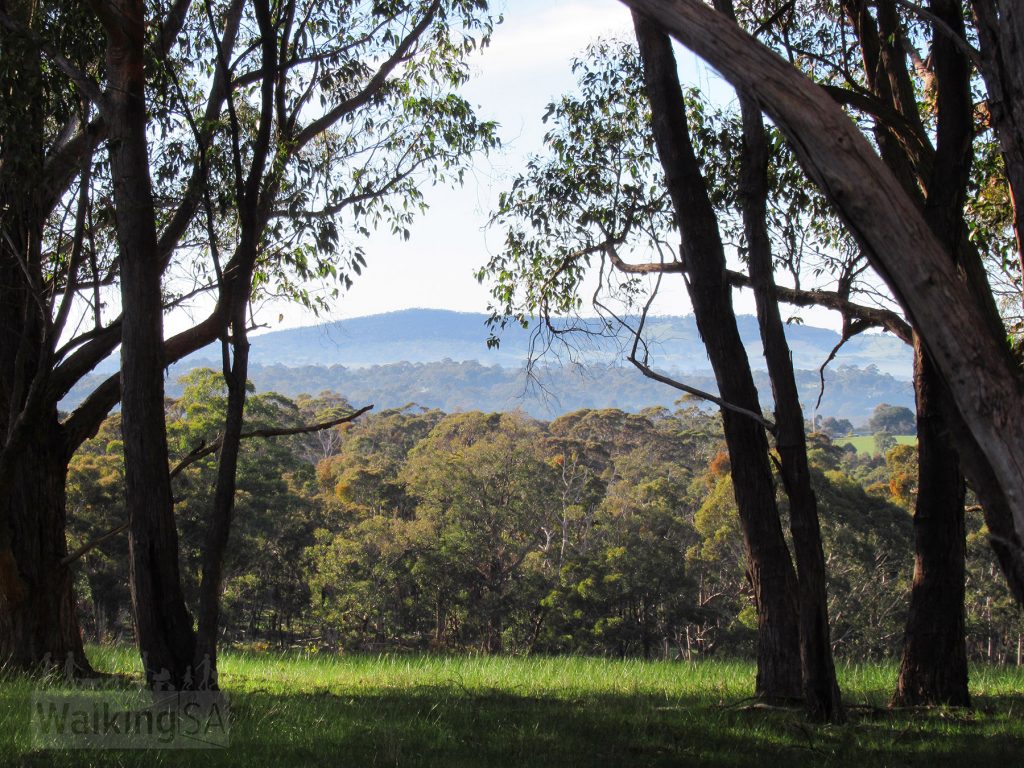 View of Mt Barker summit from the perimeter track, in the southern section of the park 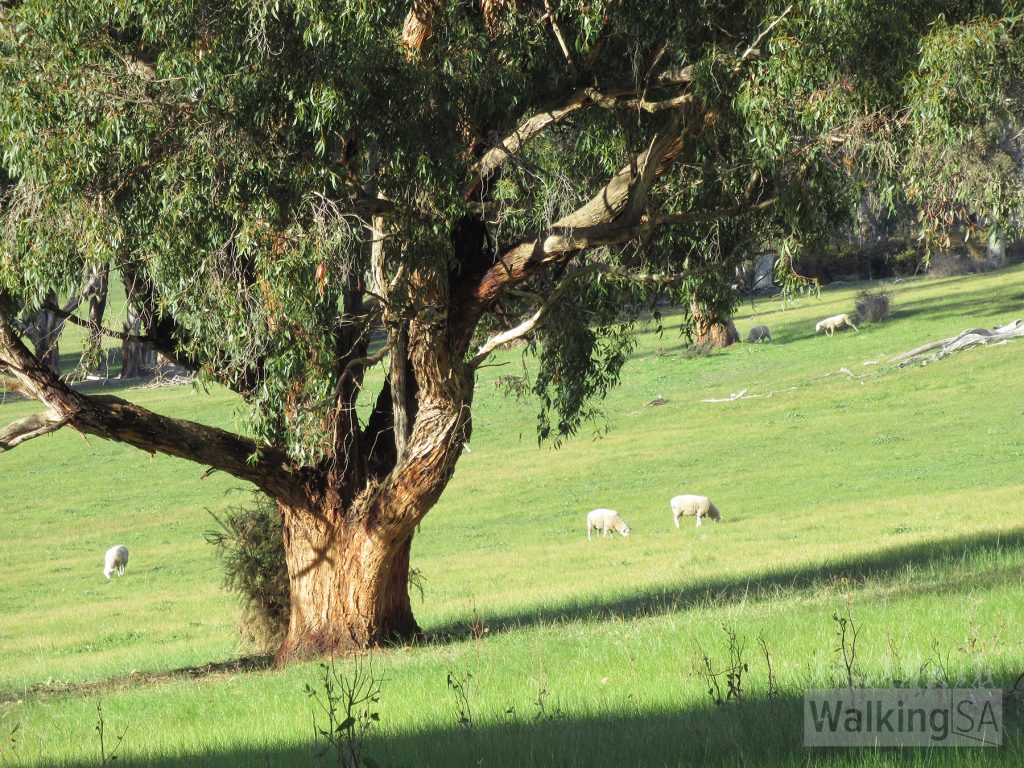 Rural views from the perimeter track, in the southern section of the park 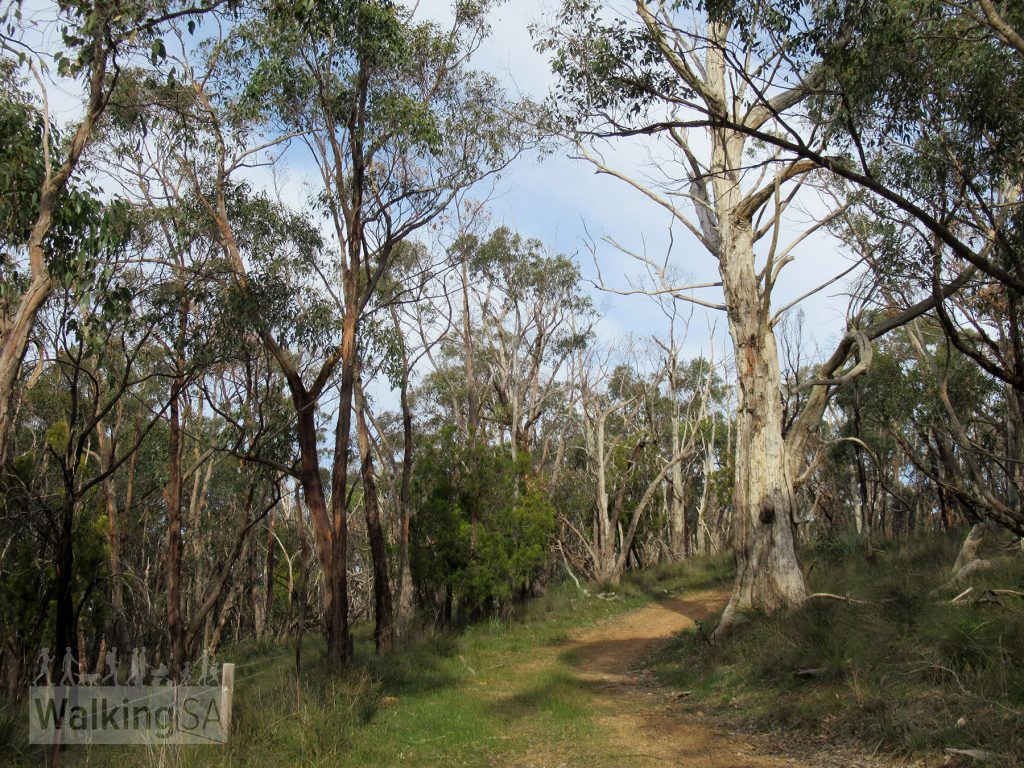 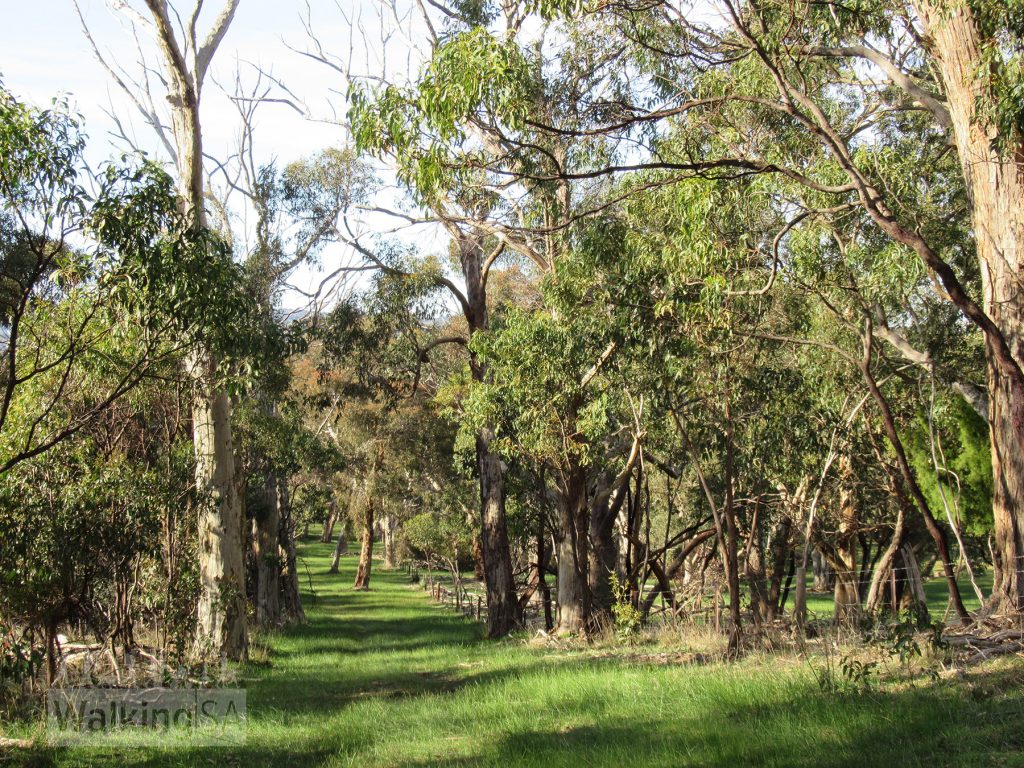 Some sections of the fire track in the southern section of the park are not well used by vehicles, so in winter is generally grass. That makes it sound that in summer it might be hard to follow, but it's always pretty easy to follow. 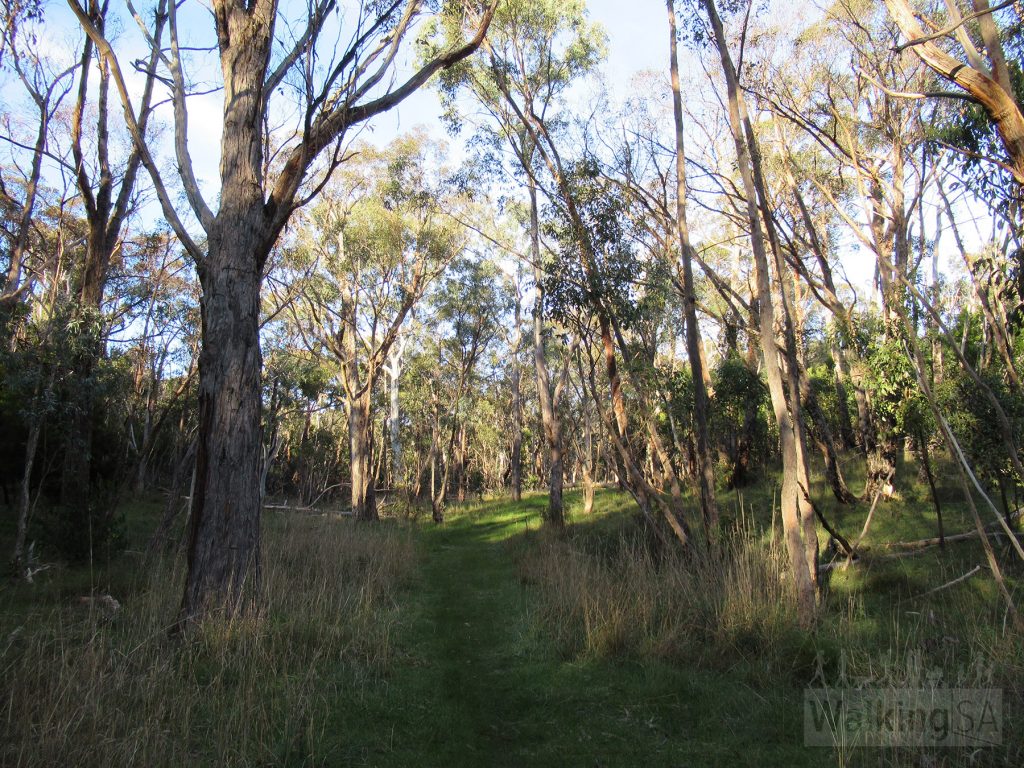 The second of the two walking trails marked on the official map, this trail is indistinct and can be hard to follow 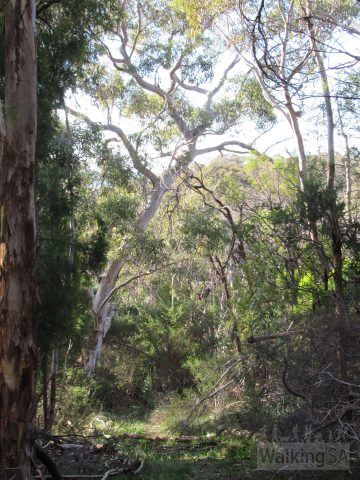 The second of the two walking trails marked on the official map, this trail is indistinct, overgrown, and can be confusing to try and follow 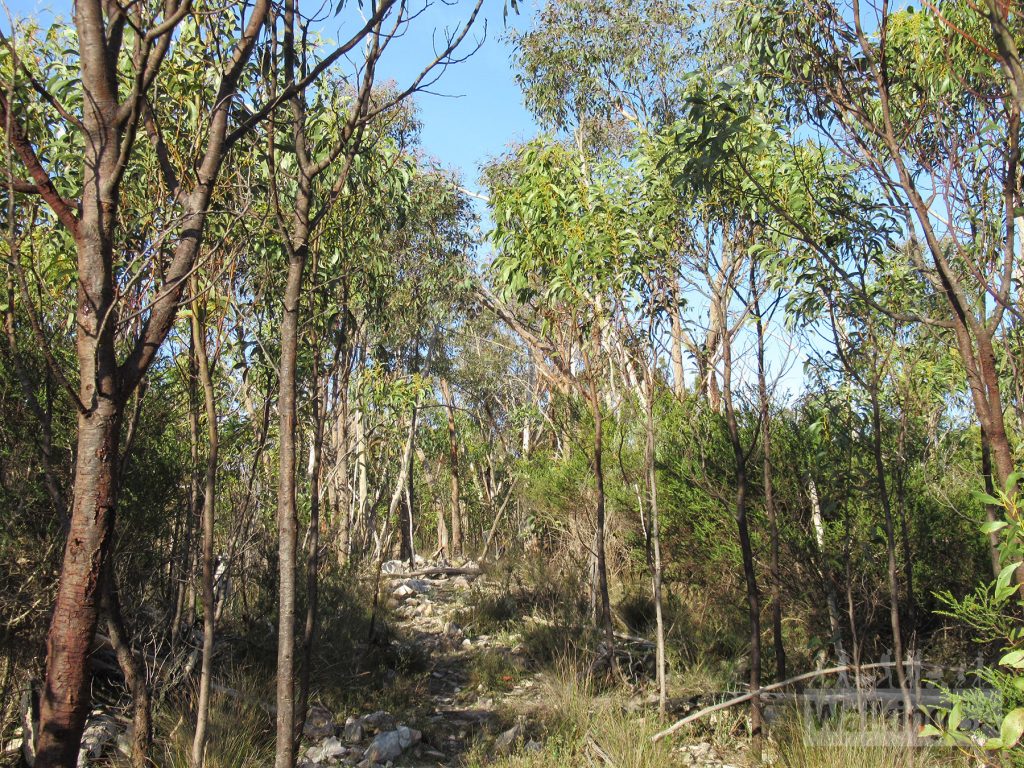 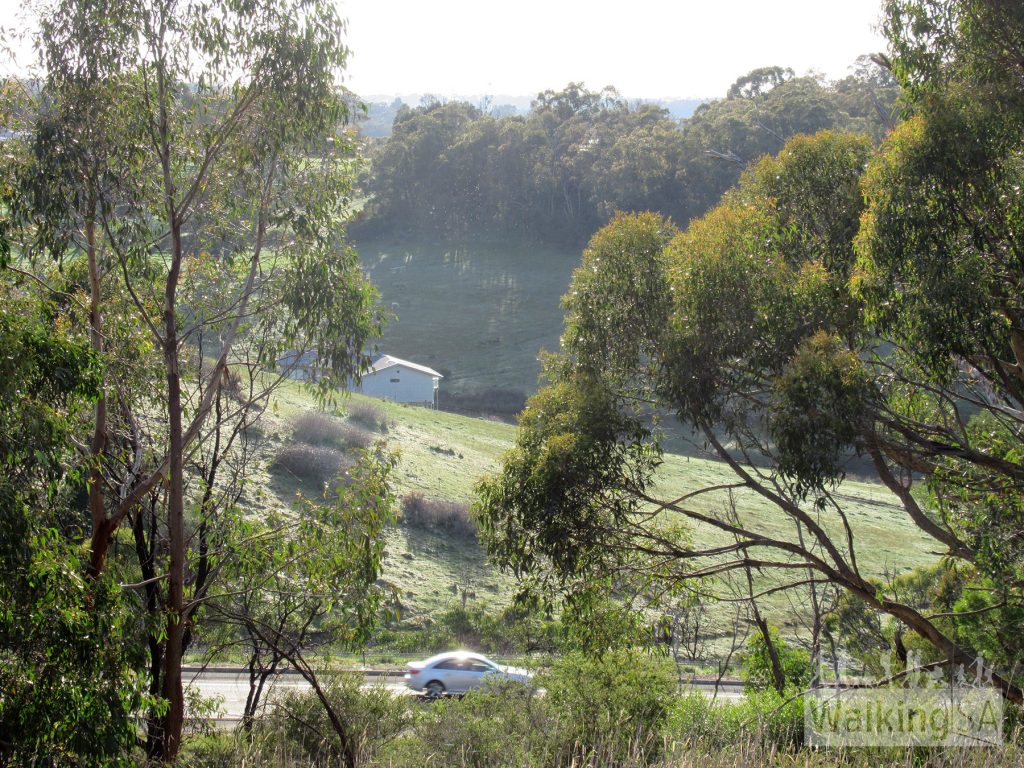 The freeway is never far away, as seen here from the perimeter track in the southern section of the park, but nonetheless glimpses of the freeway are rare